I’ve reached a point where I dread seeing time travel show up in games. It’s hard to do right, making it complex enough to be interesting but without completely borking causality between events. The Silent Age certainly doesn’t make it too complex, and in fact doesn’t make anything about itself too complex at all. It’s a very straight-forward adventure with straight-forward puzzles and a just-clever-enough story, It may err on the side of simplicity, but there’s enough going on to keep it from getting boring.

You play Joe, a simple janitor at looming megacorp Archon in the year 1972. A dying man leaves him cryptic instructions and a gizmo that propels him to 2012, a barren hellscape of abandoned cities and moldering skeletons. It’s up to you to help him puzzle his way to some answers, following the story as it careens between the grooves of the 70s and the desolation of Obama’s America. You’ll meet a few funky characters along the way, and find plenty of items to open doors, cross pits, and power things up with.

Joe is going to need a lot of help, because he’s probably one of the dumbest adventure protagonists I’ve ever seen. He picks up on absolutely no nuance, he cracks wise at the wrong things, and barely has the gumption to stand up to the crazy events that unfold around him. I wish I could say it was refreshing to have such an obvious everyman dealing with temporal conundrums but really his dopey ways start to grate after just a few chapters. You really have to keep in mind that you’re the driving force here, not him, and start to brush off some of his dimmer observations.

The challenges that face Joe aren’t the toughest either, but that’s more of a blessing than a simple-minded protagonist. Plenty of adventure games have puzzles that require bewildering arrays of items assembled in sequences that only make sense to those who coded them, but that’s not the case in The Silent Age. Puzzles here are simple and clear, with a limited inventory to use on logical barriers to progress. Not once did I come across an obstacle with a confusing solution, and the only times I got stuck at all were when I forgot to use the game’s time travel mechanic. 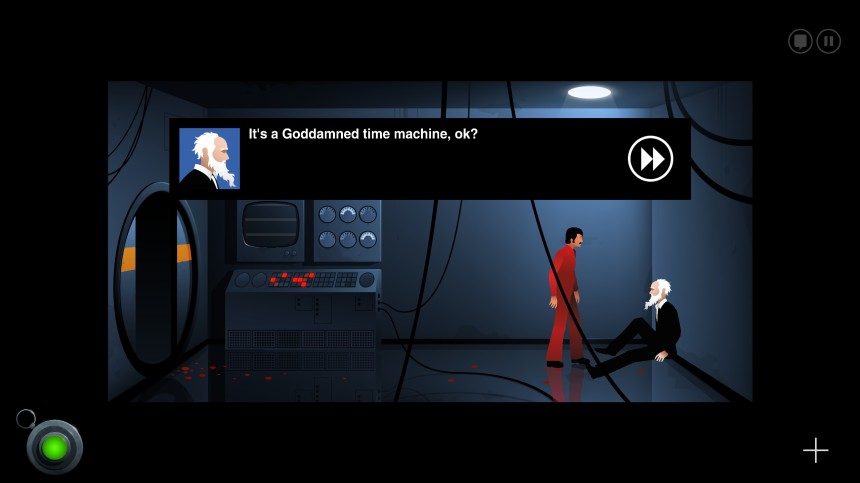 If you want complexity you’ll find it in the story, which tends to be unavoidable in time travel tales. It’s the good kind, though, with an existential threat that needs to be stopped through comprehensible means. There’s a bit of dialogue that works well enough but most of the story comes in two big plot dumps that put Joe on the missions he needs to complete to save the world. I wouldn’t call it the best way to get the point across to the player but it fits with how simple and direct the rest of the game is. And if nothing else, it does a good job of building stakes and tension all the way through to the finale.

The game looks about as clean and simple as it plays, with untextured shapes and bold colors painting the world in stark contrasts. The sound design is fine as well, but ironically is the only place the game doesn’t go hard on the 70s themes as every other aspect will remind you constantly of lava lamps and the Cold War. What The Silent Age lacks in subtlety and depth it makes up for in playability and quality, so if you’re here for a steady, entertaining tale you’re sure to get it.