Games can offer experiences beyond what is physically possible in the real world, which shouldn’t come as a surprise to anyone who’s ever sent Mario soaring ten times his own height to smash a brick cube with his fist. In recent years more games have experimented with warping the realities they offer players, and Antichamber might be the purest concentration of those efforts. Much of what you see and interact with in this strange, stark world does not behave as you would expect, adhering to its own internal logic. And while the game never really rises to anything more than a collection of oddities, it succeeds on the strength of its progression of puzzles.

Antichamber opens with you standing in a sort of testing chamber. One wall lists the game options and controls, and another displays a map of whatever place it is that the game unfolds in. Selecting a spot on the map transports you into the oddly white labyrinth of chambers, hallways, and puzzles to solve. As you progress through the game you’ll find clipart-style posters with inspirational-sounding clues that get checked off on a third wall in the menu room. There’s no direction for what you’re doing but you’ll find your bearings soon enough, along with goals to work towards as more of the labyrinth is revealed. 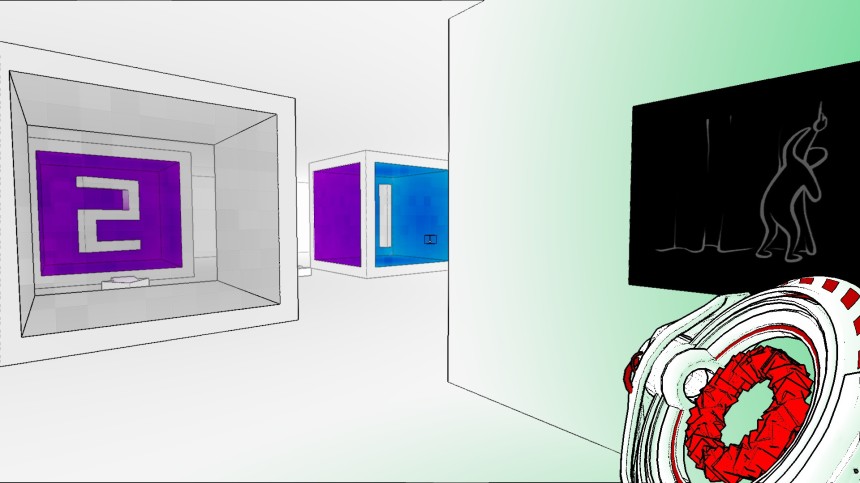 Your first hour in Antichamber is going to be a confusing mess of progress, and this is a good thing. The early puzzles ease you into the thinking necessary to tackle the challenges ahead: Experimenting, finding new perspectives, testing the waters, and so on. No two hallways can really be expected to work the same way. One might drop the floor out on you, one might split unexpectedly, one might dead-end and open a new path when turning back, one might only be traversible by walking backwards, and so on. The real tasks here are not figuring out how to solve a puzzle, but rather figuring out what the rules of the puzzle are. You’re not facing sliding blocks or Towers of Hanoi, you’re facing rooms with no floors and doors with no handles. The solution is always simple, but recognizing its existence is not.

That’s not to say there are no proper puzzles to be had. Eventually you’ll find a device that lets you pick up and place small cubes which are used in all manner of more conventional brain-teasers like building staircases or blocking sensor beams. It’s also used in far less conventional puzzles, of course, and there are some very clever upgrades to be found alongside discovering new uses for manipulating matter inside a world with mutable rules. I enjoyed working out the mysteries of each room but the block puzzles using your cube gun thing were the real highlight because they tend to be very constructive challenges. There was one specific one that frustrated by way of how picky the solution was but all the rest were little pleasures to tinker about with. 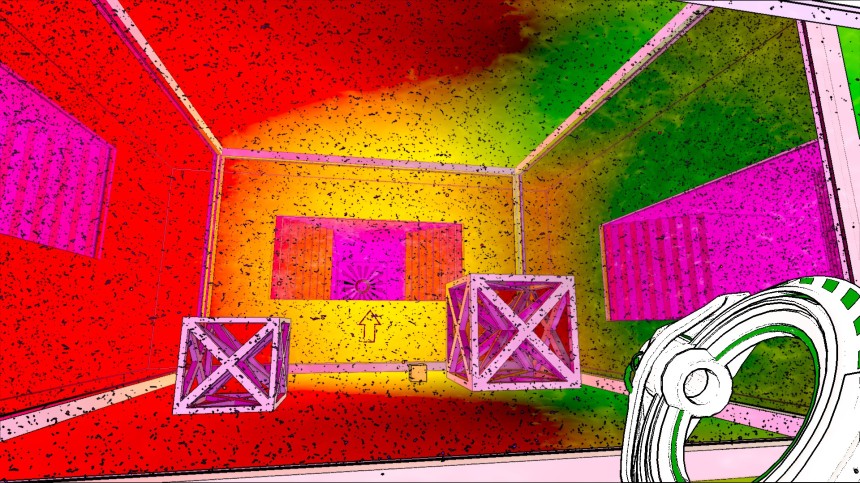 You’re bound to reach dead-ends as you explore the labyrinth, in fact the path you’re most likely to take the first time in dead-ends to demonstrate how that original menu room works. Pressing Escape at any time teleports you right back to that chamber, where you can then use the map to teleport directly to any puzzle room you’ve visited. It’ll take a little work just to puzzle out how exactly the map works but it’s a surprisingly effective system for keeping the unconventional expanse comprehensible and easy to access. It took me about three hours to reach the end of the game (featuring an unexpected expansion of scope) and I found maybe 80% of the posters along the way so I know there’s more to be found than just the conclusion. I wouldn’t expect any huge secrets or revelations, though… if you haven’t cottoned to it yet, this is very much a game about the journey, not the destination.

The stark whites, bold colors, and strong outlines cut a striking image for the game to play out in, perfect for the surreal puzzles you’ll be tackling. Any special features modeled in 3D tend to look pretty impressive too but flat images like the posters and other wall elements tend to be fuzzy and break immersion a bit. The sound design is just as minimalist as you’re imagining but include some very nice ambiance in areas and terribly pleasant wums and blips for your matter manipulator. As a whole Antichamber isn’t much more than a funhouse filled with tricks and subversions of game experiences, but they’re executed and connected with masterful grace. I never felt like I fully understood everything that happened, and that lingering mystery proved more gratifying than the satisfaction that so many other puzzle games have offered. If it’s a labyrinth of possibilities you’re seeking, you can get lost in this title for hours.