The kingdom of Namariel was humming along just fine until the Iron Lord showed up with his legions of scrappy robots, blasting the castle into submission and dethroning its king. The only child of the royal family gets rather hilariously chucked out a window and saved by a passing dirigible, and then the game fast-forwards about 15 years to your Edward-Norton-looking uncle recounting the story to you, who DEFINITELY isn’t the lost kid or anything. A chance encounter with the Iron Lord’s tinpot soldiers starts you on a journey to save the whole kingdom from his cold, unfeeling grip. 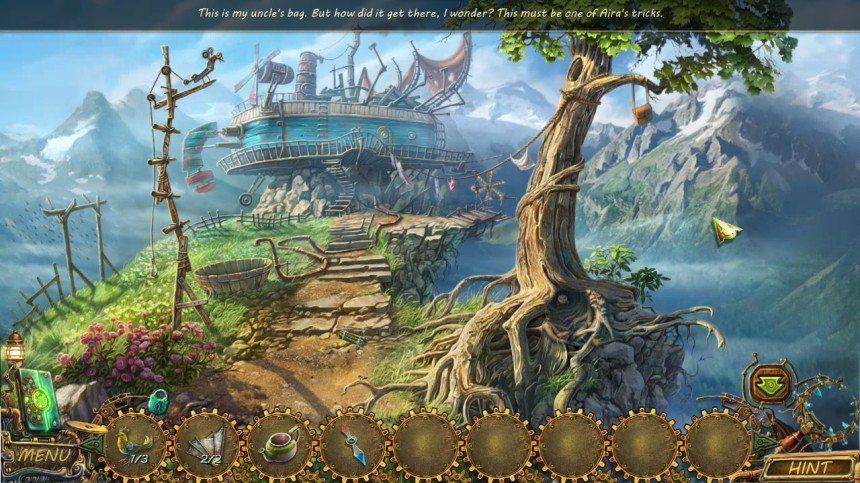 Mind you, this is going to play out with all the jank and circumstance of a hidden object game. You’ll wander off to collect crystals and engineer a pulley system to get a bag out of a tree, and come back to your uncle being dragged away by robots. At one point, a big bad will blow up his own airship just to get rid of you. And you’ll spend like an hour doing chores to eventually take down a giant Ferngully-style deforesting machine, only for the grease monkey child pilot to join up with you just because. Things will happen because they have to happen that way, and you’ll go along with it because most of the game is just mindless clicking anyway.

Every scene of Namariel Legends is from first-person, looking out over some expanse of cave or workshop or forest. They all have items laying about to nab and use in other nearby areas to get yet more items or, on rare occasions, help people out with some problem like being hungry or stung by bees. Parts of the scenes can be zoomed in on for closer looks, and your pointer icon helpfully changes to indicate whenever you can pick up or focus on something. The puzzles involving these items and environments are extremely simple and only require you to use single items to progress; there’s no combining or interacting with items beyond that.

This makes for an extremely thin puzzle aspect to the game, which doesn’t pair well with the extremely thin story and virtually non-existent NPC interaction. There are some additional gimmicks like a mindscope that lets you read thoughts, necessary for a few puzzles involving animals, and a flying robot helper who you’ll need to knock down ladders and shake loose fruits every few screens. Even with these though, there’s not much more going on than just having to remember to use them. That just leaves the few actual puzzles, which at least tend to be more creative than the usual ones you get in hidden object games. There’s an interesting keycard puzzle that requires moving links of a chain, recasting broken keys from start to finish, and some mazes with tricks to getting around them (though a few of these are a little longer than they should be).

You’ll be doing all of this in a fairly well-realized steampunk world that doesn’t go bonkers with gears on top hats or anything like that. The scenes are clear and detailed, and you’ll run into some creative machines and creatures as you roam the fanciful lands on the way to the embattled castle. This is hardly a groundbreaking or even challenging title, but it’s not trying to be, either. Hidden object games exist to pass the time between more substantial activities, and taking the hidden object scenes out of one just makes it an equally casual point-and-click adventure. If you’re looking for something with plenty of clicking through simple scene and puzzles, this will definitely get the job done.