Unlike most games, the most important part of a successful adventure game is the writing. Puzzle design is obviously very important (especially if you’ve ever ruined a playthrough in a Sierra title), as is the art, sound design, and interface. But nothing can save a poorly-written point-and-click from being miserable to get through. Expertly-written adventures are rare but they do exist, and I would put Broken Sword up among some of the best. It’s enough to help carry the game’s glacial pacing and tricky puzzles, and more than enough to make for a very gratifying experience.

Nico Collard is a small-time French journalist in Paris who doesn’t let her standing stop her from chasing the big stories. Summoned to meet with an esteemed French statesman, she arrives to find him dead and bearing a clue that embroils her in a world-wide conspiracy. This adventure also sweeps up one George Stobbard, an impulsive American fellow committed to helping Nico crack the case after nearly getting blown up at a cafe. Together they unravel an age-old mystery that will be familiar to fans of Assassin’s Creed, except with more interesting characters. 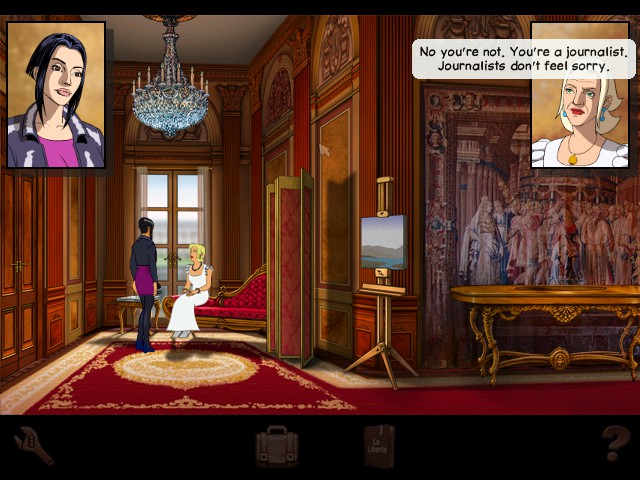 That’s where the magic lies in this title, in the people. Broken Sword is a much talkier adventure than most, with most of your progression and puzzle solutions found in speaking with the colorful cast. From the hard-nosed police chief to the gravelly flower lady to the brash and suggestive British widow, Paris is full of charming characters to question, joke, and debate with. Nico is sly and quick-witted in her dealings, while George is about as close as we’ll ever get to a modern Jimmy Stewart in his jibes. Every person in their quest has some quirk that swiftly endears them to the player, as well. An early favorite of mine was a security guard whom George convinced he was a sewer investigator, and who would offer whatever help he could every time George emerged from the manhole near his building.

To be fair though, the writing and dialogues are not always perfect. It’s an aging game in a lot of ways, and a very small number of characters play on stereotypes that are more cringeworthy now than they were then. Not all the jokes land quite as well as they might have twenty years ago, either, but the majority are the timeless type of clever that work best for adventures. The voice acting is more than up to the task of delivering them, but the audio quality itself is conspicuously lacking. And in one more little annoyance, the text boxes that accompany the speech are positioned to cover up the portraits of the characters who are talking. 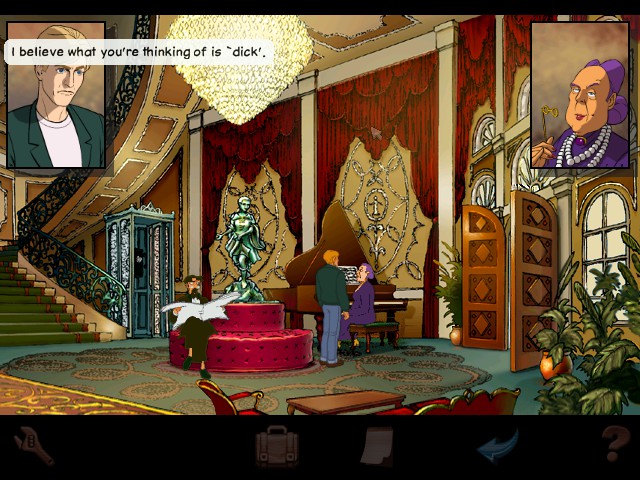 The net effect is a solid, enjoyable romp that simply feels older than a “director’s cut” re-release should, and that extends to the actual puzzles as well. As I mentioned, most of your progress will be made in speaking to characters of interest and gathering clues to the next part of the mystery. Dialogues are easy to navigate with graphical cues, and people give terribly funny responses to unnecessary or inappropriate questions so it’s all good. As for items, Broken Sword is one of those old-fashioned types that gives a small number of extremely specific or unusual doodads that often have an obvious use early on, and a much more unexpected one later. This can make the actual puzzles involving hidden tombs or lifting keys more complicated than expected, but limited interaction points and inventory ensure you never get stuck for long.

I’m a big fan of the hand-drawn pixel art style, and though the cutscenes tend to over-animate the characters it’s a welcome change from overwrought motion comics that so many adventures (and games in general) use now. Despite the excellent animation it doesn’t look great blown up or smoothed over, so prepare to play this one in a tiny window if necessary. Additionally, if you want the fully authentic experience your purchase helpfully includes the original Broken Sword for free. Either way you go with this one you’re in for a treat, though, because Nico and George and everyone here are some of the most entertaining folks this side of the old LucasArts games. If you like your adventures character-driven, you definitely owe this one a try.