There are so many competing visions of the future in media that it makes the fully-realized ones stand out all the more. After all, it’s easy to envision a blasted wasteland or an ocean of shimmering glass towers but not so easy to envision how to get there. Technobabylon has no problem clearing both of these hurdles, establishing a thoroughly wired world of networked decadence built on the ashes of the old order. But what makes this title truly remarkable is how that is the very least of its narrative accomplishments.

Set in the advanced, AI-directed city of Newton, Technobabylon follows the stories of Latha Sesame, a Trance-addicted (think super VR internet) young girl from the slums and Charlie Regis, an investigator for the previously-mentioned AI’s management bureau. Their tales dig deep from the introductory scenes of poverty and squalor on Latha’s side and cold authority on Charlie’s. Both are brought together in a very clever way as the plots involving them expand to encompass Charlie’s tragic past and hand in what the city has become, eventually touching on the underlying conflict between the rigid governance of the present and the chaos that preceded it. 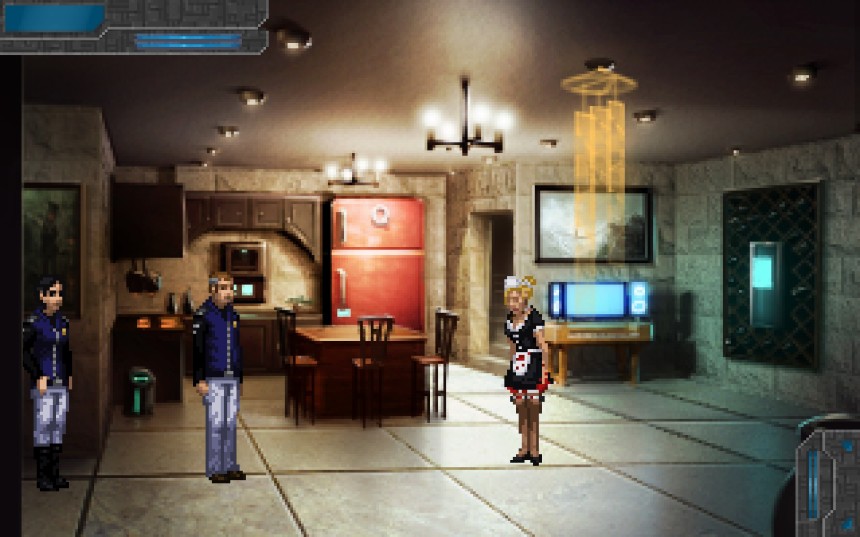 I know I’m talking about the plot in terribly vague terms but for a game that’s around six hours long, there is an incredible amount of narrative twists and turns crammed in there. From humble beginnings trying to puzzle a way out of a locked room and investigating a murder scene, you’ll be taken on a whirlwind tour through the wars of the old world, the AI dominance of the city, heartbreaking personal tragedy, blackmail plots, conspiratorial uprisings, and terrorist attacks. There’s so much going on here that you’re sure to get sucked into the story by something, and once you do it all starts to fit together in a masterful puzzle that may have more relevance to our present society than we’d like to admit. The dystopian themes are strong here and surface everywhere you look, from the gruesome extents that gene engineering reaches to the differences in food machines throughout the game.

What really sells the narrative here though are the characters that you share it with. Technobabylon features some of the best writing and voice acting to be found on the indie end of the spectrum, forming connections between you and people having to deal with organic computers in their brains and explosives in their bones. The natural, flowing dialogue keeps the game grounded even when the plot takes off, and I don’t think the game would have worked half as well if not for the excellent deliveries of the entire cast. Charlie and his partner Lao in particular have a wonderful interplay that speaks volumes about their personalities and relationship from even the smallest conversations. And it deserves recognition that similar attention is paid to every character in the game, no matter how minor.

As an adventure game, Technobabylon limits your movements more than most but makes up for it with the aforementioned dialogue and equally clever puzzles. Interaction is simply left-click for use or pick up and right-click for examine, and there are never more than five or six items to juggle at a time. Figuring out how they work together is the challenge, especially with the introduction of some surprisingly deep side mechanics. Latha, for example, can enter the Trance which is a VR network interface. Using organic computing material she can connect to everything from vending machines to door locks and interact with them in cyberspace as you would any other character. Charlie also gets some neat gadgets like a future cellphone that can manage data and network connections, and a gadget called an AI splitter that I won’t describe but is used in one of the most clever puzzles I have ever seen.

Still, each chapter is comprised of only a few scenes and usually revolves around a single central goal. It’s not a bad way to handle the gameplay in light of the complex story it supports but it should be noted if you’re more a fan of wide-open adventures. This one has also made me appreciate LucasArts-style deathless adventures all the more because in the few scenes where death is a possibility, it’s not handled all that well. There’s one scene where almost everyone playing is going to die at least once, because literally the most conspicuous object in the room is a crate and it will get you killed instantly if you try to interact with it at all. The art style honestly doesn’t help this or the matter of finding items, as the chunky pixel style isn’t a great match for the slick, detailed world around you. Still, these end up being minor gripes when viewed against the towering success of the story and puzzles. Technobabylon was a pleasant surprise, one that grew more and more impressive the further I delved into its secrets.