It helps for a game to have a clever hook, but it needs more than just that. Doing something outside the norm is great as long as that’s expanded into a full game and not left to prop the whole thing up. Bardbarian has a cute premise but really doesn’t go much further than that, seemingly expecting the one joke it’s built around and a few cameos from other indie games to carry its terribly thin gameplay. That works for an hour or so, and then it just becomes a grinding slog without a punchline.

Bardbarian is the tale of Brad, mighty barbarian and defender of some dinky village with a giant, important, and otherwise unprotected crystal at its center. On this particular day Brad doesn’t feel like vanquishing evil, instead opting to fashion a guitar out of an old battleaxe and jam out. Luckily for him, the villagers, and you, this inspires all manner of mercenaries to come to his aid, shredding monsters as he shreds and drawing power from his power chords.

In other words, you control Brad but you never attack on your own. You can call in one of three chosen units when you have enough chords (generated passively) which will follow you around and attack things within their range. At first you can only call three helpers at a time but through the game’s gold-powered upgrade system you can raise that limit, as well as upgrade each mercenary. Brad can also spend chords to buff his team in various ways, and stun enemies when he reaches certain killstreaks.

Monsters come from three lanes on the right and trundle towards your crystal on the left, and if either that or Brad is destroyed, game over. Your minions also have health, so you’ll need to weave your whole formation through the lazy projectiles your foes will lob. The game is broken into four chapters of five lengthy waves each, with a boss on the fifth wave. Everything drops gold for you to buy upgrades with between runs; once you start playing you’re locked into what you have until you win or die.

This is where the game starts to wear thin, because death is going to be stopping you pretty regularly. There’s a significant jump in difficulty between chapters, mainly because of enemies getting huge health and damage boosts. Little critters you could kill in 3 arrows suddenly take 12. It feels like the power curve of a mobile game, forcing you to grind on your current level before unlocking enough upgrades to stand a chance at the next. That’s exactly what I did, too, playing chapter 1 until I had the archer units fully upgraded, along with a larger squad size and higher base levels and other stuff. Chapter 2 was still a challenge but I pulled it off, and then Chapter 3 immediately kicked me in the balls until I died. 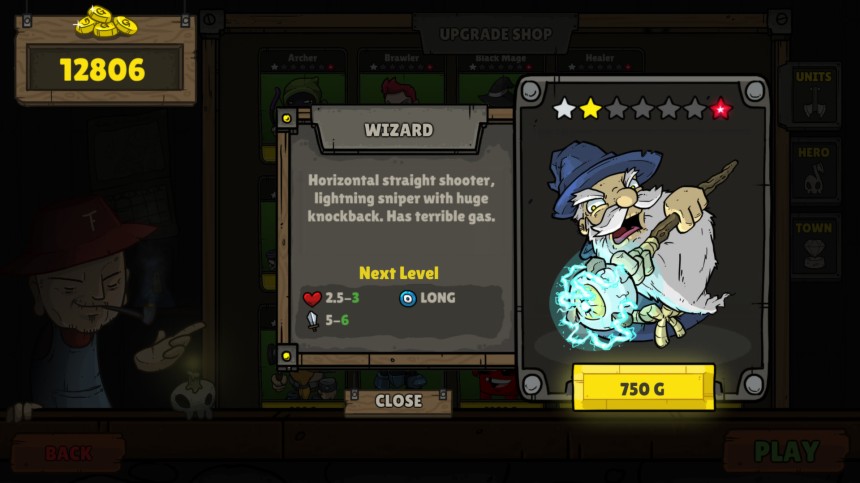 Ultimately the upgrade system is going to be your main focus, and it isn’t even that interesting to begin with. Unit upgrades just make them generally beefier but the early units don’t hold a candle to the later ones you unlock, so you can waste gold on guys that can’t carry you to the finish line. There’s a 2x drops unlock that’s basically mandatory but terribly expensive, and the squad size upgrade is obviously the most important but scales ludicrously in cost. It’s going to take a lot of grinding the same waves over and over, which will exacerbate how slow and long they tend to be, and how little you actually need to do besides dodging bullets.

Even the actual combat is underwhelming, with slow projectiles and weak sound effects for all of them. You get virtually no feedback on damage, either, with a hit doing a sliver of health and a hit one-shotting you looking and sounding exactly the same. There’s very little variety in enemy behavior as well, and that extends even to the bosses. And forget about the survival and escape modes, because they dumb down the gameplay even further. Like I said, it’s a cute concept to hang a game on but Bardbarian is paper-thin, offering little in the way of content or challenge to keep you rocking along.