I’m pretty sure you’ve played this or something like it on a Flash site before. Take a hapless mook and rough ’em up with explosives or bicycles or catapults or what have you until their ragdoll spasms get a chuckle out of you. I didn’t expect much from Happy Room and I got exactly what I did, plenty of silly, gory action with goofy contraptions. And it even exceeded my expectations in a few little ways, enough to keep me chucking clones into the meat grinder.

You’ve got the best job in the world, testing weapon systems on meaty specimens without any of those pesky ethical concerns to stop you. Starting with basic mines, spikes, and guns, you earn additional funds for new instruments of destruction as you prove the worth of the tools at your disposal. These quickly branch out into useful and goofy devices like launch pads, zero-gravity generators, buzzsaws, morning stars, and so on. There are also special objectives to complete for bonus funds and points to upgrade your weapons with. The more damage you do, the more damage-dealing goodies you get to play with. Simple. 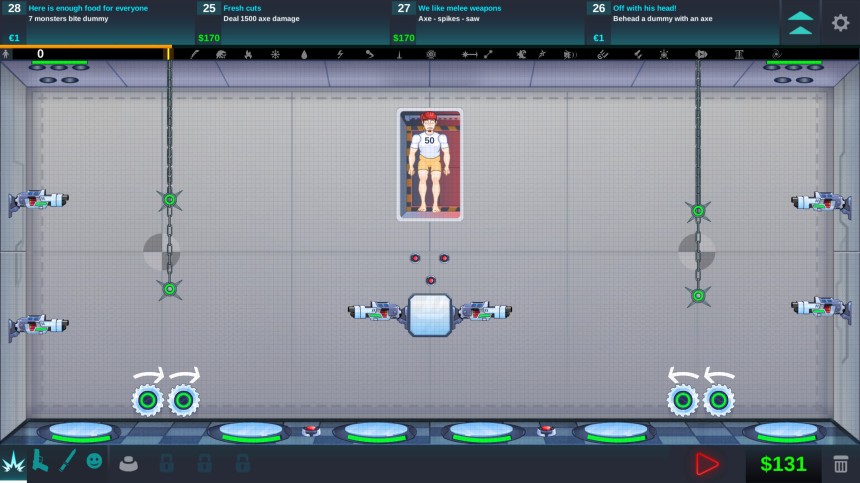 A typical gameplay loop consists of setting up your murder chamber, running the test, and then seeing how things panned out. If you didn’t beat your previous best you don’t get anything so you have to rearrange your killbox for greater lethality. And if you did do more damage, you get more money so you can make the room even nastier. At specific total damage values you get new toys, split into explosive, gun, spike, and miscellaneous categories. Certain unlocks make a huge difference like launch pads that keep your dummy moving past traps, portals that can warp him around the room, and sawblades you can make sick little conveyor belts with. You’ll also have four side objectives to complete at any given time, like stick ten crossbow bolts in the dummy or have him frozen and on fire at once. Completing these earns you upgrade points that give your tools important new abilities, such as allowing them to attach to ceilings or reach further or do more damage.

Each test ends when the dummy stops moving and stops taking damage, and most of your equipment is stationary so a major goal is working out a system to keep him going as long as possible. Nearly everything has ammo (actually more like durability) including spikes and sawblades so you can’t keep him going forever. This sounds like a weird limitation but it works in practice because it focuses strategy on bouncing the dummy between all of your traps, not just cornering him with a tiny killbox. It also gives rise to entertaining tools like the big rockets he can get stuck on and the superlasers that smash him into the opposite wall. 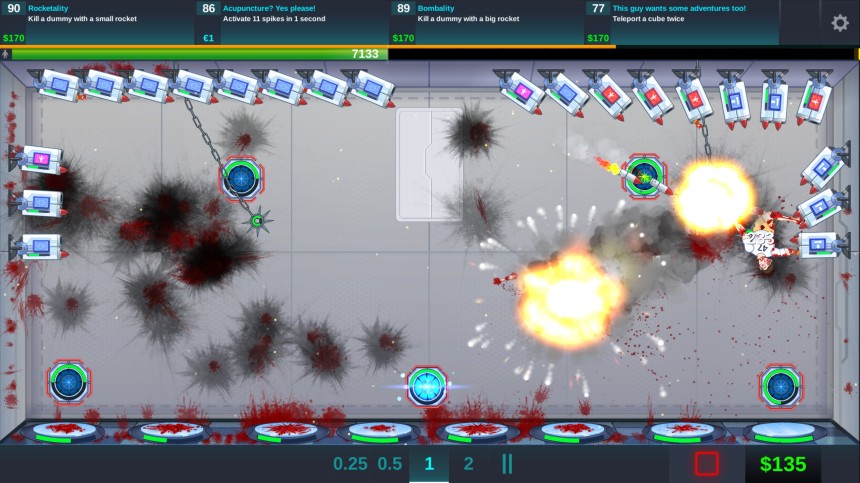 Your dummy suffers visual effects for whatever he suffers, whether it be fire or acid or being nibbled to death by piranhas, so prepare for some gruesome scenes as you get better at abusing him. A handy status screen shows you how much damage he’s taken to each of his ragdolly parts, helpful for determining where you need to focus your efforts. The final break point for damage actually kills the dummy, which awards you an -ALITY for whatever struck the killing blow. There are achievements for each of these to keep you invested after unlocking everything and perfecting your murder machines. You’ll be spending plenty of time just getting to that point and chasing the many side objectives, so don’t expect to be done with the game anytime soon if you like messing dudes up.

There are only a few weak points worth mentioning, all pretty minor. For one, the rough English on some objectives and upgrades can add some guesswork to what you’re doing. Also this can go either way but tests never run the same way twice, even if you don’t change a thing between them. This might frustrate meticulous or impatient types but I kinda liked running a single room multiple times to see how good it could get or if it ever freaked out. Overall Happy Room proved to be more engrossing than I ever thought it would be. It’s the kind of game where I’ll play for 30 minutes, then go back to work and suddenly realize I should have hooked up the tesla nodes to the piranha tanks, and then excitedly tell my coworker what I figured out and end up in a meeting with HR that afternoon. Totally worth it, because sometimes you just want some dumb fun and Happy Room is that, plus a little extra.