I’m not a big fan of traditional fantasy but I do love games that do it well. The King’s Bounty series has their own spin on high fantasy, a cheerful, tongue-in-cheek take that I appreciate for its charm and its surprises. Underneath that appeal is a solid strategy game with plenty to see and do, too, which makes it a winning combination in my book. Despite a few rough edges for being the first in the series, The Legend is a fantastic place to start some fanciful adventures.

As a newly-minted commander under the king, you’re tasked to venture forth and aid the people of the kingdom as best you can. Folks have all sorts of troubles, from carnivorous plants sprouting in their gardens to necromancers taking over their towers to thieves stealing their eggs (tends to be more of a griffin problem, that one). It’s up to you to recruit an army and sort out their issues, usually through warfare but occasionally with cunning or diplomacy. As you travel the lands of high fantasy you’ll start to see a great evil taking shape behind all these distractions, and your quest will lead you through fantastic worlds of crystal and fire before reaching its conclusion. 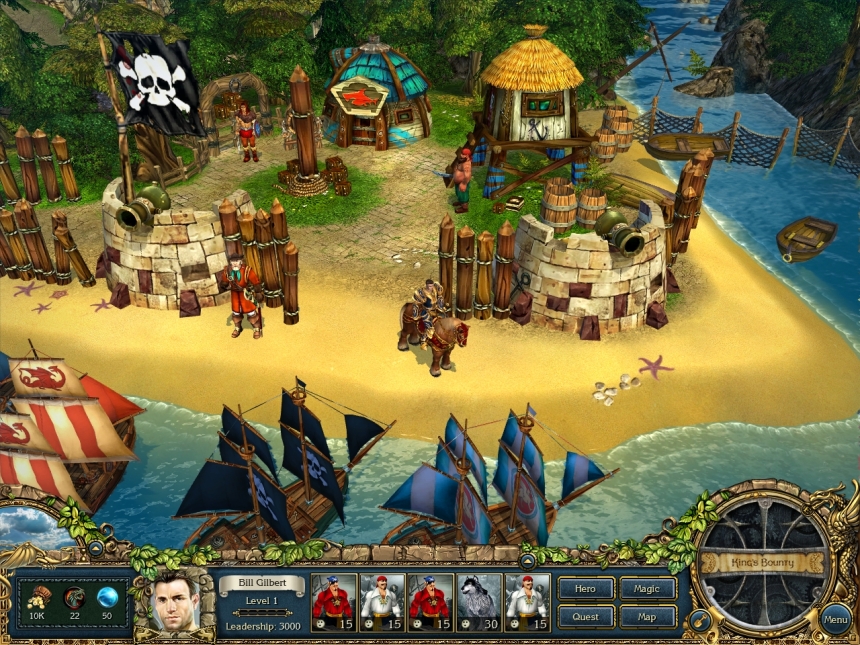 It’s a hell of a journey, and you’ll have a hell of a lot to do along the way. Your main concern is fielding an army for the turn-based strategic battles that comprise most of the game. Troops can be just about anything you can encounter, from villagers and knights to dragonflies and wolves to ghosts and zombies to pirates and bandits to dragons and griffins. You’ll hire them with gold or occassionally earn them through quests, and their ranks are limited by your Leadership score which increases through leveling and exploration.

Once in battle you take turns moving your stacks around the hex grid to battle enemies. You command up to five units representing dozens or hundreds (or just one) of those creatures, and their number multiplies their strength in attacking. There are a lot of tactical considerations in battle beyond just movement and spacing, including abilities, weaknesses to unit types, and terrain features. You and your opponent also have access to spells that can damage, buff, or cripple units, and you also get a special set of powers based on a box of spirits you find. Everything I just mentioned can also be leveled up and affected by your own character level and abilities, as well.

If this sounds complicated, it really isn’t. King’s Bounty does an amazing job of easing you into the game via a very effective (and short!) tutorial, and rations out additional systems over the first hour or two of the game proper. A lot of it is pretty clear on its own, such as gearing your character and unlocking skills in his skill tree, thanks to a very intuitive interface that fits a lot of information into easily-readable windows. And while there’s plenty of strategy to battle it doesn’t come with a ton of buttons or commands, just ways in which the systems interact. It’s a clean and intelligent design from top to bottom which makes the game a pleasure to work through.

The story picks up the charm and runs with it, going with a tone that’s just self-aware enough to ellicit a few chuckles but never enough to pull you out of the game entirely. Chatting with characters is always fun for their unique voices and takes on the fantastic world, though be prepared for a little awkwardness that seems to stem from translation. It does a lot with traditional fantasy tropes that keeps the journey fresh, and there’s a wealth of side quests that are both fun and include some unexpected surprises. 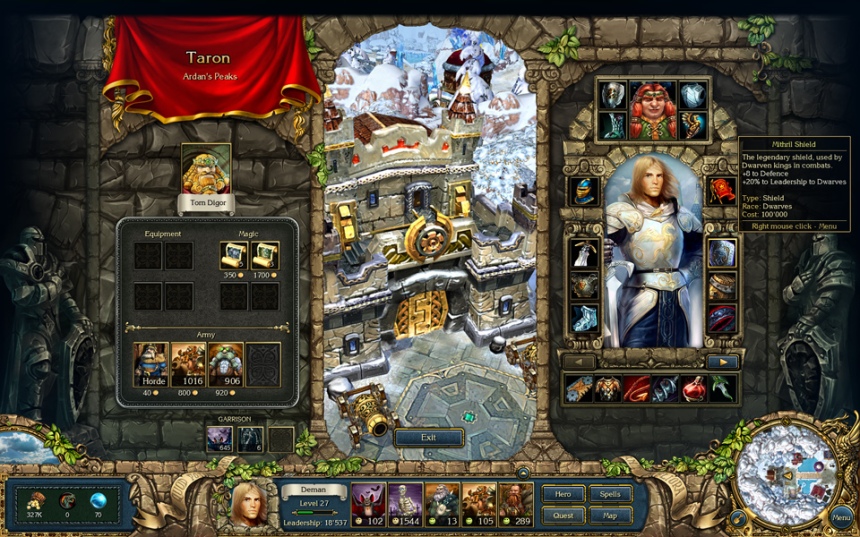 King’s Bounty is a fantastic fantasy adventure but does suffer a bit from being the first entry in its series. My big gripe with the game was trying to keep armies together, as casualties suffered in battle are only addressed easily by going back and recruiting more of the unit you had. This can be a real pain if you’re relying on a specific strategy. In my case, I married (yes you can do this) a pirate captain who gave me huge bonuses to pirate units, and so I rolled with a privateer posse for most of the game. Every time I lost a bunch of buccaneers, though, I had to go all they way back to the islands to get more. Eventually I literally depopulated the world of pirates, and had to move on to other units which left my pirate wife mostly useless. You’ll get more mileage out of planning for a dynamic army, but keeping it staffed is always going to be an issue.

That’s really all I have to say against it, though. My adventure took over 20 hours and I still didn’t see everything there was to see, and outside a few out-of-depth fights it was an absolute joy to experience. The bright, colorful graphics echo the cheery tone of the game and the sound design matches it just as well. There are three characters and four difficulties to choose at the start, and beating the game unlocks a mess more characters if you want to stick with it forever. And that’s not such a bad idea, because there’s a lot of charm to experience in this fanciful title.