I love exploring in games and turning up hidden treasures. They don’t even have to be actual treasures, just interesting little bits of scenery or lore to take in. For people like me, Hyper Light Drifter is just about everything we could ask for, untold secrets densely packed across a vibrant alien world. Coupled with a story that hinges on those very secrets, and combat that comes in intense bursts between journeys, this has easily become one of my favorite games to explore.

I’m not even going to make an attempt at Hyper Light Drifter’s story because divining it for yourself is part of the game’s appeal. It opens with a blast of intense images full of destruction and foreboding, and then sets you into the world at a forlorn campsite in the middle of… somewhere. Your ultimate goal is to activate four devices at the cardinal corners of the world, for reasons that will become apparent in due time. The story that goes along with this grand journey is told in the places you find, the scenes you witness, and the textless interactions you have with the strange inhabitants of this colorful world.

And boy howdy, colorful it is. I can only assume that’s what drew your attention to HLD in the first place, because screenshots of it are plenty intense on their own. Everything in the game is rendered in chunky pixels of incredible color saturation, finding you in purple and fuchsia dungeons, perfect cerulean lakes, or sea green forests of crystal. The landscapes are just as detailed as they are hued, with little telling cracks in stone or hints of recent disturbances in ancient tombs. This combination of color and detail can make the lay of the land hard to understand at first, but an hour or so with the game’s many cliffs and traps will get you adjusted to the delightfully garish art.

Once you get accustomed to traversing the alien landscapes, you’ll have no end of discoveries to make there. Most of your time is going to be spent exploring the world, marveling at the grand and somber ruins of past civilization, and scrounging up loot from within its bones. Nearly every scene in the game has a secret platform or passage tucked away that leads to money for upgrades or keys for unlocking doors or stranger things still. There are small tells that can hint at secrets but to get the most out of the game you’ll need to sniff them out yourself, pressing on every wall and attempting daring dashes across bottomless expanses. The exploration is incredibly rewarding, not just in how much there is to find but how secrets themselves reveal bits of environmental storytelling, like skeletons gathered around a still-burning campfire. 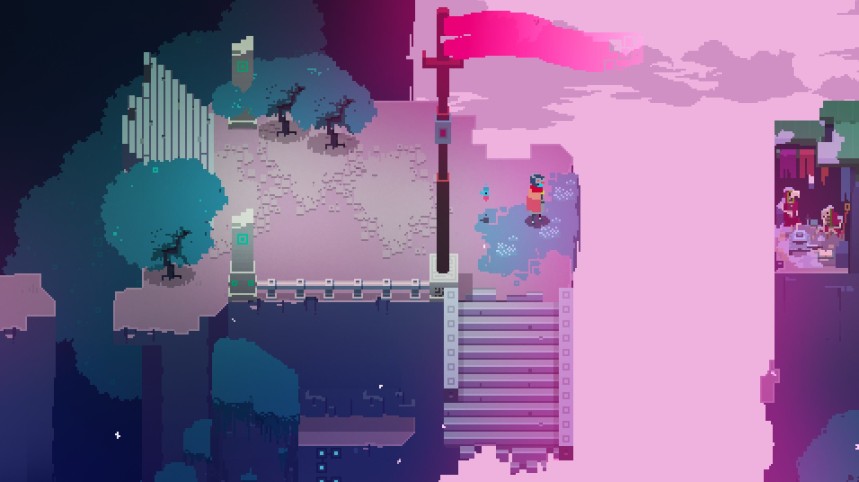 The other part of the game is combat, and I hope you’re ready for a drastic departure from everything I’ve just described so far. As beautiful and relaxing as wandering the world is, battling its less-neighborly denizens is an intense, lightning-fast exercise. Enemies tend to have quick, far-reaching attacks with conspicuous telegraphing, requiring you to use your near-instant dash to dodge and re-position for the sword hits to dispatch them. You’ll catch on pretty quick in the early fights with simple lunging enemies, but before long you’ll be facing hulking monstrosities with ground-shaking strikes, alien swordsmen that slash just as fast as you, and hordes of those same simple enemies you thought were no trouble before. Surviving battles means finding openings, managing the health and positions of all your foes, and dashing like a Tracer main on angel dust. Especially after unlocking the chain dash that lets you blink all over the map.

You’ll have plenty of tools to help you survive and succeed, including guns, bombs, sword upgrades, and new dash abilities. All of these can be purchased using the credits you find so diligent exploration is key to combat, as well. You carry a supply of medkits that can restore your paltry five blocks of health but it’s more to cover for single mistakes, rather than tanking hits through an extended fight. The bosses will definitely put you to the test, having enormous health bars and attacks that can hit multiple times from multiple angles. Late game fights have an element of bullet hell to them as well, which will challenge your reflexes to either dodge or reflect with your sword.

Reaching the end of this grand journey will take you 5 to 6 hours, and every minute of that will be spent in the depths and expanses of a fully realized alien world. The designers behind Hyper Light Drifter know how to craft amazing vistas and startling scenery, because you’ll be coming across it constantly. And the adventure doesn’t end when the credits roll, because I guarantee there will still be loads of secrets to turn up, including hidden upgrades and bosses. Along with full New Game + and Boss Rush modes, you can spend well over a dozen hours here without seeing everything. And with so much wonder and mystery around every corner, there’s absolutely no reason not to.