I hope it won’t come as a surprise to anyone that I was an English major, and I work as an editor now. I’ve learned a lot about the power and uses of words over the years spent in books and text files, and that necessitated learning a lot of words, too. So I’m in a unique position to appreciate Letter Quest, the game I’ve been inadvertently preparing myself for my whole life. And I do appreciate it quite a bit for its polished presentation and its wealth of content, but mainly for the surprising challenge it offers.

The quest part of Letter Quest centers on Grimm, a plucky little reaper with his heart set on some pizza. A bevy of fanciful monsters is set against him reaching his goal, however, and so there’s reaping to be done if a pie is in his future. That reaping is done by spelling words, of course, picking tiles from sets of 15 to form the longest words you can think of. Longer words do more damage and earn you more rewards, both of which are key for progressing though the game. 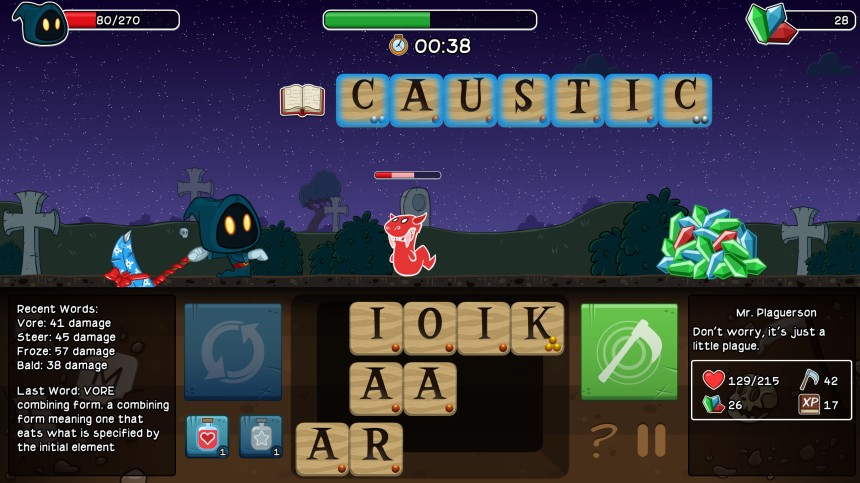 There’s way more strategy here than just spelling SAT words, though. You’ll mainly want to shoot for longer words because you’re trading blows with enemies and need to clear the stage before they whittle you down. But sometimes it’s better to save a long word for the next foe and finish off the current one with little terms. Enemies also have skills that can affect your letters, like poisons that do damage if you use that tile, whirlwinds that change letters every turn, and diseases that spread and make letters do no damage. It’s not all bad, though, because sometimes crystal tiles appear that provide boons if you use them, so the better play can often be making a shorter word that uses the crystal to gain its effects.

These are just the tactical considerations during battle, mind you. Clearing stages and defeating monsters earn you gems that can be spent on equipment, potions, and an impressive spread of other items. You have books that provide focused bonuses when equipped, upgrades to your key stats and random effects like crystals appearing, unlockable weapons with different behaviors, and so on. There are consumables and cosmetic effects offered as well, so racking up gems isn’t a purely functional endeavor either. 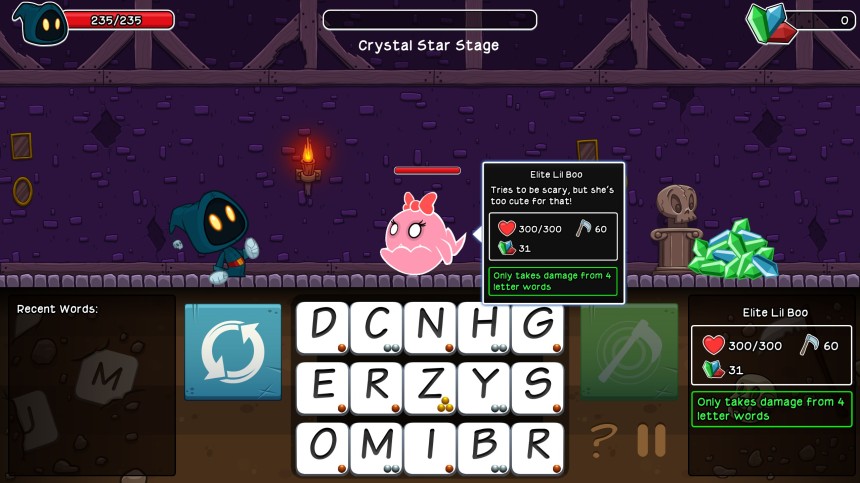 Spending your gems wisely is important to progress through the levels because the difficulty curve isn’t a straight shot. Just doing the basic levels in order will get you outclassed within an hour or two, with enemies easily outdamaging you. You can be a spelling savant but because you’re always trading blows with enemies, the true key to survival is having your stats in the right place. This might sound like a pain and honestly it can be a bit frustrating to be right on the edge of where your stats can get you, losing levels by just one or two turns.

The saving grace, though, is that each level has multiple challenge modes to attempt and score extra gems. Half of these are time attacks that tax your brain with spelling complex words on the clock, and the others are special gimmicks like limited words or 4-letter-only challenges to keep things fresh. Add to that some side paths through the world map into harder levels and you’ll have plenty to keep you busy across the game’s 40 stages. Oh, and there’s even an endless mode if you tire of questing for letters and just want to spell some monsters to death. 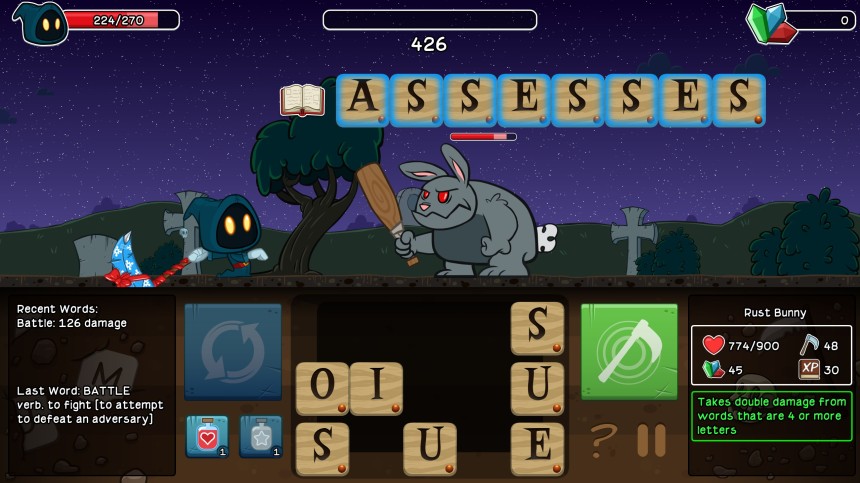 It’s a polished package, with nice clean vector art and a charming soundtrack to accompany your word assaults. Between the menus and the gem-based progression gating it does still resemble its mobile roots, however, so it’s bound to feel cheaper than other offerings. For a game like this it’s hardly the kiss of death, given how much depth and challenge there is to the gameplay. Letter Quest does a lot to build on the basic word-based combat, more than enough to keep anyone spelling their way through its dungeons.