As I sit here writing this it’s been a few days since I finished Ori and the Blind Forest, and I still get a little misty thinking about the ending. Or the beginning, or the middle, or really any part of the story. The developers found that magical mix of art, animation, and sound design that can tear at your heartstrings, which is a rare and admirable feat. They also wrapped it in a game that’s vibrant, expansive, and had me tearing my hair out in a few places.

The forest of Nibel was a lovely place full of spirits and peaceful beings until one stormy night that changed everything. Little Ori, a child of the great tree spirit, gets whisked away on a journey to restore the light that sustains the forest. Doing that will take you to every glade and vale and beyond, to tropical lagoons, musty caves, ancient ruins, and more. Ori has plenty of acrobatic skills to learn but leaves the fighting to his little sprite friend who fries foes with bursts of light.

Before I get into the game mechanics or plot or anything else, just look at this thing. Screenshots don’t really do it justice, you need to see it in motion to understand the level of creative mastery that went into crafting the look and feel of Ori’s world. Every bush and thorn and tuft of moss wavers in the breeze and sways when Ori passes. The forest stretches on far past the 2D plane the action is locked to, with incredible details just beyond. The effects of magic or skills are brilliant and full, carrying with them gratifying weight to everything you see and do. This is easily one of the most beautiful games I have ever played, and transcends the medium to be a remarkable artistic accomplishment on its own.

The sound design is built to match, featuring a soulful orchestral soundtrack complete with vocal accompaniment. Every enemy you dispatch or item you nab emits a rich, pleasing sound, and this attention to detail extends all the way down to Ori’s pitter-patter against the soil or sand or stone, each with its own sound. Simply being in this world and experiencing it so vividly is an exquisite joy, making everything you do that much more engaging and affecting. 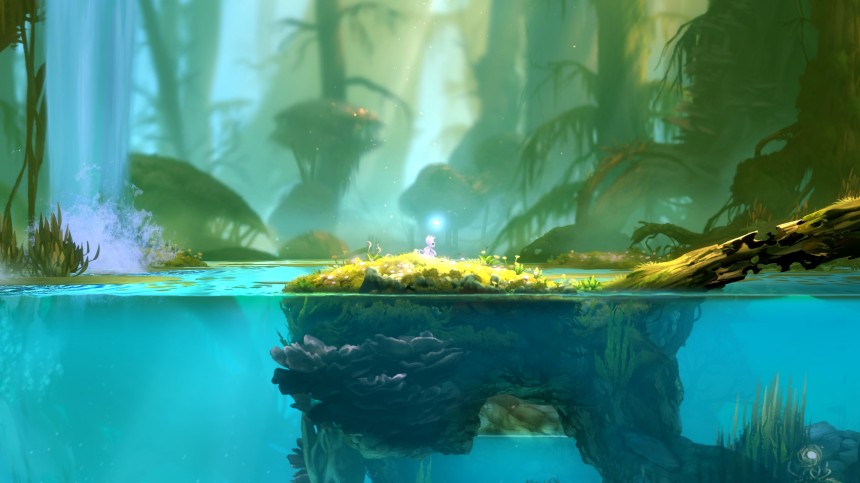 It’s a magnificent framework for any game, but as a metroidvania Ori makes excellent use of it. The forest of Nibel and its environs feel incredibly vast, with everything from narrow burrows to yawning valleys awaiting you. There are twisting paths and crossroads to be found everywhere, and secrets abound in high places or behind mysterious barriers or tucked away in the lush scenery. You’ll have hours of exploring ahead of you, searching high and low through environments that never lose their luster.

Progressing through Ori’s story is a simple matter of following your companion’s directions to your next objective, a common system in modern metroidvanias. The map is vast enough to cause confusion without some clear direction so I’d consider it necessary, and there’s plenty of side paths to poke around along the way. You’ll be directed to all of the powers and upgrades you’ll need to progress, though at least one ability appears to be an entirely optional reward for exploring a distant region. There’s an experience system that earns you points for a skill tree of conveniences, some of which are powerful abilities like triple jumps and air dashes that allow you to circumvent some of the more difficult platforming challenges.

While abilities unlocked through the skill tree aren’t necessary to beat the game, you may be hard-pressed to succeed without them. Honestly, you may be hard-pressed to succeed at all. For all the Disney/Pixar/Ghibli warm fuzzies the presentation conjures for you, the gameplay is going to punch you in the dick. I was pretty surprised when I started dying in single hits to tricky jumps or common-looking monsters, and the further I got in the game the more death was sure to come in new areas. Ori is surprisingly unforgiving of mistakes, in large part because of the inconsistent health system. You might have ten full pips of health but there’s no way to know if bumping some thorns or getting charged by a critter is going to knock off two pips, five pips, or just kill you outright. And I’ve had all three of those happen in the same area.

The unique save system that allows you to conjure a save point in any safe location can help mitigate the frustration, but only once you get used to using it constantly. And it won’t mitigate the difficulty because some sequences of jumps have to be executed perfectly to avoid instant death. There’s a really clever power that lets you jump off of projectiles and quite a few dangerous segments call for its use, but it’s dependent on projectiles being in the right place at the right time so you can unknowingly doom yourself by simply being too far ahead or behind in progression. Nowhere is this more apparent than in the escape sequences that take the place of boss battles. In these you have a long string of jumps and maneuvers to execute perfectly, and missing even once can force a restart. And there’s no point in trying to speed through them because the threat always rubber-bands up to where you are.

I was incredibly put off by the unexpected difficulty spikes shot through this title, and if not for the exceptional quality of the other elements I would have quit at some point. But my God, I think this game could have literally punched me in the dick and I would have stuck with it to see more of that art. The look and feel of Ori is second to none and easily absolves the game of any shortcomings it suffers, which for all my protests are not that glaring to begin with. This is a game that knows how to touch your heart in powerful ways, and it’s absolutely worth experiencing even before you consider the overall high quality of the gameplay itself.