As a great man once said, I love it when a plan comes together. Games that let you craft a cunning stratagem and then execute it to bamboozle your foes are among my favorites, whether they be turn-based strategy like Invisible Inc. or FPSes like Deus Ex. The platformer genre has a few of these, including Mark of the Ninja and Gunpoint, and now it has Ronin as well. Plans in Ronin end with you standing triumphant over an office building of dead guards and soldiers, filling you with an incredible sense of accomplishment. It’s just that it might come at the end of twenty minutes of intense frustration, too.

You have been wronged by five very powerful people, and you’re not going to let them get away with it. Armed with a katana, a grappling hook, handy gadgets, and seemingly impervious leg bones, you’re tasked with skulking through office complexes to track down and murder these villains. There’s an impressive number of guards between you and your goal, though, and if you do the job right no one will be left standing in the end.

I mentioned Gunpoint, and you’re looking at screenshots and thinking “This is Gunpoint”, and I need you to stop doing that right now. Ronin certainly looks a lot like Gunpoint, right down to the mouse-directed leaps and wall-crawls, but I assure you that’s where the similarities end. Gunpoint was a game of stealth that leaned far harder on puzzle elements than action. Stealth in Ronin is only of limited use until you start killing people, at which point the game turns into a bloody, kinetic game of chess.

Combat is turn-based in a terribly clever way. The game pauses and allows you to set about one second of action, whether that be making a quick leap, clearing half of a longer leap, swording someone to death, or using your keen motorcycle ninja skills. Once you take your action the enemies take theirs, usually shooting along lines painted for you during your turn. Survival requires you to weave through these deadly corridors, dodging bullets while executing your attackers one by one with careful, planned strikes. 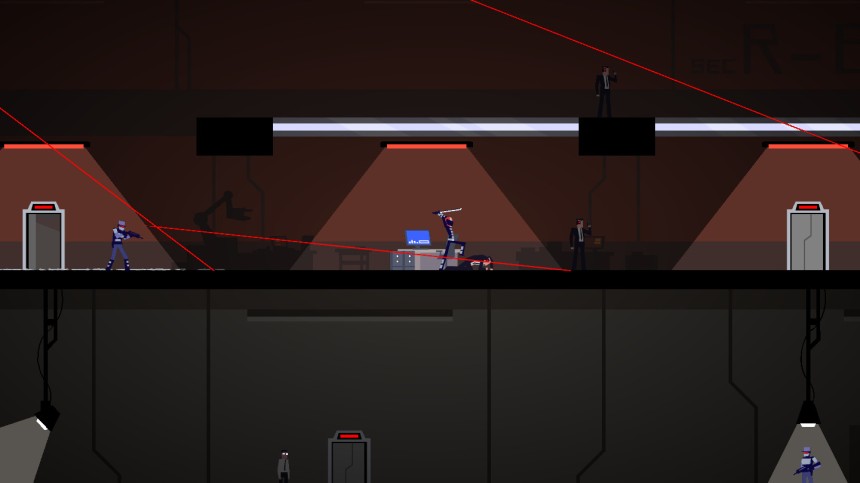 When it works, Ronin is an amazing ballet of Hotline Miami-style murder that you control at the leisure of well-planned turns. The problem is that it doesn’t always work, and there’s a few reasons for this. The first and most immediately apparent is that the controls are absolutely terrible. You wouldn’t think a 2D turn-based platformer could foul up something like basic movement, but the controls are stiff and awkward out of combat, and incredibly restricted during fights. You’re limited to jumping and swinging only in turn-based mode, meaning that you can get stuck hanging on ledges because the game won’t let you simply mantle up or shot in the face by a guy just a sword length away because the game won’t let you take a single step. You also need the mouse to click on action icons, but I’ve found at 1440p they don’t display in the right places so every time I want to sword someone or take an elevator I have to play hide-and-seek with invisible buttons.

The other reason combat falls apart is that sometimes the game just lies to you. Very quickly you’ll start entering shootouts with six, eight, or more gun-wielding guards who will work their pixellated asses off to trap you in a web of bullets. Escaping long enough to kill them often requires jumps that end in precise spots in midair, positioning you for diving stabs. The jump interface helpfully colors your destination red instead of white if it’ll take two turns to land, with the transition between red and white being where you’ll end up after the first turn. But sometimes you don’t end up there. Sometimes you’ll land right in the path of a bullet, or not even jump at all if something else is near you. This aggravation can extend to your skills as well, with clutch sword tosses or stun darts blocked even though the path is displayed as clear. 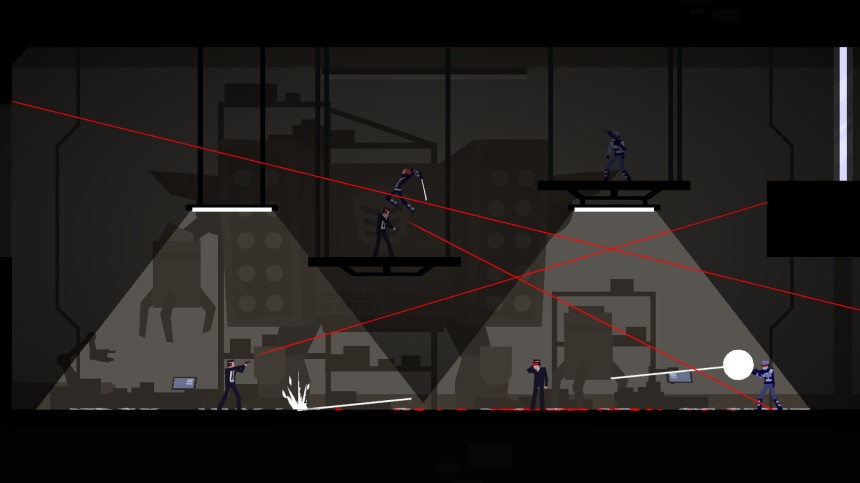 Ronin is inevitably going to frustrate you, and the real question is whether or not you’re going to be willing to forgive it and keep going. Even if nothing glitches out and everything functions perfectly, there are some fights in the late game that will take you dozens of attempts to power through. And there’s nothing worse than spending ten minutes executing an entire room of guards only to misjudge a jump right and the end and have to redo the whole thing. Fights never go the same way in subsequent attempts, either, so there’s even a luck factor dipping into your enjoyment.

For those of you who can stick it out, there are plenty of stages to murder your way through, complete with challenges that earn you skill points to spend between levels. This is the only progression to speak of and there are no secrets to turn up, mind you. Ronin looks great and sounds great, but that’s just icing on a cake that you might not want to eat at all. I can’t get around how frustrating this game can be sometimes, but I also can’t stop myself from knocking out a few missions every night. It works well enough that I haven’t given up on it yet, and when a plan comes together it really is an incredible feeling. You’ll need a fair share of patience and understanding to get through this one, but in the end I’d say it’s worth it.