I’m going to give Ballpoint Universe some props just for existing, because it’s one of the weirdest games I’ve made it all the way through. Set in an impressive hand-drawn world, this title toes the line between side-scrolling shooter and platform adventure in a way I’ve never seen before. It doesn’t always work, and it’s hamstrung by some unfortunate technical and design issues, but the effort here to bring something new to the table deserves more than a little recognition. 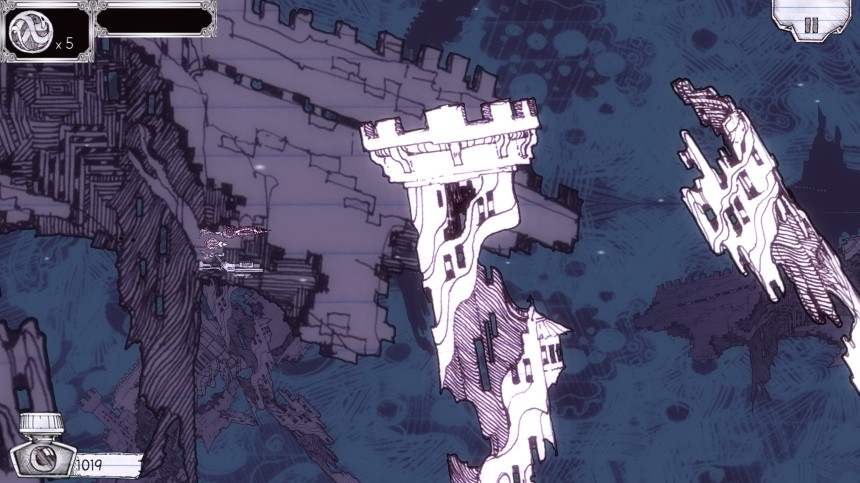 Ballpoint Universe is just that, an entire reality spun out of the tip of a pen. You play a simple doodle, some small spastic kiwi-looking thing, as he tools around talking to cigar-smoking boots, hovering turnips, sentient geometry problems, and other idle sketches brought to life. Scooting and hopping around the world finds you new beings to converse with, missions to undertake, and golden sketches to collect. While there’s plenty to do and collect, all you really need to do to see the story through is keep on trucking through the strange landscapes of the world.

This is the platforming segment of the game, and while it’s functional I wouldn’t put much stock in it. There are no enemies or puzzles so it plays more like an adventure game than anything, doubly so because everything is mouse-driven. The controls are kind of a huge deal and should probably be the first thing you know about the game, but I’m too married to my review format to put them before now: The only controls are the mouse. Gamepad and even keyboard are not an option, you move your kiwi-thing by putting the mouse to the left or right of him to make him move, or by clicking to jump. And as I indicated before this is functional because the game isn’t much of a platformer, except for near the end where there are moving platforms over bottomless pits to make precision jumps between. Then it becomes intense, grating frustration.

The missions I mentioned earlier have nothing to do with the platforming. Instead, they launch you into side-scrolling shooter segments with your customizable ship against waves of sketchy foes. This is the real meat of the game, where you earn ink to buy and upgrade parts for your ship and struggle to get gold rankings for yet more ink and golden sketches. While the content of each shooter segment is standard fare, the many ways you can configure your R-Type force-looking vessel help keep things fresh. You can have two weapons from a selection of guns, blades, and shields, along with a chargeable superweapon that can attack or defend or summon help, and top it off with a hull that provides additional powers like afterburners.

Starting from the basic ship I eventually built a dual-bladed beam cannon boat that could annihilate anything at close range. It’s an interesting and at times gratifing system, but overall it’s dragged down by some poor design and some terribly glaring bugs. Your ship is also controlled by mouse alone, meaning precision is going to be tough to manage without some serious practice. Melee weapons are automatic by proximity but sometimes don’t go off when you really need them to. And if you wrestle your way through these issues, some enemies glitch out and vanish from the screen and in one extreme case, a level was rendered unwinnable because enemies would no longer spawn into it. 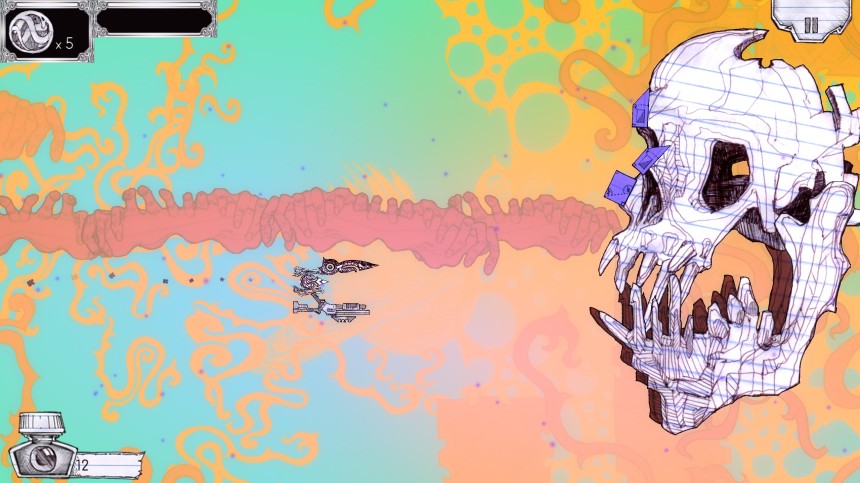 Honestly there are enough issues to warn people away from Ballpoint Universe, but I’m going to recommend it anyway. The problems are severe, don’t get me wrong; one optional mission is basically impossible to complete on my end because the later waves never spawn. But you can still see it through to the end in an hour or two and it’s a sight worth seeing. Unique genre mashups like Ballpoint Universe are not all that common, and it’s even less common for them to be fun. Despite the failings there’s still a solid core at the center of this title, and with some patience you can and should experience it for yourself.