Review: A Boy and His Blob

I tried with this one, I really did. The original on the NES was always fascinating to me, with its bizarre mix of open levels, tricky partner mechanics, and inexplicable economy of jellybeans. I only got halfway through it the one time I rented it but the experience has stuck with me for decades. The remake, in stark contrast, is having trouble staying fresh in my mind for more than a week. And when I do manage to remember what I was doing, it isn’t with any sort of fondness. 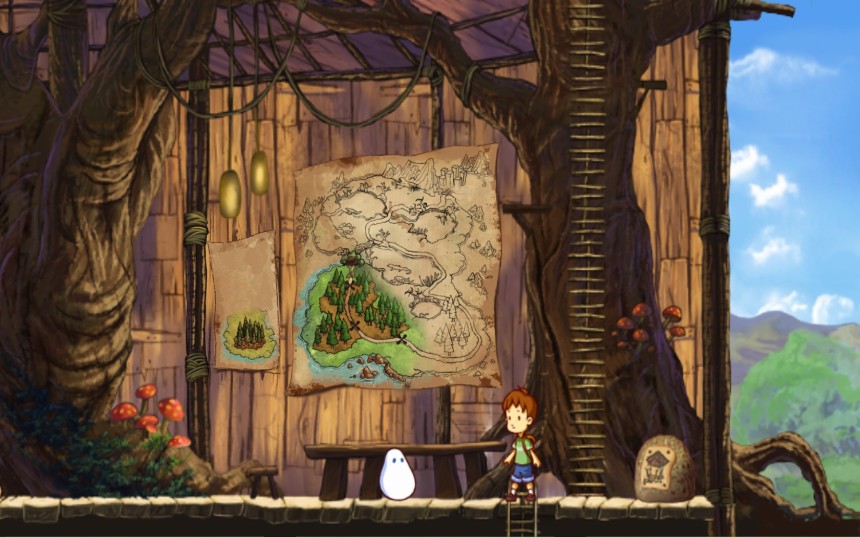 A young boy goes investigating a meteor impact in the woods at night, as any possible forest-dwelling orphan might, and ends up making a new best friend. The blob tags along with him wherever he goes like an elastic puppy, accepting hugs and summons and harboring a hunger for jellybeans. Feeding the alien a jellybean will cause him to shapeshift into something useful, like a ladder or parachute or hole in the ground somehow, all depending on the flavor of bean. Together they embark on a quest to do something I didn’t get to see for reasons I will explain shortly.

In the original ABaHB, you and the blob used his elasticky powers to search for loot in the vast caverns beneath maybe New York, use the cash to by vitamins, and then blast off for a candy planet to save blob’s friends from a saccharine tyrant averse to pills. It was insane and impossible and like nothing else on the system, which is what earned it its cult following. In this ABaHB, you use the blob and a limited assortment of jellybeans to puzzle through short levels. There are collectibles to score in each level but the main goal is to reach the end, as with virtually every other puzzle platformer in existence.

Look, I appreciate WayForward’s effort to bring ABaHB into the modern era, and in a limited sense they succeeded. The controls are solid and familiar to most players, as opposed to the touchy and slippery ones of the original. The graphics are charming as hell and incredibly well-animated. And the levels present simple challenges to overcome with the tools provided. The problem is that none of the things that made the original worthwhile have survived the revival process. Gone are the open maps, the diverse challenges, the unique threats, the odd jellybean strategies, and the 80s fever-dream atmosphere. The formula has been boiled down to the faintest resemblance, draped over a game you’ve seen a hundred times before in the indie platformer scene.

And then, once you dig into what’s left, you find even that lacking. Despite the quality of the graphics and animation, nothing that happens in the world has any impact. All of your movements are floaty and disconnected and enemies don’t even bother to attack, they just touch you and you crumple. Outside of the obvious tutorial applications it can be hard to tell where and how you can use powers like holes and ladders, and the trampoline is a deathtrap with the harsh falling damage to be found here (though this was certainly true in the original, as well). There are collectibles to find but they’re generic chests you don’t even get to open, they just make doodads appear in your treehouse and unlock short, boring challenge levels if you find enough. 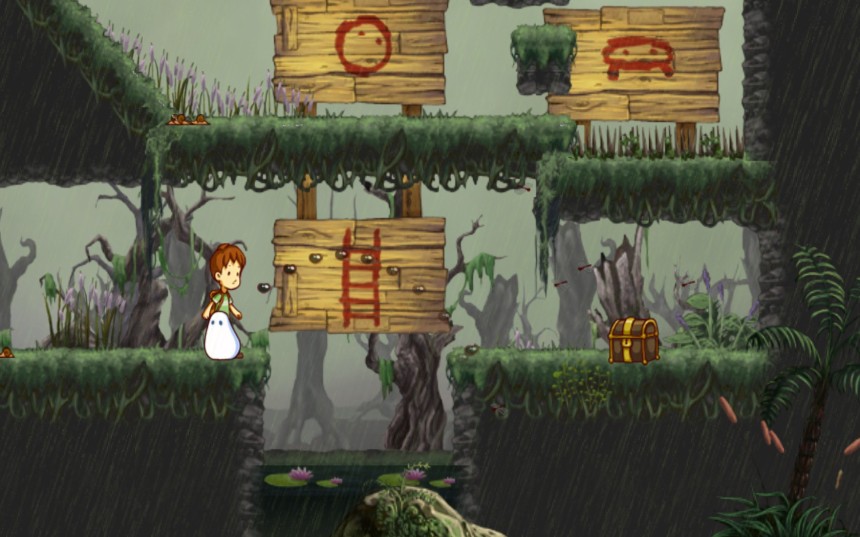 I really did want to work my way through this title to see the full spread of what it had to offer, but I reached a point near the end of the first world where the puzzles stopped being any fun at all. It was in a dreary swamp, there was a big charging enemy I had to finagle my way around, and flubbing any part of the process made me do the whole thing over. I kept trying and getting frustrated and losing interest, and I felt bad because surely I was just missing something. But then I checked the achievements and less than 10% of players had gotten past where I was stuck. And this is the first world! Maybe there are closer ties to the original deeper into the game, but I’ll never see them. Honestly, I wouldn’t suggest you go hunting for them either.