If you give me a mech in a game, I expect two things. I expect lots of buildings and tanks and people to tower over, and I expect to stomp them with reckless abandon. Brigador understands this, appreciates this, and serves it up with exactly one caveat: It will not be reckless. You will annihilate columns of tanks, regiments of infantry, and entire city blocks, but only if you are careful and smart about it. In other words, they took the concept of mechs and made what could be the best possible game with them.

Brigador opens with harsh neon, heavy synth, and the words GREAT LEADER IS DEAD – SOLO NOBRE MUST FALL. Indeed, the brutal dictator of a remote colony world is no more, and a certain megacorp is paying big bucks to make sure no one fills the vacuum he left. That’s where you come in, taking on lucrative contracts to destroy the city’s defenses and infrastructure, wipe out the factions vying for control, and crush every last vestige of Great Leader’s reign. It’s a big job, and luckily you have a mind-boggling assortment of mechs, tanks, hoverships, and giant-ass guns to get it done. 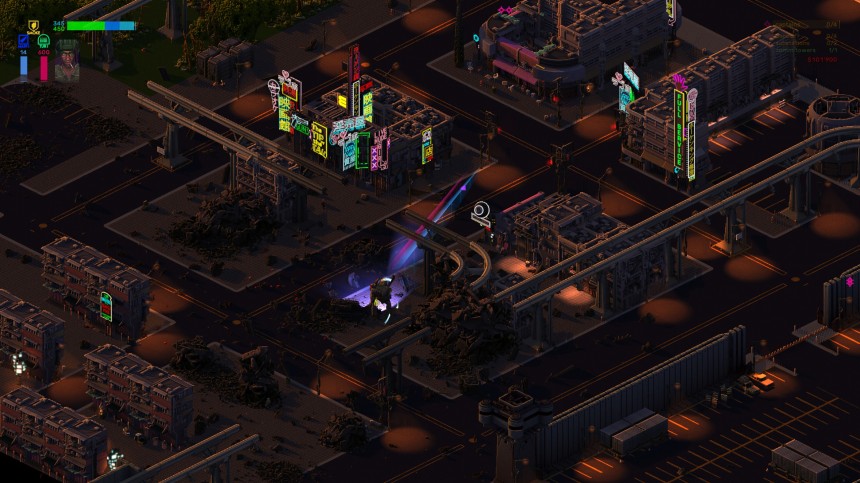 If this setup sounds dystopian as fuck to you, you’re in the right place. Solo Nobre is the quintessential cyberpunk hellhole and it makes all the difference in the world to the feel of the game. The maps you’ll be stomping across are cluttered industrial parks, blocks of neon bars and dives, posh walled communities, muddy slums of lean-tos and row houses, necropolises of towering stone mausoleums and unmarked graves, and bustling, shining spaceports. Every road and building and tree is rendered in incredible, pixel-perfect detail just like they used to do in those halcyon days of SVGA 2D games.

All of this is here for you to level the absolute shit out of. Every mission is a contract between you and the Solo Nobre Concern (complete with delicious legalese flavor text) to take out important targets such as orbital guns, enemy captains, or statues of Great Dead Leader. You’ll start in one corner of the map in your chosen vehicle, and you’ll have to make your way through the dense cityscape and dozens of enemy units to take it out. Literally everything is destructible, from the tallest buildings to the tiniest bench. 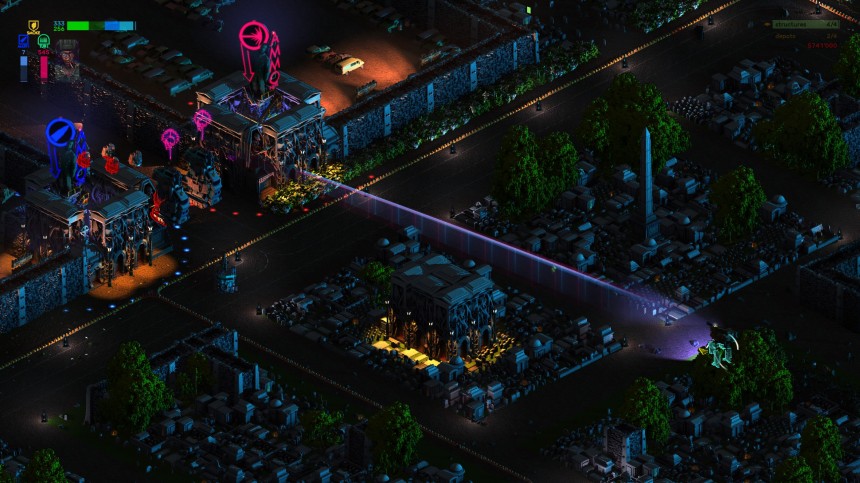 It’s the perfect setup for mayhem but like I mentioned, you have to be smart about it. Brigador is not the arcadey playground it may appear, because stomping around and blasting mindlessly will get you killed very, very fast. Depending on your chosen mech you may or may not be the toughest thing on the field, but you’ll always be outnumbered. Fortunately, Brigador has some of the most well-designed enemy behavior ever seen in a game like this. While you enjoy an isometric birds-eye view, your enemies all rely on lines of sight, audio cues, and a little bit of patrolling logic. Charging into battle head-on will get you blown away but you can actually sneak behind high walls, crouch behind trees and containers, distract enemies with remote explosions, lose them in twisting streets, and even trick them into blowing each other up.

You have plenty of tools to accomplish all this, but they are limited in use. Your vehicle carries two weapons with limited ammo, a defensive option like smoke shells or optical cloak on a cooldown, and a melee attack like stomping or bull rushing. Every resource must be used to get through missions, to keep enemy groups manageable or to escape a trap or just to not run out of ammo. There are depots around the map to refill the four possible kinds of ammo, and enemies drop pickups as well, but your base pool is usually limited so you need to make every shot count. That can be tricky with the surprisingly technical aiming system that takes into account firing arcs and momentum, but once you get the hang of it every dead-on howitzer shell is going to feel like Christmas. 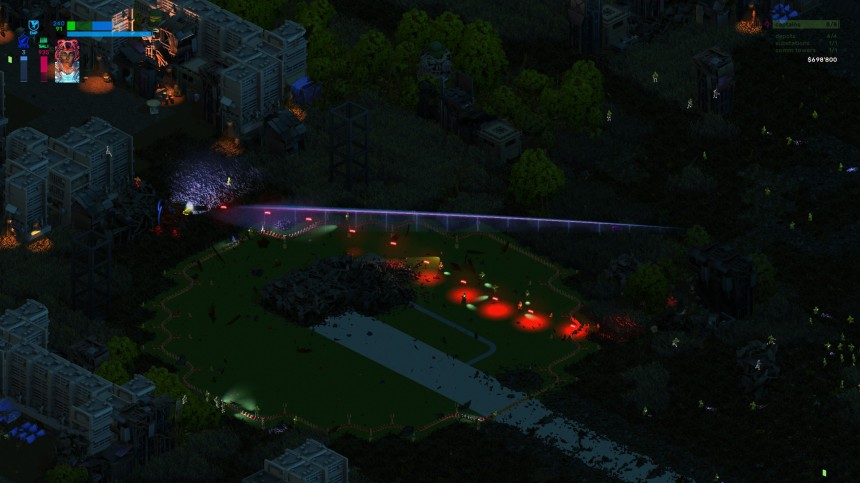 Even trickier is going to be the movement system, and this is likely where the steepest learning curve is. All of your movement with WASD is relative to your vehicle’s facing, not the screen. It’s tank controls not seen since the heady days of Crusader: No Remorse and to be fair, it gives you just as fine control here as it does there. But honestly this control scheme died out for a reason, because it’s just harder to process than screen-relative or absolute controls. The developers wisely understand this and have added options not only for absolute controls but ALSO for slowing down the game itself to give time to process the moves you want to make. Personally I’ve been sticking with the original settings and while I’m still warming up to them, I’ve gotten through a lot of missions with them.

On the subject of gameplay, you’ll be hard-pressed to run out if you dig the mech-mayhem on offer here. There’s a lengthy campaign that starts with some decent tutorials that cover JUST the basics and then spirals off into contracts to wipe out commanders and whole districts of enemies. Each mission offers four pre-set loadouts to use of varying challenge levels, but overall the game gets HARD by the halfway point. Brigador does not hold back in any way; I’ve dealt with a mission where you start with no ammo in a cramped space with one-shot suicide rockets, and a mission where you have to get past an army of huge sentry bots in little more than a motorcycle. They’re viciously difficult and took like 20 tries to beat, but honestly I can’t say I didn’t enjoy every attempt, blowing up and dying in exciting new ways every time. 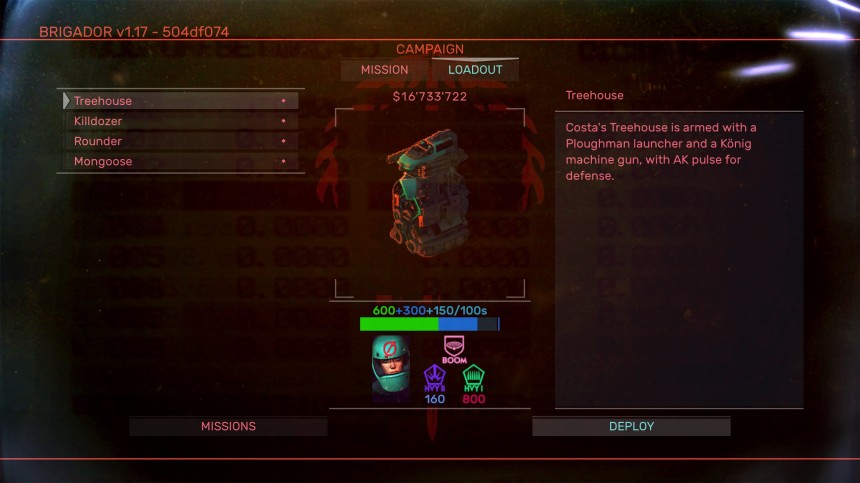 The campaign earns you money to unlock new assets in freelance mode, which is honestly where you should be spending most of your time. Freelance mode puts every single mech, tank, a-grav, gun, defense option, and pilot at your disposal to remix into whatever chaotic monstrosity you want to challenge yourself with. With enough money you can build acid-launching chicken walkers, mortar-slinging party vans, microwave-shooting motorbikes, and towering amalgamations of cars topped with train cannons. These can be sent into multi-map contracts where your ammo and damage carry over between maps, and sometimes you can cash out early if things go south. It’s a thrilling and almost overwhelming mode because of all the choices you have and new combinations to learn, but it will last you literally forever.

All of this is wrapped in one of the slickest, most cohesive packages I have ever seen. Brigador deserves accolades for a lot of things but nothing as much as their absolutely spot-on cyberpunk dystopia. Solo Nobre is fully realized as a functional, logical hell of corporate interests and guerrilla intrigue, fleshed out with well-written snippets of lore and dialogue for every contract, map, vehicle, and faction in the game. The graphics evoke the best parts of dark, powerful technology crashing against human concerns, and the throbbing synth soundtrack is the ultimate icing on the neon cake. Wherever you’re coming from, whether it be Blade Runner or Ghost in the Shell or Shadowrun, you’re going to feel at home, and you aren’t going to want to leave. Brigador is the perfect intersection of mech combat, dystopian themes, and technical gameplay, forming a title that really should be seen as a landmark in the genre.