I have daughters, not sons, but this one still touched me on a personal level. It would be hard for it not to touch anyone because it follows a very human story, a journey of sacrifice and loss. I had some idea what I was getting into when I started it and the finale still got me pretty good, so prepare for a straight shot to the feels when the end comes. You’ll need to prepare for a very unique experience anyway when you start wrestling with the controls, but I assure you the sacrifice is well worth it.

Unsurprisingly, this game is the tale of two sons, out on a quest to save their deathly ill father. Told entirely without intelligible dialog, the story sends them to the furthest reaches of their rather Scandinavian world to retrieve something that can save his life. Along the way they’ll meet all manner of simple folk, some not-so-friendly critters, and some unexpected figures of myth. There’s a lot of ground to cover between their craggy home and their mysterious destination and you’ll guide them almost the entire way, in a grand journey that feels taken from a proper epic poem.

You’re guiding both of them, mind you. At the same time. You’ll need a modern controller for this one because each brother is controlled by a different analog stick. Each has his own interaction button as well, but that’s it for the controls and thank God for that because it’s actually MORE disorienting than you’re imagining. I got confused enough by tank games that have each stick control a different tread, so having two people to run around at once really screws with my brain. Honestly, over the entire three hours the game takes I never REALLY got used to moving two characters simultaneously.

The good news is that you don’t REALLY have to get used to it for the game to work. The vast majority of the paths through the game have safe edges and no dangers to worry about. Jumping is automatic, climbing just requires holding interact at the right times, and almost none of the puzzles you’ll face require careful timing. Instead, Brothers goes off in a more creative direction to challenge you with puzzles specific to your dual protagonists. There are moments where you’ll need them both to navigate something long through narrow passageways, or cooperate to trick a monster into a cage, or get each other across a gaping chasm. In what’s easily the game’s most clever sequence, the boys are connected by a rope that they can use to swing off of each other to reach new heights.

The creative puzzles you’ll face are woven carefully into the world to feel natural, never forced. There are definitely shades of ICO here, especially when you reach the windmills or towers. That feel extends to the world as well in how intelligently it is crafted and realized, though there are a lot more people kicking around in this one. Your journey isn’t a particularly solitary one (and not just because you’ve got your bro with you), with plenty of farmers, villagers, and other folks going about their lives. There’s more than that, too… the further in you get, the more creatures of myth you’ll run into, giving the game a much more epic feel than you might be expecting from the start. 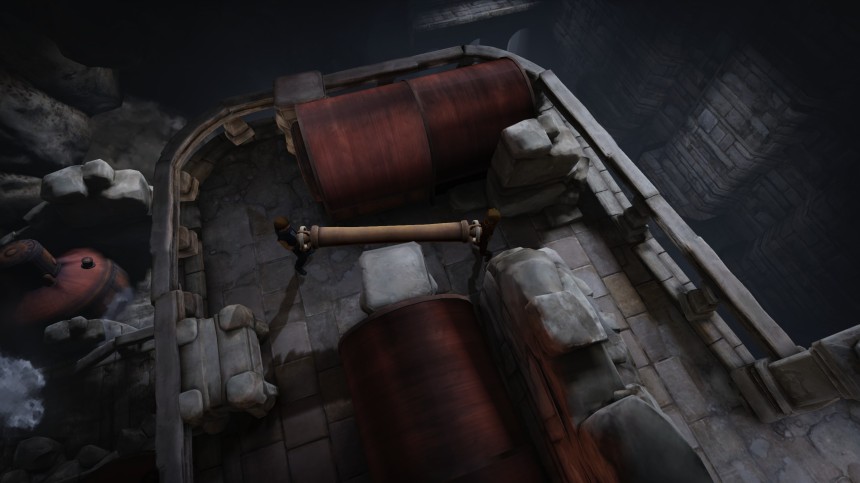 What begins as a trek through pastoral fields and scenic trails soon grows foreboding with torch-lit caves and darkened woods, and only becomes more intense from there. I won’t spoil anything but there are areas (and events) near the end of the game that were shocking in how dark they were. And then there’s the ending, which I do hope you’re prepared to face. The whole story from start to finish is expertly told through the efforts and small interactions between the brothers, and by the time it winds to a close you’re bound to feel like the unseen third sibling. Drawn in by the gorgeous visuals, excellent soundtrack, and high quality throughout, there’s even more to appreciate here than what I’ve laid out for you. Take a chance and follow these brothers on their journey, and I promise you’ll be well-rewarded for your time.