The release of LIMBO over six years ago kicked off an incredible flood of atmospheric platformers in its wake. The reasons were clear: LIMBO set a new standard for atmosphere and design in the genre. Few of its successors were able to match the look or feel, however, leaving plenty of room for a proper follow-up. That’s where Playdead has returned to with an evolution of their original formula, including enough improvements and refinements to notch another high mark for platformer design. 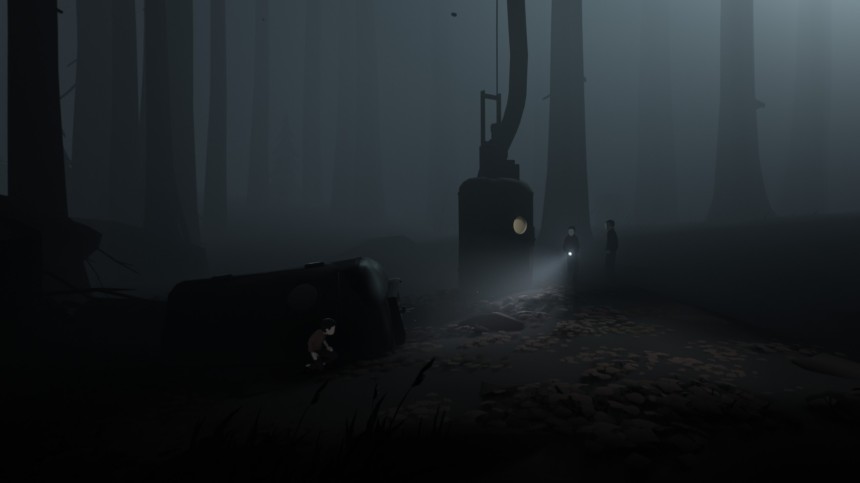 The less you know about INSIDE going in, the better. I’ll just stick with what the store itself says, “Hunted and alone, a boy finds himself drawn into the center of a dark project.” What that means is a lot of running, climbing, and sneaking through a dystopian hellscape of cities, tunnels, and farms. I will say that you’ll need to dig deep to get the most out of the story, because it’s almost all told through the environments and the details of the things that inhabit them. Let your mind wander and question as you play if you want answers, because they don’t come easily.

So much of the telling is in the landscapes, which is possibly INSIDE’s greatest strength. Not many games have such a mastery of space and scale as this one, evoking fear or comfort from simple details in the shapes around you. Early on you cross a road through a grassy field as the rain pours down, and that very basic scene gave me a powerful sense of solitude, where in other games it would be little more than a momentary transition between setpieces. EVERY location in this game is a setpiece, from vast and towering warehouses to cramped and flooded halls.

The other element that sells the world of INSIDE is its characters. We’ve come a long way from the paper-cutout silhouettes of LIMBO, as the inhabitants of this world are animated in incredible and familiar detail. Your character will struggle to climb ledges, waver uncertainly on beams, and regard his surroundings nervously in ominous places. Most importantly he reacts to everything around him, like loud noises or impacts or strange sightings, and it adds so much more depth to the experience to be experiencing it WITH him. The other beings of the game are no letdowns either, for they stumble or shamble or scramble just as you would expect a living thing in their state to do. And once you start encountering more unsettling scenes, it makes it that much more foreboding.

Atmosphere alone can rarely carry a game, but even the puzzles of INSIDE are a marked improvement over most in the genre. There are no terribly obvious physics seesaws or other contrivances here. Just about every obstacle to overcome is a part of the functioning world, some device or obstruction that happens to be in your way. This serves the dual benefit of making puzzles feel more natural to the flow of the game and also making their solutions more obvious wihtout necessarily being easier, because you can think about them in real-world terms. This extends to the enemies as well, since there is no combat. Encounters with foes are more about problem-solving and escape, and often your first flight instinct is the answer.

This makes INSIDE a pretty smooth game to get through, and it should last you between 3-4 hours. That time will be spent drinking in some fantastic atmosphere and struggling to divine the nature of the grim world you find yourself in. And then near the end a thing will happen, and I can’t really say how you’ll feel about it but for me it was both incredible and cathartic and elevated the game from great to something truly special. Coupled with the secrets dotted through the game and the tricky hidden ending they unlock, there’s an impressive experience waiting to be had here. INSIDE is short and sweet, but far, far sweeter and richer than most platformers of its type.