I wrote a follow-up to this review which you can read here.

Popular games often inspire others to follow their lead. We saw it ages ago with Doom and Starcraft, we saw it in a huge way with Minecraft, and we saw it again with Terraria, itself following in the footsteps of Minecraft. There’s nothing wrong with trying to improve on a formula unless you completely miss what made the original good, and somehow that happens all too often. Starbound seemed for the longest time to be the one true heir to Terraria, but it’s clear now it’s fallen into the same trap so many others have.

Starbound sets you as the newest member of the Protectorate, a galactic peacekeeping and civil service force based out of Earth. Your graduation ceremony serves as a brief tutorial before shit goes wrong and you escape the destruction of the planet on the first rustbucket ship you find. A quick faster-than-light jump leaves you stranded in orbit around an alien world with no fuel to leave, no tools besides your Matter Manipulator, and an aggressively helpful AI.

From this humble beginning you can make your mark on the galaxy. The main questline helps you get your ship up and running, introduces you to a trade hub with tons of stuff for sale, and sets you on track to confront the thing that destroyed the Earth. In pursuing any of these goals you’ll be exploring randomly-generated planets of all sorts, from verdant forest worlds to icy hellscapes to tentacle morasses and more. No matter the composition, each planet will have resources to gather and treasures to uncover, most of which are hinted at in the planetary scan from your ship.

Once you beam down to a planet you’ll have to hike your way around from your landing site, either across the open terrain or venturing down into the caves every world is honeycombed with. Numerous creatures inhabit these places and most of them are aggressive, so you’ll be needing to take weapons and gear and be ready for a fight. There’s a wide range of swords, axes, spears, whips, pistols, rifles, launchers, and so on to equip yourself with, each with randomized stats and effects. I never found anything too outlandish but you can dual wield one-handed items, allowing you to enjoy stabbing and shooting all at once. 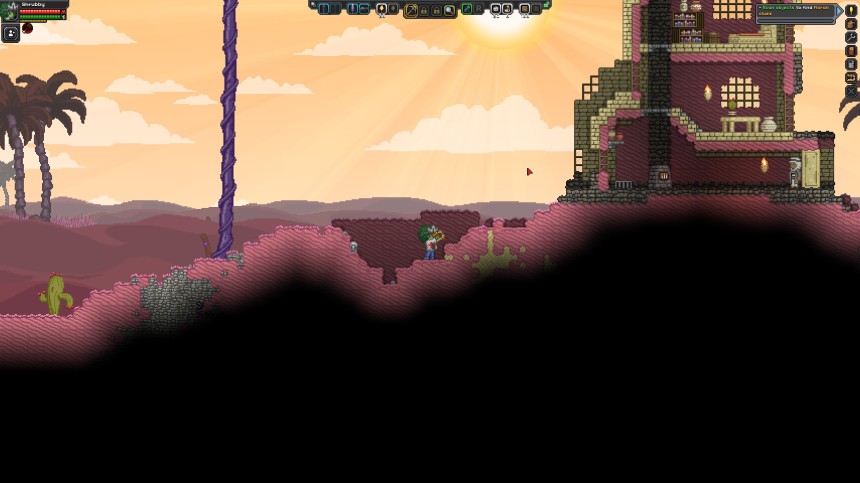 Your Matter Manipulator is used to dig, break down walls and objects for collection, and place materials from your inventory. This means there’s plenty of construction to do if you want a quaint home on the alien prairies, and you’ll need one for all the different crafting stations and upgrades needed to progress. It was here that the game started to break down for me though, because building bases in Terraria was my favorite part and I was super excited to do the same in space. However, having a base in Starbound isn’t nearly as convenient, necessary, or useful because of your ship. You need your ship to explore the cosmos and return to the trade hub for important quests and purchases, so every trip to your base is a bunch of extra beaming and warping steps. You can build a teleport pad for your base but it requires a rare drop and a TON of money for just one.

Once I realized what a pain it was going to be to maintain a base, I started to see the same annoyances in everything else. Crafting is a huge one, because there are so many additional steps and requirements just to make basic things. In Terraria you just needed the material, but in Starbound not only do you need materials, but for building blocks you need to have FOUND the item to produce before, and for other items you need blueprints which are randomly dotted around the universe. So you might have dreams of a neon techy space colony but unless you find one to strip AND score the blueprints for all the furniture, you’re stuck with your dirt and wood hovels.

Stripping buildings and resources is something you’ll spend plenty of time doing, either to make gear from ores or just get cool blocks to build with. But your basic Matter Manipulator is maddeningly slow and the upgrades require tons of modules which are, again, scattered across the universe. And even if you strip down a whole base, it fills your inventory with so many special blocks and items you can barely carry it all. Starbound has a mind-boggling amount of items and furniture and materials to play with but ironically this drags the game down because it makes it so much harder to collect and organize and use. Terraria didn’t have the best inventory system but I’ve spent so much more time in Starbound’s just trying to get the junk I want to build to the place I want to build it.

The deeper you dive into Starbound, the more roadblocks you run into. There’s a huge spread of side activities like archaeology and pet collecting and cooking and ship upgrades and vehicles but every single one is locked behind quests and random drops and money. Money is easily the worst part, because you need tons for everything you want to do, but at the base difficulty you lose a full THIRD of what you’ve earned when you die. And you’re going to die a fair bit unless you’re terribly cautious, because enemies are aggressive and do loads of damage, and even just falling a short distance can end your fragile life. It’s crushing because every time I sit down to play I start out optimistic and eager to find or build new things, and then 20 minutes later the same walls start rising up again to get in my way.

There’s so much I could talk about in Starbound that ends up ruined by needless complications and restrictions. It’s maddening because the game is ostensibly about the freedom to do what you want, explore where you want, and build what you want, but the design simply does not support those goals. Terraria understood how to achieve this, how to give players this freedom while placing new items and options just close enough to strive for. Starbound gives you an entire galaxy of possibilities and then slaps your hand away every time you reach for them, pointing you back to laborious quests or high prices to deal with first. I wish I could like Starbound, I really do, because it’s gorgeous and charming and has so much to do, but it refuses to just let you enjoy any of it. Until it learns to ease up I’ll be building castles and soaring through the clouds in you-know-what, because it doesn’t feel so much like work there.