Woodle, woodle, now that’s a funny word. It refers to your little tree stump character that you’ll be hopping and scrambling all over creation with, and it’s an appropriately adorable name for an adorable little fellow. I could say the same for the rest of the game, that it has a simple, even precious charm to it. Unfortunately that’s about all I can say about it without digging into all the parts that are lacking, so before I do that, let’s just enjoy that title a little more. Woodle. 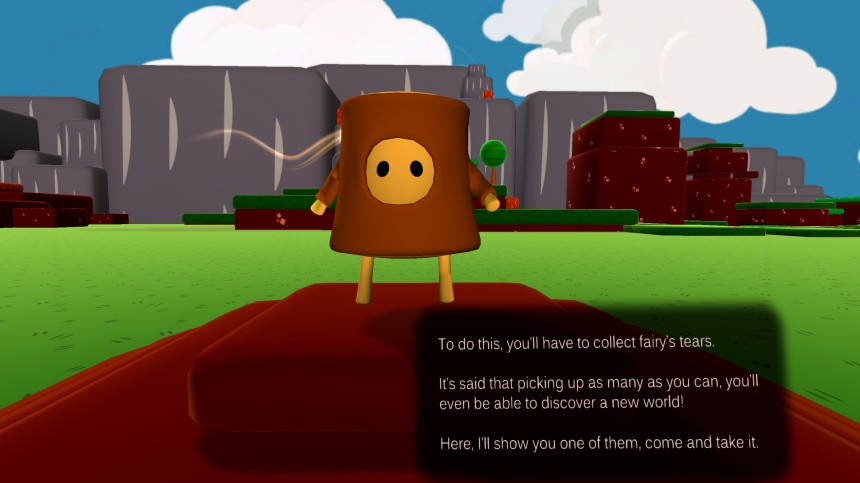 Woodle Tree Adventures opens with a great mustachio’d tree raising you whole from the earth and commanding you to bring water to the land. This is accomplished by traveling to six different worlds, finding the three giant fairy teardrops floating around, and taking them to the three giant Dixie cups at the end of the level. Along the way you can collect piles of berries that unlock new items for you, as well as a gaggle of precious and mostly passive monsters to maybe get in your way.

The colorful screenshots might hearken to mind Mario 64 or any of his other 3D outings, and that’s not too far from the mark. Each of the six levels is a mass of blocks and platforms floating in a vast blue sky, and you have full range of moment to scamper about them, hoovering up berries and droplets. Your woodle dude has none of the fancy moves that Mario has trained up over the years, just run, jump, and bat things with his leaf. That’s plenty to get through the different worlds of forests and beaches and ice and bees, because there are no puzzle elements or secrets to speak of.

This is where the game starts to show how thin it is, because each level is exactly what it says on the tin. 100 berries and 3 droplets, and you only need the droplets to win. The berries are added up at your house between levels and unlock new leaves to swing, but all the three fancy leaves do are let you shoot an air gust different distances. There’s also a bandanna that’s just for show and a seventh world you need 600 berries to access, but that doesn’t mean you need to find every berry. No, every time you replay a level you can collect all the berries again, so if you were so inclined you could grind out all the unlocks on the very first level (do not do this). And once you beat the sixth world, you get a THANKS FOR PLAYING screen and that’s it.

There’s not going to be much reason to run around in the game beyond finishing it because the basic elements are just as threadbare. The platforming is stiff in its physics and sticky in how you get stuck on edges and walls. Animations are incredibly basic, rendering combat nothing more than waving a leaf and watching enemies slowly fall over with a sad bloop. There’s literally no UI so forget about keeping track of the berries you found, and no camera controls so enjoy 3D platforming from a fixed angle. The camera thing is particularly damning because there are triggers around the levels that flip it to side or overhead angles but don’t flip it back when you leave the area, so if you take an unlucky fall you might be doing a 3D jumping section from a profile view. 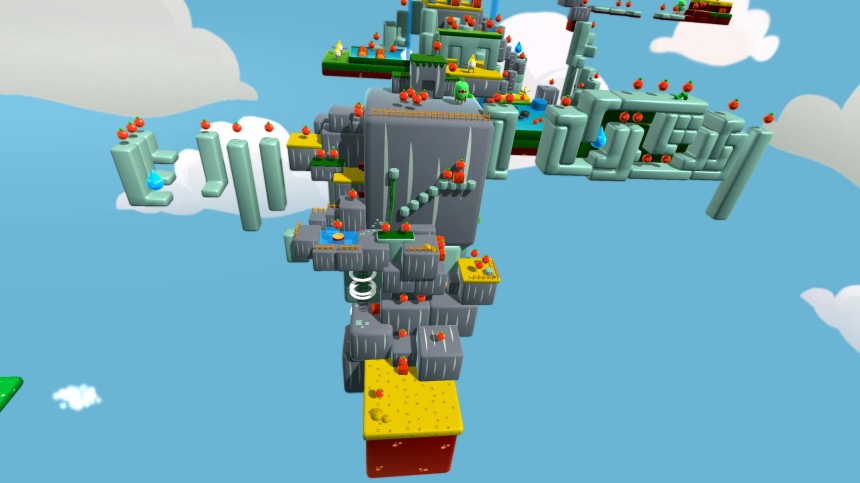 I had high hopes for Woodle Tree Adventures based on how cute and platformy it looked, but it plays more like a proof of concept than a finished game. There’s not even a pause menu for cryin’ out loud, just a splash screen with the controls and a button prompt to quit the game. It’s a title that’s very clearly the work of one developer, and while it’s a great accomplishment in that respect it’s still lacking the quality of a retail product. I’d love to see a sequel with more polished movement, more professional graphics (and sound, some of the piano tracks kill me), and just more to do. There is actually a sequel, but from the looks of it none of those improvements have been made. So sorry, little friend woodle… your name is a winner but your game really isn’t.