Roguelikes don’t have to be hard to be good. Sometimes you just want a relaxing sojourn into new lands, with adorable critters to spar with and adventures to be had. For those times we have Sproggiwood, easily one of the chillest and most charming roguelikes around. Guiding your chosen hero through quaint dungeons is a pleasure for any occasion… even after the game reveals its true colors.

Sproggiwood is the story of Sproggi of Sprog, an impish little nature deity hell-bent on bringing civilization to his corner of creation. For this he turns to you, a member of the adorably boxy Cloghead peoples. As you heed Sproggi’s call and tame the wildlands your little Cloghead village grows, opening up new class and equipment options to tackle dungeons with. There’s no city-building to be had here (unless you really like arranging shrubberies), just a clever progression system to reward your successes and blunt your failures.

This IS a roguelike, of course, so failures are expected. Each of Sproggiwood’s ten missions is a descent into a different cave or dungeon of the world to beat a boss. You get one life to accomplish this task in, and any items or equipment you find on your quest are lost at the end of that quest, win or lose. Your character will also gain experience and level up in these dungeons, granting skill points to unlock or enhance the four skills granted by their class. This progression, too, is reset after each mission.

If this sounds grating to you, understand that missions in Sproggiwood last a matter of minutes. Each is like a mini-roguelike dive confined to a single dungeon, and each attempt earns you currency to spend in your town. Money unlocks permanent upgrades to your stats or bonuses to various systems, or unlocks equipment to start any mission with. You have to find an item before you can purchase it but in a way this allows you to hang onto that sweet, sweet life-sucking sword you found that one time.

The roguelike and progression systems are sound, and luckily they are appended to a simple but very effective gameplay loop. Movement in dungeons is turn-based as most classic roguelikes are. Your basic attacks hit adjacent to your character but among the four skills of each class there are almost always ranged or area attacks to unlock. The classes are all smartly designed with combat and mobility options that can be used to great effect, such as the Archer who has several ranged and piercing attacks along with a chainable combat roll. You can also find potions and scrolls that grant dramatic effects, and shrines and treasures to gain new boons from.

You will need all of these tools to tackle Sproggiwood’s precious foes, for none of them are simple fodder. Even the most basic slimes and ambulatory mushrooms have special skills like leaving slippery puddles or sneaking up on you. Later enemies can have abilities that require extensive planning to counter such as the twin fish that must be beaten simultaneously or the infamous black slimes which reproduce wildly if left unchecked. Bosses also have gimmicks that must be strategized around, though they tend to be larger versions of common foes. 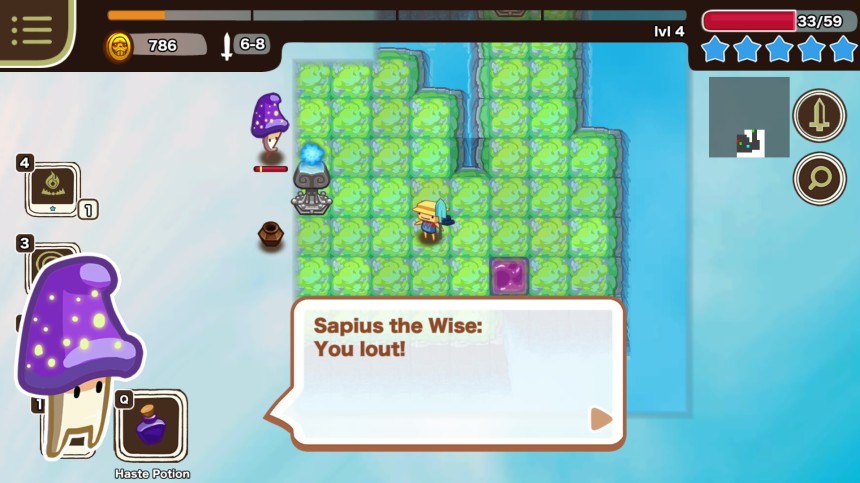 Once you come to grips with the class concepts and the battle system, it’s smooth sailing through the game. Every time you beat a mission with a different class you’ll get a large cash influx to further bolster your heroes, and later upgrades can make you nearly unstoppable. You should have little trouble beating the game, at which point you might notice there’s a third difficulty beyond Easy and Normal, called Savage. You might decide to give this mode a try, at which point the adorable goatmen and frogs you’ve been wailing on will curbstomp your face into paste. Savage difficulty gives new behaviors to ALL the monsters in the game, most powerful enough to make even the lowliest slime an existential threat. As likely as you were to beat the regular game, you’ll have to work your ass off to even have a hope of conquering Savage.

This, really, is the beauty of Sproggiwood. It’s a marvelous introduction to the roguelike genre with its simple, engaging combat and charming presentation. Should you grow bored of breezing through dungeons, though, there’s a whole world of constant kicks to the teeth you can pit yourself against. The critters are just as adorable in any difficulty, with their soft colors and thick lines. The soundtrack also deserves some major recognition for hitting the pastoral fantasy mark dead-on. It’s one of the few soundtracks I’ve gone out of my way to purchase because of how perfectly it evokes the right mood. Really the same could be said of the whole game, from the hilarious writing and clever story all the way down to the combat that never really gets old. Sproggiwood hits all the right notes for a game that can relax or challenge, all while keeping a smile firmly affixed to your face.