You have one job if you make a shooter game, and that’s to make the shooting good. Everything else, the story, the graphics, the progression, EVERYTHING is gravy to the delicious meat that is the shooting. If your weapons feel like squirt guns or your enemies don’t bother to react to being shot, there’s precious little that can salvage your game. Tower of Guns is certainly named like it understands this fact, but I can assure you, it very much does not.

The titular Tower of Guns is just that, a tower of enormous cannons, mortars, and turrets rising skyward from an indistinct cityscape. This isn’t the finely-crafted world of Enter the Gungeon, mind you, it’s just a big honkin’ tower of things that shoot things. Your job is to climb it and, um, shoot things, I guess until you shoot everything that can be shot. There’s some dialog at the start of each level but it’s purely for comedy and reveals nothing about the world other than it is terribly silly. 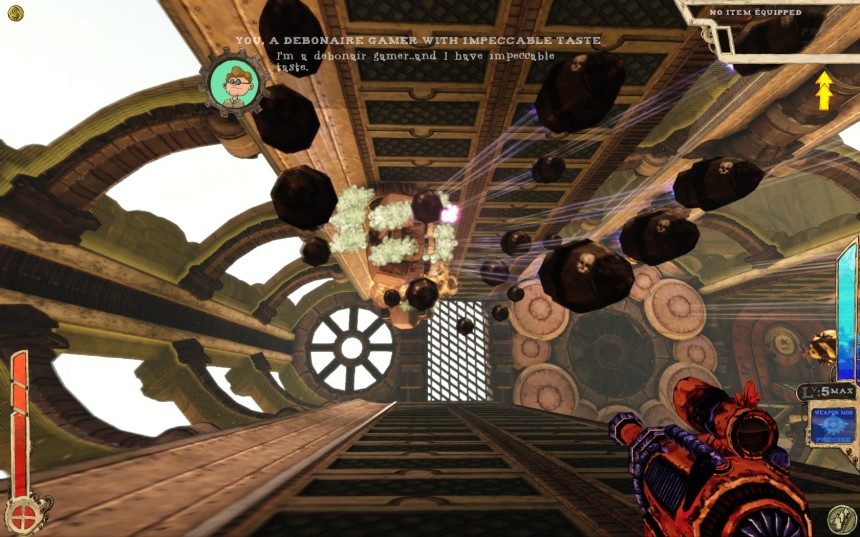 Each floor of the Spire of Firearms is a string of random chambers containing random enemies to battle. There are no branching or side paths to take, so don’t expect much exploration unless you really like checking out the cavernous rooms. Aside from the numerous enemies these rooms can contain money, health and experience pickups, and badges that grant new abilities like extra armor or double-jumps. At the end of the floor is a boss to shoot at a whole lot, and then an elevator to take you to the next floor.

This is a fine and simple premise for a game but literally everything else I have to point out about it is a letdown. Let’s start with an obvious red flag: In this game called Tower of Guns, you get one gun to use during your entire run up the tower. One. You choose it from a menu of 10 (which all must be unlocked first) along with a perk to color your playstyle, and you’re married to it until you win or die. You can level it up via pickups (which you also lose when you take damage) and add a mod to change how it fires, BUT YOU GET ONE GUN THE WHOLE TIME.

Finding badges or mods to change up your playstyle isn’t going to be easy either, because ToG’s rooms are nonsensically huge. These aren’t recognizable places, they’re enormous boxes that take entirely too long to traverse and serve only to give more space to the many things that want to kill you. And there are many things, yes, but basically only one KIND of thing, and that’s turrets. Cannonball turrets, missile turrets, flame turrets, flying turrets, huge turrets, homing turrets, and so on. So get ready to take that one gun and use it to shoot a whole lot of the same thing, in the same way, in really huge-ass rooms for awhile.

All this might be forgivable if the shooting itself was good, but as I alluded to above, hahahahaha NOPE. Your guns are the Nerfiest of weapons, firing their payloads with sad pops and little thumps. My favorite weapon is a cannon-sized handgun that fires bullets bigger than I am tall, and it sounds like pulling a box out of a slightly larger box every time I pull the trigger. Enemies are no more imposing; even the cannons large enough to fly a Boeing through fire with a flaccid fwip. And they won’t do you the courtesy of reacting to getting shot either, just flashing red to admit that yes, I guess we’re being hurt now.

The worst part, though, is how you’re going to die. You have a health bar that enemies will whittle away at little by little, at least until you learn how circle strafing makes you functionally invulnerable because your hitbox appears to be thinner than a god damned club cracker. This will get you on to the fourth or fifth floor, until you run afoul of a room-filling boss or an insane gaggle of flying enemies. All of a sudden you’ll be mobbed by things that eat steadily at your life, and without any sort of invulnerability or recovery options you’ll be dead before you know what happened. The jump from fine to dead is always a shock, and even if you survive with a sliver of health the health pickups don’t really give enough to recover from a real drubbing.

Do I sound angry? I’m a little angry. Tower of Guns is a promising premise, and probably was even moreso at launch considering it predated most of the quality roguelike-FPSes I play now. It’s got a look I absolutely adore, very similar to the thick lines and oppressive colors of the Cannon Fodder segment from the 1995 film Memories. That’s a super specific reference but I assure you, if you’ve ever seen it the style is wonderfully spot-on. There’s every reason for this to be a fun, successful game, except it feels like no one tested anything while it was being developed. Every part that can feel bad feels bad, and every opportunity for fun player choices and interactions was missed. With so many better options now like Eldritch and Ziggurat, you’re far better off turning away from ToG and never looking back.