What is America? Land of the free? Cheeseburgers and hot wings? A miserable pile of secrets? The folks behind Broforce know the truth: Over-muscled movie stars dispensing explosive liberty. And they built a hell of a game out of it, not the deepest thing in the world but chock full of chaos and laughs and challenge. Just like Real America. 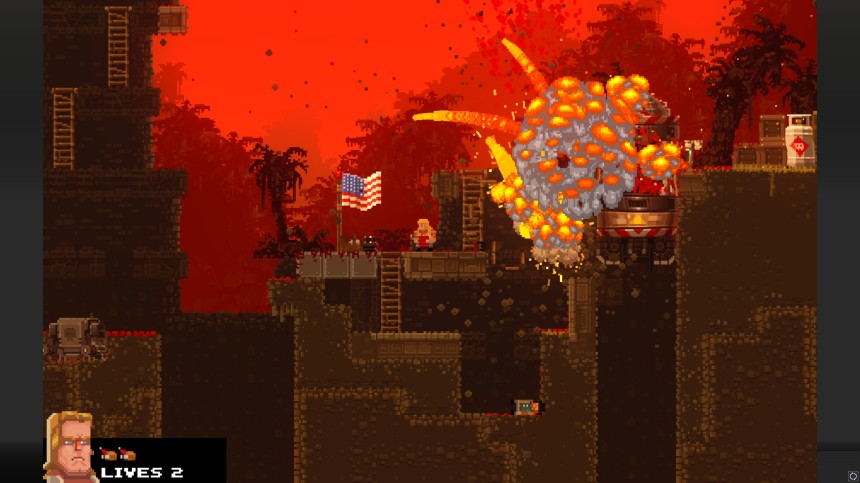 Terrorists are doing their thing around the pixellated globe, and the US has called upon Broforce to liberate the world from their balaclava’d oppressors. Broforce is a motley crew of every action hero you can think of, from Rambo and John Matrix to Mortal Kombat’s Raiden and whoever Van Damme’s character was in Time Cop. It’s a hell of a trip through 80s and 90s nostalgia as you blast your way through dozens of sprawling levels with their unique moves and weapons, unlocking more and more bros as you go.

The levels themselves are vast expanses of destructible terrain and enemies awaiting death. Whatever weapon you have can carve through any surface you come across, and explosives like barrels and propane tanks are somehow more plentiful than bullets. Unless you are absolutely meticulous in your approach, every level is going to light up like the Fourth of July less than a minute in. Your bros call all scale walls with generous leaps but it’s still possible to render a level unwinnable by annihilating enough of the landscape. 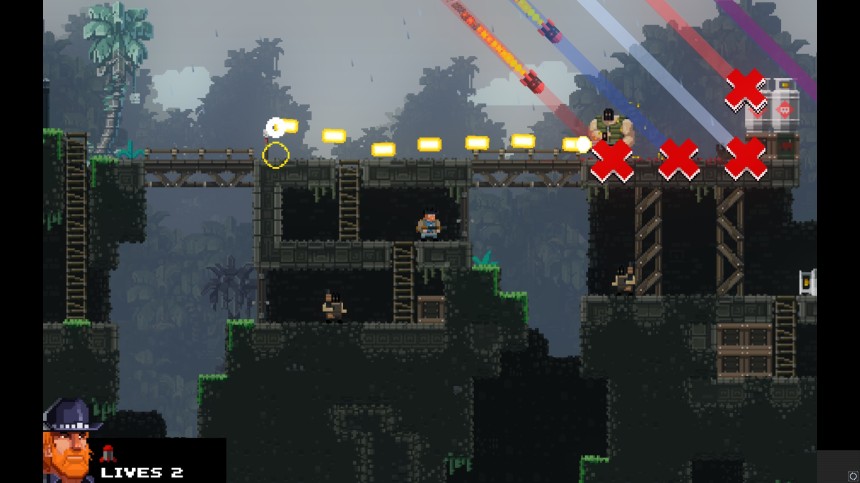 Restarts are not nearly as painful as they might sound, though. Broforce is designed with death in mind, not just because of how you can carve bloody paths through your prodigious foes. One shot from anything will kill you, and while explosives can be finicky they will more often than not gib you too. Every level is full of flags to raise that serve as instant checkpoints when you bite it, and running out of lives either starts the level over or puts you back to one of the big flags on longer levels. No level should take you more than two or three minutes to beat, so starting over is never much of a setback.

A big part of this is how the game randomizes your bro. Every level starts you out as a random bro with one life, and finding hostages changes you into a new bro and grants an additional life. I know this is a contentious feature with a lot of people but I assure you, Broforce wouldn’t be half the game it is if it let you lock into one bro for the whole game. With the number of deaths and restarts you’ll be going through, having a new character almost every time help keeps the frustration down as you find new ways to murder the same enemies. All of the bros have effective attacks and useful specials, even if they don’t appear so at first blush. I can only think of one or two times where I was really handicapped by a specific bro up against a particular boss, and that was easily resolved by dying. 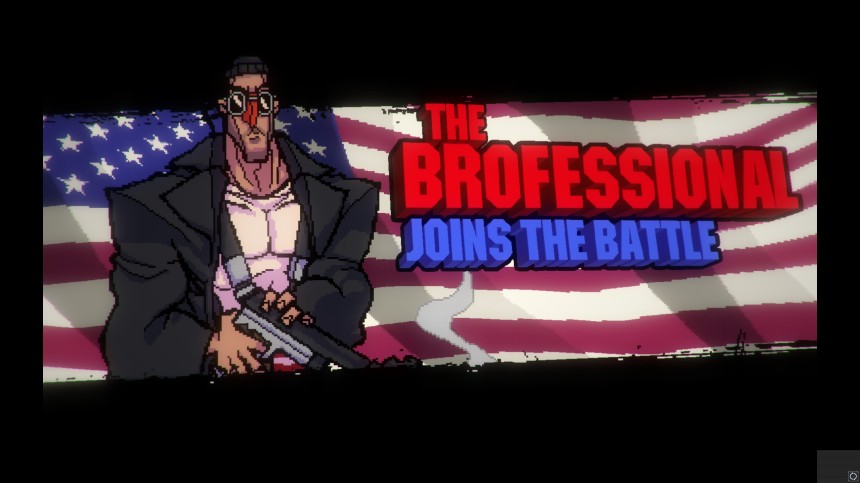 The bosses are one place you might get stuck, because they tend to be pretty big jumps in difficulty from the regular levels. Each has their pattern and their weak points but they create huge killzones around them with massive salvos of ordnance. They can also get bugged out pretty easily (sometimes to your advantage), especially by the melee characters like Blade and Conan. Later levels ramp up the difficulty pretty hard too, so prepare for some Meat Boy-esque sessions if a particular bunch of enemies are giving you trouble.

Broforce gives you plenty of ways to tackle these challenges, as well as make them even more challenging. Side missions during the campaign unlock additional item pickups like explosive RC cars and steroids to help you through tough sections. There’s also full co-op support, though whether or not that makes things easier or harder is up to you and your buddies. Then there are additional difficulties including a straight Hard mode and Iron Bro mode, where freeing bros adds them to a roster and when they die, they’re gone. Assuming the hilarity of splattering hapless terrorists outlasts your frustration, there’s a lot to keep you busy here. 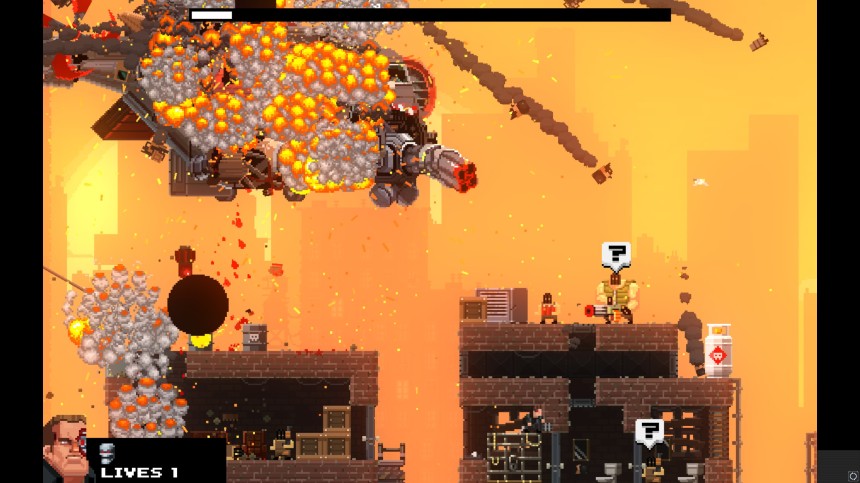 The hyper-patriotic presentation and over-the-top violence does a lot to endear Broforce, giving the familiar pixel platforming a grimly humorous edge. The chunky pixel graphics help keep things lighthearted but it’s the sound design that really steals the show with the adorable pitter-patter of your meaty bro’s feet and the rumbling, excitable narrator cheering you on. It’s a great game to sit down to five minutes of mayhem with, or power through long swathes of levels when you get on a hot streak. There’s not much more here than blood and chaos, but it’s done so well I can hardly stop from partaking of more.