I’m not really sure when space westerns became a thing. My secret inner weeb wants to point to Cowboy Bebop or Trigun, but it just as easily could have been Firefly or Starcraft or something else entirely. They’re the logical conclusion of humanity expanding into space, really, embracing the freedom of an open universe without the unity or enlightenment of something like Star Trek. This is precisely where Rebel Galaxy lives, in a simple wild west approach to space battles and exploration.

You begin the game by inheriting an old junk freighter from your aunt and running errands in it for an old alien acquaintance of hers. Following the main story missions unravels a lengthy, familiar tale of deep space intrigue and ancient artifacts. This is of course only one option of many in the vein of something like Sid Meier’s Pirates! because you can just as easily haul cargo, claim bounties, or pirate convoys for as long as the game holds your attention. A fair spread of ships, weapons, and upgrades are available across several factions for you to spend your hard-earned credits on and advance in power.

The moment-to-moment gameplay of Rebel Galaxy is like an arcadey version of naval combat. Capital ships in this sci-fi reality still rely on broadsides for most of their firepower, so you’ll be sidling up to just about everything you want to blow away. You also get auto-targeting turrets and a secondary weapon that can fire missiles or flak, as well as shield and speed boosters to expand your tactical options. I wouldn’t say there’s a lot of depth to the combat but positioning and prioritizing targets can mean the difference between victory and the cold embrace of hard vacuum.

Unless you get really into the mostly generic story you’re going to want to spend most of your time amassing wealth for bigger ships and guns. There’s a basic commodity system you can play space trader with that requires some attention to trade routes and emergent events, but most of your time will probably be spent on missions. Each station has a mission board offering bounty collections, blockades, pirate hunting, cargo hauling, and more. These missions are assigned a difficulty based on your ship’s current loadout, which is terribly helpful because anything above Average carries a very real chance of annihilating you in an instant.

Rebel Galaxy offers a very promising setup and world to prosper in but suffers from a few issues, the difficulty curve being chief among them. At some point you’re going to hit a wall where your next story mission or the only profitable missions are High or Very High risk, and if the enemy composition is not favorable to your particular ship you’re going to die very, very fast. Upgrading to a larger ship is the easiest way to climb the difficulty curve but can require a LOT of side missions and busywork if the next hull in line isn’t very cheap. People who are easily distracted and habitually clear side missions will fare a lot better than most here.

The further you get the more technical issues you’ll see crop up as well. Late in the game I started having mission-critical items disappear and enemy ships not properly register as objectives, which led to some aggravating wastes of time. There’s also a lot going on in every star system, with pirates and militia lurking everywhere. This sounds cool at first but missions don’t account for or clear existing entities in the mission space, so a Low risk battle against some frigates can turn out to be instantly fatal if the game decides to spawn pirate dreadnoughts in that particular sector.

I’ve had my fair share of frustration with this title, but most of my time in it has been a relaxing and rewarding romp around the galaxy. The systems you explore are expansive, colorful, and full of debris fields and nebulae to explore for secrets and bounties. Warping around has a great feel to it, with rich engine sounds and visual distortions through space. The twangy western feel is out in full force as well, with plenty of rough-spoken captains to deal with, junky ships to pilot and pilfer, and plenty of wailing country rock to fill the silent void. 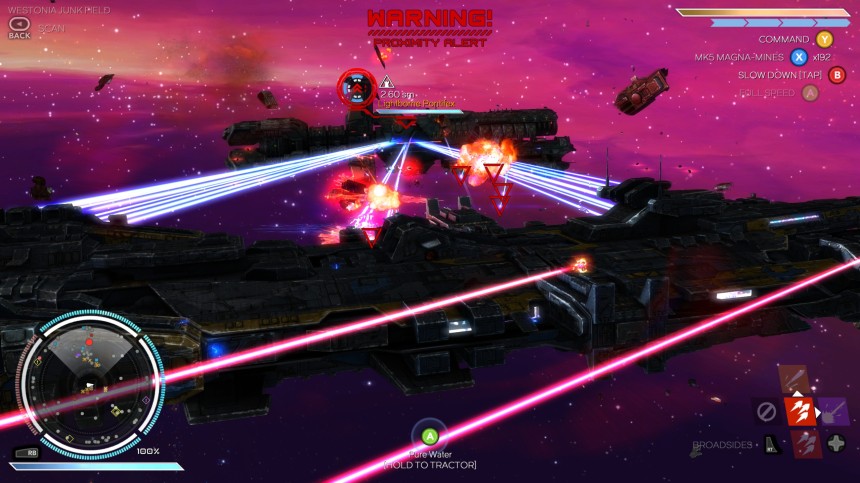 At times it feels very much like a friendlier, simpler, offline EVE Online, though it never really matches the same sense of scale or vastness. I mean that in the best and worst ways, too, because it never really aspires to be more than a basic space hauling shooting gallery. And yet, there’s an undeniable draw to scraping together the credits to land a new class of vessel and taking it out for a spin in the places you feared to tread before. That’s where Rebel Galaxy really succeeds, in giving you a universe to explore and plenty of reasons to see it all.