Review: Abyss: The Wraiths of Eden

It turns out you can make a hidden object game out of just about anything, and Bioshock is no exception. I’m not being facetious here either, you can only have so many art deco steampunk underwater cities before someone starts making the connections between them. But Abyss manages to go a bit beyond Rapture with its own supernatural angle, and makes a pretty entertaining and relaxing game of it to boot.

You play a professional diver on the trail of her husband who disappeared on a routine excursion. The tutorial scenes get you to the gates of Eden, a sprawling underwater metropolis that just kinda flew under the radar, I guess? The place has been overrun by the titular wraiths, ghastly cloaked things that really do not want you finding your beau. To thwart them, you’re going to have to pick up every piece of garbage you can find and solve the brain-teasers that people used to lock things in Eden instead of, y’know, actual fucking locks.

This is all very standard fare for a hidden object game, and in particular an Artifex Mundi one. As you travel about the undersea burg you’ll come across hidden object scenes to solve. Each has 12 items to find, most just by clicking them but some by combining other items. Those scenes grant you an inventory item which, along with other loose objects you find, allow you to open up new areas and progress the plot. Abyss has an interesting pace to its collecting, where most of the items you need for a particular area are found in or near that area. You’ll often fill up and then clear out your entire inventory in a single wing of the city, which helps cut down on laborious backtracking.

That’s true until the last hour of the game, at least. Once you identify the source of the wraiths and how to defeat them, you’re set on a city-wide scavenger hunt to assemble the bits and bobs to do it. This last leg involves a LOT of backtracking, almost enough to make up for the excellent pacing earlier on. There’s also a central elevator you’ll be using a lot that cycles through three floors without being able to select which floor to go straight to, and by the end of the game I was about sick of pulling that particular lever.

Despite these gripes, Abyss is a very solid adventure. The scenes are crisp and colorful, the puzzles are fun and have a few unique elements, and the story has a few welcome twists to keep you involved. I mentioned that it’s not a straight Bioshock rip and I meant it… fans of Lovecraft might want to consider this one more seriously, in fact. There are even some good spooks to be had here, an uncommon feature for hidden object games. Your protagonist has an unfortunate habit of disturbing corpses and not noticing hostile beings until they’re up in her face, and a few of those gave me some embarrassing starts. 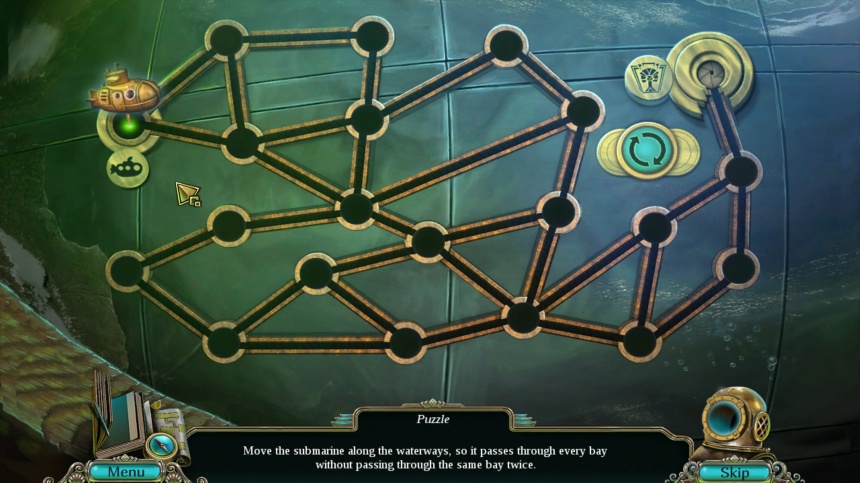 The quality-of-life elements are all in place for a satisfying experience as well. The map is very clear with where you need to go, though it doesn’t allow for fast travel. The hint system works fine, and much like many Artifex Mundi games there’s an optional domino game mode that you can play in lieu of the actual hidden object scenes. It’s a nice consideration for folks who want to enjoy the adventure without all the item hunting. That means that even if you aren’t a HOG enthusiast, Abyss is a great way to relax and puzzle through a deep-sea city of mysteries.