I wasn’t sure what to expect from Team Arena. It never caught on back when it released, or at least no one I played with bothered with it. Turns out it’s a pretty full package, with new game modes, new powerups, and new bot systems to spar with. It’s enough that it probably would have caught on, in fact, if it hadn’t committed one of the cardinal sins of multiplayer games.

Team Arena continues with the same “story” as Quake III Arena, that the yet-unseen Vadrigar have a hard-on for gladiatorial combat, and the Quake veterans they’ve nabbed for it have had enough and are teaming up. The new game modes are all team-based, including classics like Capture the Flag and Team Deathmatch but also new inventions like One Flag CTF, Overload, and Harvester. One Flag CTF is just that, CTF with a neutral flag to claim. Overload places a destructible node in each base and awards victory to the team that destroys the opposing node. Harvester is like Team Deathmatch except kills produce skulls you can collect, which then must be dunked in the opposing base to score points. 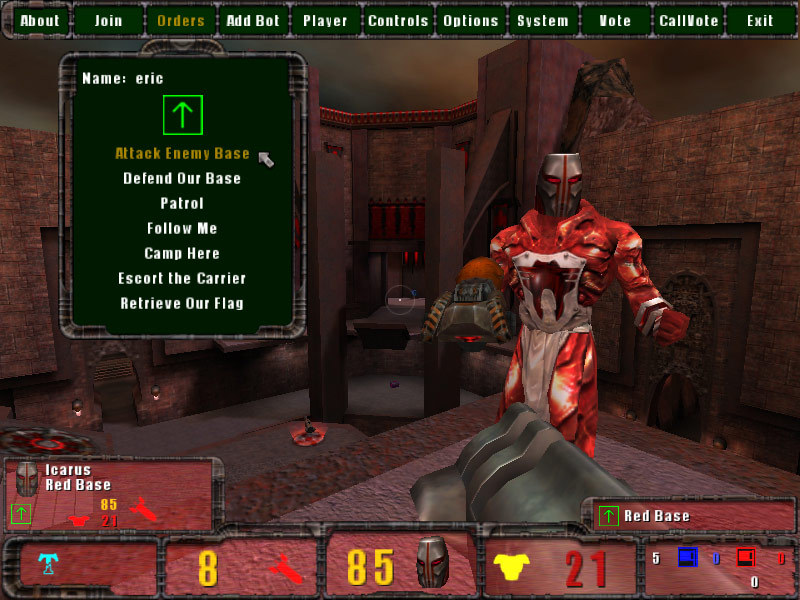 There’s more than just new modes (and associated maps) to see here, of course. A handful of new weapons are included, mostly throwbacks to older Quakes like the chaingun and nailgun (which is more flechette shotgun than the Q1 version) but nothing that will usurp the basic Q3 arsenal. A new class of powerup that persists until death seeks to imitate class-based multiplayer by giving the holder double health or insane movespeed, but only spawn in your base on long cooldowns. You’ll find a few other odds and ends like a suicide bomber power and an invulnerability shield as well.

It is exceedingly likely that none of this content sounds new to you, and that’s not just on account of the intervening 15+ years. The big knock against Team Arena at its release was that it was content that had already been added to Quake III Arena via modding. And it’s true, even now you can find all of these modes and far, far more in the Q3A modding scene. This is doubly important if you want to play any of them with humans, too, because Team Arena has zero servers running last I checked. Zero. The cardinal sin of multiplayer that I mentioned before is splitting the player base with paid content, and that’s exactly what Team Arena threatened to do. Instead of migrating to the new title, however, everyone just stuck with what they knew and loved.

If you’re determined to give Team Arena a fair shake, the bot matches are bound to entertain you at least as much as they did in Q3A. You can give orders to bot teammates, and supposedly they will pick up habits from your orders and playstyle. The presentation is lacking compared to the clean interface of Q3A though, with overly-busy menus and a chunky HUD that you’ll need to learn the parts of. Graphics and sounds in matches are still the same as ever, along with the frenetic firefights and high-velocity movement. But when all that’s offered by the base game, along with actual people to enjoy it with, there’s not much reason to bother with this.