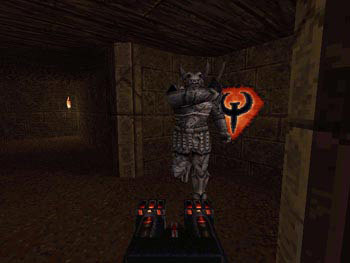 How’s THAT for a metal title? The second expansion of the original Quake held nothing back in the naming, and similarly holds nothing back in the challenge. Whereas Scourge of Armagon felt at times like The Lost Levels to Quake’s Super Mario Bros, Dissolution of Eternity sometimes seems like The Loster Levels. This isn’t necessarily down to good design, either, so if you’re here looking for more quality Quake, you might want to read on before pulling the trigger.

Whereas Quake had four episodes to choose from and Armagon had one long campaign, Dissolution has two themed episodes to frag through. The first, Hell’s Fortress, is a series of sprawling castles, caves, and catacombs. The second, Corridors of Time, is an assortment of historically-themed touching on Egyptian tombs, Mayan sacrifices, and, uh, wizard towers. You might note that none of these lineups contain anything techy or eldritch, and that’s an important thing to keep in mind. Dissolution’s 14 levels are all roughly castle or tomb themed, skipping two of the major Quake aesthetics and leaving most of the grunts behind.

A strongly-themed pack isn’t a bad thing as long as the levels are executed well, but for the most part I can’t say they are. The first level of Hell’s Fortress is a prime example of the pack’s shortcomings. It’s a castle you infiltrate through towers and tunnels, but all the architecture is flat, featureless, and relies too heavily on single textures. You’re going to get very, very tired of olive brick and brown caves after just a few levels, owing in part to how much longer and larger they are than base Quake maps. The later parts of episode one and parts of episode two have more interesting designs but they feel like the exception, not the rule.

The gripes don’t end at the architecture, either. Encounters throughout Dissolution tend to happen in cramped spaces like narrow corridors, rather than the platforms and arenas you’d expect from the prior Quake maps. Part of this is obviously owing to the heavy reliance on knight enemies, but once ogres and fiends start getting mixed in you’ll find fights ending very quickly, often not in your favor. The new enemies only exacerbate this, with most of them having wide attack patterns and several exploding on death. And if that wasn’t enough, most levels rely heavily on traps like collapsing floors and swinging axes to up the ante, but instant death in a lava pit only leads to frustration given the length of the levels. 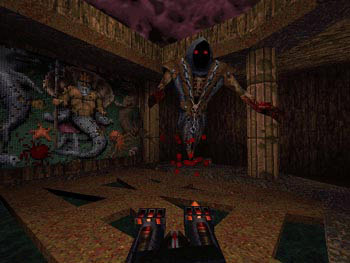 At least the new weapons help blunt the painful combat. They’re not really new weapons, but new ammo types for your existing weapons that generally do more damage. Nailguns get lava nails, launchers get cluster explosives, and the lightning gun can be switched to a BFG-style projectile. For some reason the ammo placement doesn’t seem to take the new ammo types into account, so you’ll be topped off on most ordnance even through pitched battles. There are some creative item additions like shields and gravity belts, but the levels are never really designed to take advantage of them, as if the item and level designers had no idea what the other was doing.

Overall, Dissolution of Eternity plays like a more immediately lethal form of Quake without much else to add. The levels are longer but not as expertly crafted in look, feel, or mechanics. Between the cramped combat and obnoxious traps you’re more likely to run into bouts of frustration, and the new enemies, ammo, and items don’t make much difference in the face of that. It’s more Quake and more Quake is good, but if you’re still jonesing after the base game and Scourge of Armagon, you might be better served with community maps.