Wolfenstein is such an odd series. The original formed part of the bedrock that first-person shooters are built upon, but then vanished as Doom, Quake, Half-life, and others grew the genre. Instead of becoming a franchise it resurfaces every decade or so, under the guidance of a different studio, to fulfil our Nazi-killing quota for a time. Now we have this generation’s Wolfenstein, brought to us by Machine Games, and after blasting my way through it I can only hope it’s going to stick around this time.

The New Order follows BJ Blazkowicz, a square-jawed Captain America type, as he assaults a secret Nazi stronghold in 1946. The Reich has an ace up their sleeve in the form of General Deathshead, one of those jack-of-all-mad-scientists that’s good at making everything lethal. The game opens with an intense bombing run that works all the basic controls in as part of thrilling stunts, and keeps on going with combat as you hit the beachhead and start mowing down SS. There are giant robots to crush, commanders to assassinate, towers to scale, cannons to fire, and huge firefights to overcome. The battle reaches a fever pitch, the mission goes south, and you suddenly realize that was just the first chapter of a sixteen-chapter game.

Easily the best part of TNO is the incredible depth of gameplay, which is striking considering how straightforward its predecessors were. Every one of the game’s chapters is different in some small way, either being more focused on stealth, or giving you a new vehicle, or arranging battles in a unique way, or just having a different pace from the rest of the hectic, brutal adventure. It’s especially good about giving you breathers between intense chapters or battles, as well as plenty of opportunities to explore. Each level has dozens of secrets, not the old hump-the-walls kind but permanent health powerups or collectibles or other bonuses hidden away in logical, secluded places. 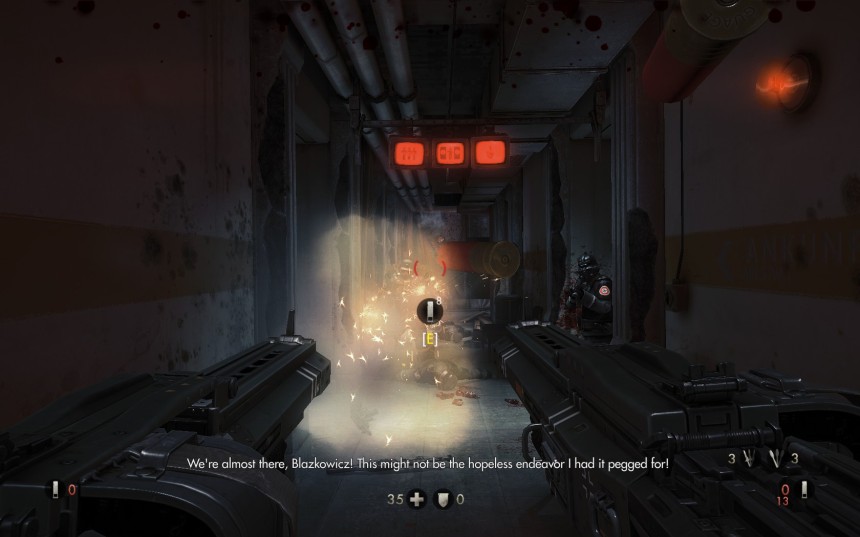 You’re not just shooting and scrounging, either. There’s a whole perk system that runs parallel to the game that rewards you for completing certain tasks, like getting X headshots with a specific weapon or Y kills with explosives. There are four categories of perks that are roughly divided by playstyle, so players who prefer stealth or going Rambo will accumulate perks to help them do so more effectively sooner. It’s a good way to get you to change up your style, too, because TNO has so many options when it comes to fighting that you might forget some exist.

That’s not an exaggeration, either. You’ll find maybe half a dozen guns in the game but each one has dual wielding and a robust secondary fire mode, which can turn your assault rifle from a mid-range sniping tool to a room-clearing double rocket launcher. There’s also melee combat and silent takedowns, combat slides that let you keep shooting John Woo style, a seamless cover system, and more. And none of these systems are superfluous because your enemies can be just as varied. Certain weapon types are more effective against armored targets, and the more difficult enemies might have weak points or certain sequences to defeating them.

All of this is built on a game with a strong vein of reverence for its origins, with health pickups that can overcharge you to 300+ and an endless stream of helmets you can slap on for 5 armor apiece. The base movespeed is refreshingly high, letting you run and gun as you please, or snoop around and scramble Nazi brains with your knife. It’s a vicious, brutal game with dismemberment and melee kills, and plenty of terrible things will happen to the many characters you meet as well. Here the game walks a fine, featuring a story with strong emotional beats and some very grim overtones, and then has you cracking wise about killing Nazis or shoving them into toilets. It works for me, with the lighter parts almost a coping mechanism for the overarching despair, but I could see it feeling whiplashy for others.

As if that wasn’t enough, The New Order is a jaw-droppingly beautiful game. Characters are rendered in cinematic detail, your weapons are hefty and bold, the scenery is meticulously crafted for both incredible vistas and personal touches, and the action is animated with expert skill. The sound design is masterful as well (especially the soundtrack, my God) and you will feel every explosion and impact as you kill your way to the incredibly finale. Your journey will take you to a dizzying variety of locales to show all of this off, including just about every secret Nazi stronghold you can imagine, each rendered and polished in its own unique style.

One playthrough should take you 10-12 hours but there’s an interesting choice in the first chapter that splits the game into two timelines, each with small differences to paths taken and story beats. You can also sink plenty of time into unlocking all the perks and turning up all the collectibles if you’re the completionist type. Or you can just keep killing Nazis, because Wolfenstein: The New Order makes it an exquisite pleasure. This is easily one of the top FPSes of this generation, and no matter your style of play or taste in game you owe it to yourself to give it a try.