I picked up AdvertCity on a lark, being on both a cyberpunk and management kick at the time. I knew going in that the learning curve would be steep, and after a few false starts I got the hang of making money and expanding my operation. As I moved my offices into a towering highrise and set my sights on rival corporations under the harsh glow of my neon billboards and blimps, I started to feel like I had divined all the secrets of the game and would soon grow bored. But this was soon followed by a realization the likes of which I have rarely had from a game, one that elevates this title to true brilliance. 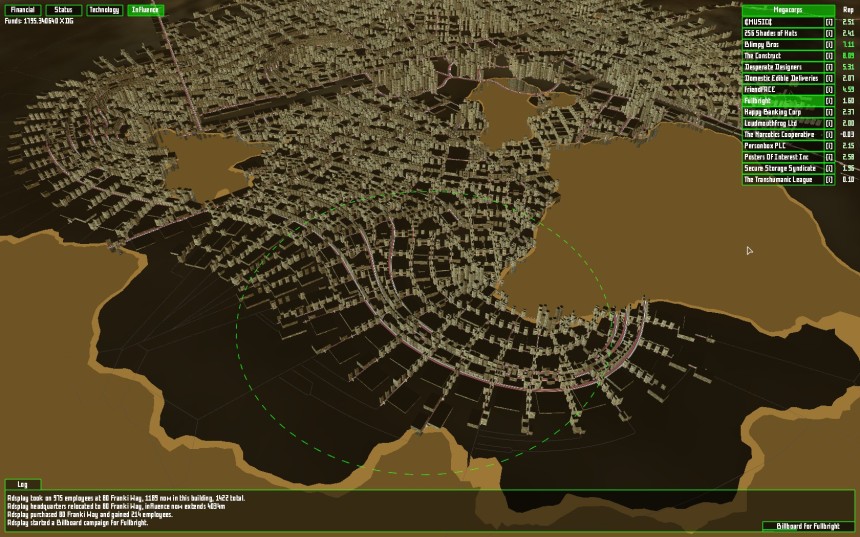 AdvertCity sets you up as the CEO and sole employee of Adsplay, a startup advertising company in a procedurally generated metropolis. Every building and resident belongs to one of a dozen or so megacorporations that run the city, and you get to make your bones by advertising for them. Starting out with stacks of fliers and a limited range of influence, you can earn new technologies like posters and billboards from friendly corps, buy new offices to expand your reach, hire employees to improve your ads, and so on. There’s also an internet view where you can post all manner of cat pictures and spam ads as well.

Each kind of ad has strengths and weaknesses depending on where in the city it is placed, in what kind of building, and for what corporation. This then becomes your chief concern, puzzling out which ads go where to earn you the most money and rep. And it’s quite a puzzle, because there’s no guide or tutorial to making a million bucks. The scant tutorial teaches you how the interface works and gets you set up with a loan and running the most basic ads for pocket change. You have to delve into the procedural descriptions of buildings, corporations, and even ad technology to understand how to ply your trade.

Making your fortune as a shameless advertising mogul is only half the game, however. Once your company becomes a major player in the city, you can set your sights on seizing control of the other corporations. This is how the game is won, by eventually absorbing all of your rivals and taking over the entire city. At first glance, this may seem like an impossible task, since you’ll be looking for something to do with your first million dollars and the smallest megacorp might cost thirty million to claim. You’ll also run into a confounding ceiling on how much money you can make from your ads, as the resources to produce them (employees) start to catch up to the profits you make.

That’s where I was when I started to cool on the game, with my sprawling company humming along and a few easy conquests down, but the remaining megacorps far out of my reach. By that point the game had started to feel like a more interactive clicker game, with me just spamming my most expensive ads over and over for the biggest returns, still not enough to topple my foes. I was beginning to think there was no real strategy to the game, just a long grind up to enormous cash totals again and again. And it turns out I was very, very wrong.

In my quest for the fattest bank account, I started running nothing but colossal blimp ads as quickly as I could for one particular megacorp. I was earning plenty of rep with them and money, but not nearly enough to buy them out. I started to notice that the campaigns themselves were going poorly and the megacorp disliked them, even though they were paying me for them. I stopped the campaigns once my income peaked, and on a lark I took a look at the megacorp’s info. What had once been a company valued in the tens of millions was now worth a measly half a mil and falling.

That’s when it hit me: I was running an ad agency. I could help grow companies with good ads, or I could run them into the ground with bad ones. All that effort I made in the early game to learn what worked and what didn’t could now be turned around to destroy the very companies that had helped me grow. The economy in AdvertCity was far, far more detailed and complex than I gave it credit for, and provided a wealth of strategies for hostile takeovers. I could tank a company’s profits with poor ads, boost their competitors with good ones, buy out their buildings to starve them of employees, or drain their bank accounts by running an endless stream of extravagant ads for them.

It’s a brilliant strategy game hidden beneath a rough, if stylish, exterior. The graphics are simple polygons and wireframe menus but fit the cyberpunk feel to a T, and the heavy, oppressive soundtrack is the icing on the dystopian cake. The interface can sadly be a pain to deal with, sometimes letting you double-click through to the wrong options or stack up notifications to obscure important info. Performance can also suffer once your operation gets enormous, and I had one audio mishap that forced a restart the first time I went bankrupt. These are all minor issues around a far more major one, the learning curve. If you want to reach the genius buried in this game, you have to work for it. You have to take the time to read, experiment, fail, and try again until it clicks, and you have to do that at every stage of the game. It won’t be for everyone, but those who do delve deep into AdvertCity will discover one of the most clever and rewarding strategy games I’ve ever played.