I can’t be the only person who’s gotten a pirate ship or spaceship and spent all their time hauling junk around to sell. There’s something quietly gratifying about buying low and selling high, and so there should be no surprise there are games that exist to scratch that itch. Port Royale 2 does just that on the surface, and then surprises you with several more layers of fortune-seeking options.

You play an aspiring merchant in the Caribbean of the 1600s, starting with little more than a sloop and some sacks of money. Your ship will get you around to the many ports, each modeled in simple, charming Stronghold-esque 2D. The buildings that comprise each town determine what goods they produce from a list of about two dozen, and the rate at which they consume them. Your job, then, is to learn which towns need which goods, and where the best place to buy them up is. 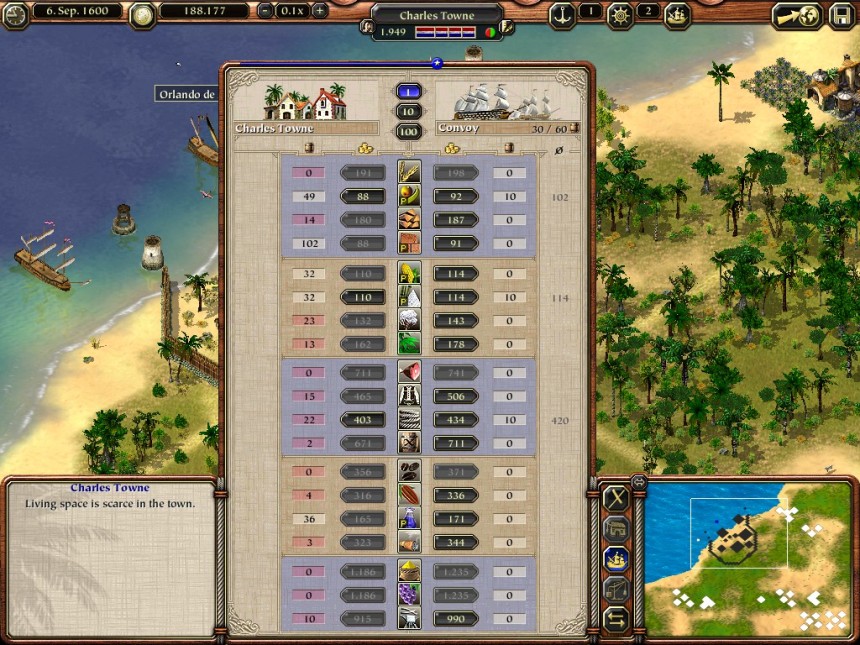 It’s not as simple as finding a town that makes shirts and a town that grows cotton, though. Each location is constantly producing and consuming goods, and their prices are determined by dynamic supply and demand. So, if you bring a huge load of cotton to shirt town you might make a pile of money, but turn around and do it again and that cotton might be worthless because they haven’t used up the first load yet. Success in the mercantile business means making circuits around the sea, picking up whatever you can at bargain-basement prices and unloading it at whatever port happens to need it. The world map helpfully displays what good a town needs the most at the time, but there are plenty of other traders who can beat you to the punch.

The dynamic, living world of Port Royale is what keeps it fresh and entertaining, because not only will demand flip on you, you can be the agent of that change. Strike enough deals in a town and they’ll grant you building permits to set up your own farms and workshops, allowing you to add new production sources across the map. With enough capital you can move away from buying and selling random goods and instead working your own supply chains for pure profit. You can have enormous merchant fleets at your disposal, moving around huge loads of goods or broken up across the Caribbean to beat the other traders to the punch.

Somehow the developers didn’t think that was enough, so if you want to eschew the merchant life for full privateering, even that’s an option. Any ship can be designated a warship and outfitted with cannon and sailors to take on pirates or merchants of other nations, or even besiege and ransack ports. Governors in major towns will even give you missions to eliminate particularly troublesome captains if you need guidance. There’s real-time combat between ships that’s functional but basic compared to other high-seas simulators, and comes with the odd handicap of letting you command one ship at a time while your opponents have their full fleet.

Still, the combat is an engaging and welcome addition atop the robust economic simulator, and it isn’t even the only one. You can also choose to ferry around settlers and construction materials to help grow towns, gamble in the many taverns of the world, piece together treasure maps, and more. A series of four extensive tutorial scenarios will help you get a grip on the game, and then you have four challenge scenarios or the wide-open freeplay mode to enjoy. The chunky 2D graphics might not have aged very well but they certainly don’t detract from the relaxed atmosphere, and the soundtrack is exactly what you’d want in a low-key trading sim. Anyone with even a passing interest in being a high-seas merchant is sure to find something to enjoy here.