What in the world happened here? The original Cities in Motion was a chill little sim that let you fill city streets with buses and trams with just a few clicks. CiM 2 certainly looked like that on the surface, but after just two hours with it I can hardly believe it’s from the same developers. I really can’t imagine a game that missed the point of its predecessor worse than this one.

Cities in Motion 2 places you in charge of a transit company, challenging you to provide public transportation to a bustling city. Starting from scratch, you place stops for buses and trolleys, lay rails for trams and metros, map out routes for your vehicles, and even select the models of vehicle to use. These basic elements allow you to provide service to the many different people of the city, just as the first game did. CiM 2 goes a bit further, though, giving you control of timetables, charging you with building depots for your fleets, and even granting you the power to lay new roads within the growing city. 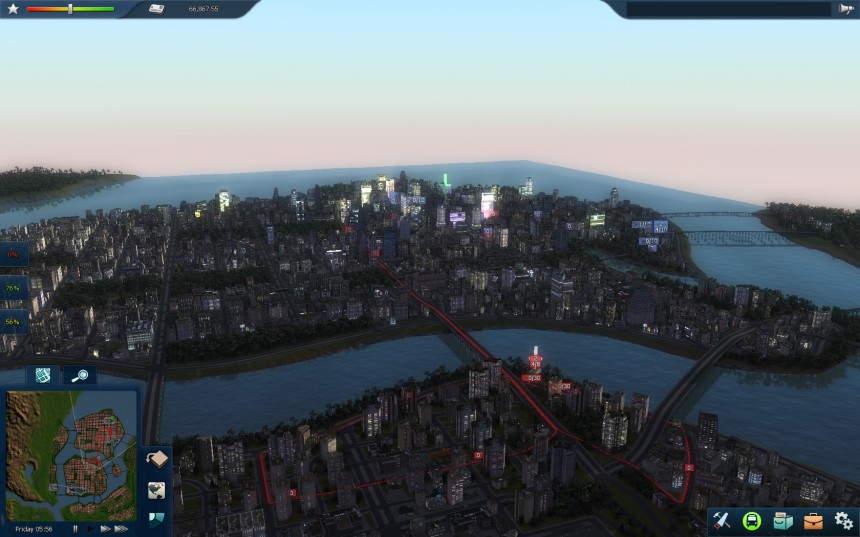 Now, when I say “growing” city, that isn’t just flowery language. One of the much-touted improvements of this title over the previous is that the cities grow with you. Supposedly your services can influence the growth of the city, and laying your own roads can change the flow of traffic. It’s an element of SimCity that feels oddly out of place here, especially after learning to cope with the set traffic patterns of the first game. Similarly the growth mechanic sounds good on paper but has very little obvious effect even after several hours of play.

This leads to the core problem with CiM 2, in fact, because it turns out that none of the new additions to the gameplay are actual improvements. The new control options over your company like timetables and service zones make the game more complex without providing any real benefit. It’s just another lever you have to get in the right position, and it’s not at all obvious how to best set it. Placing depots is another unnecessary distraction, forcing you to put detours in your lines and cram large buildings into the landscape for no actual benefit. And building your own roads can lead to endless frustration because of how touchy the building tool is. 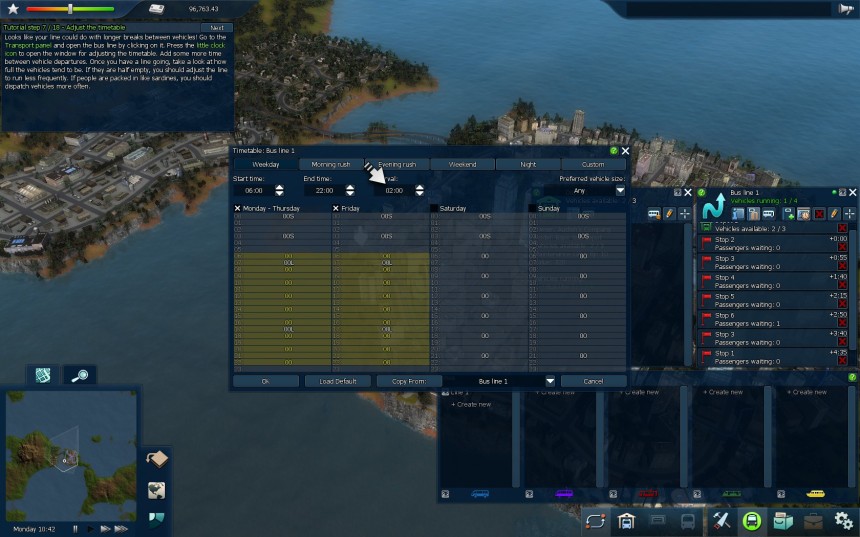 I need to spend some extra time on the interface now that I’ve mentioned it because it is a dumpster fire of issues, especially compared to the clean and simple UI of the first game. Building ANYTHING in this new 3D engine is guaranteed to drive you up the wall as it snaps to the wrong spots or jumps over where you want it or simply fails to connect. For one example, trolley and tram lines can be laid in any lane of any road, and also in medians if available. They have to follow the direction of traffic and must be laid by individual road section, so you have to zoom all the way in and make sure your lines are following the right lanes every step of the way. And if you misclick and need to delete a section of track, half the time you’ll misclick again and delete the entire road.

Metro tracks became the bane of my existence because of how impossible they are to use. They can’t be placed on roads or near buildings, and you have to manually raise and lower them to get them underground or over rivers. Curves that are too tight will break the rails, and rail sections that don’t line up perfectly won’t connect. The main problem is that the game will happily let you build track that’s too steep or too curved for your purposes and then not fully explain why it won’t work. Just getting a depot connected to a metro line requires you to manually lay out an entire train yard, usually in far too limited a space.

I could go on, so I will. The menus and windows are cramped and difficult to parse. Your charts provide less useful information than the excellent data views of the previous game. Advertising options have been removed for some inexplicable reason. Missions don’t properly explain your goals, and this is a big one because the first scenario of the game challenges you to provide 15% coverage of the city, but no matter how much I built and how many people I moved, my progress never rose above 0%. And somehow on top of all this, the game is just harder. After two hours with the very first scenario I couldn’t make a single dollar of profit. None of the dozen lines I built, of all shapes and sizes and makeups, would carry more than single-digits of passengers.

Everything I loved about Cities in Motion is absent from its sequel. The charm, the accessibility, the convenience, the polish… none of that is to be found here. Somehow it’s been replaced with tiresome micro-management, an impossibly bad building interface, vague or non-existent feedback, and the worst part of any sim, trying to cram things into places they won’t fit. I seriously can’t think of anything positive to say about this one, so I suppose I’ll just let my overwhelming disappointment speak for itself.