I don’t mind complexity in my games but it has to serve a purpose. In a first person shooter you wouldn’t want to load a magazine bullet by bullet and release the slide every time you reload your pistol, but it works in Receiver because the whole game is built around the detailed functions of your firearm. Plenty of city-builders have complex systems like detailed citizen needs or production chains, but most pull back from having too many at once. Cultures does no such thing, piling on every possible system and consideration until you are running every facet of every resident’s life. And if that somehow sounds like fun to you, well, read on.

Cultures – Northland puts you in charge of a band of plucky settlers in a cartoonish approximation of Middle Ages Europe. Each scenario in the lengthy campaign is heavily story-driven but at the heart of each you’ll need to establish a thriving village and a standing army. You do this by gathering natural resources like wood and stone, using them to build workshops to refine them into more complex materials, and work your way up the enormous chain of upgrades and structures. Your settlements will sprawl like few others, with dozens of workshops ringed by a sea of dwellings and fortifications. It’s quite a pleasure to watch your little folks putter along in their daily lives once you’re established, moving goods and chatting with each other. 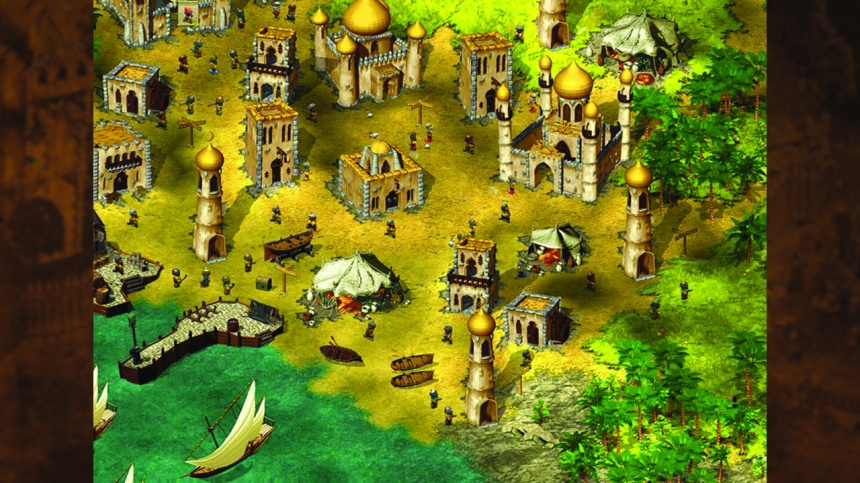 Getting established is the hard part, and it’s mainly because of the depth afforded to your citizens. Every single inhabitant of your settlement is like a tiny RPG character, with meters for needs like hunger, sleep, and even socializing. They’ll duck away from their duties to resolve these needs, so you’ll need to keep their homes and food sources nearby. They also gain experience in the dozen plus different professions as they work, which is key to progressing because you can’t staff the higher-level buildings until your workers in that profession level up as well. And if that wasn’t enough, they also have equipment and inventories, along with special settings specific to their job like what kind of goods to make or which trading posts to visit.

Pressing spacebar with a citizen selected opens a menu with over a dozen different commands to issue them. Some of these aren’t even necessary as the game uses context-sensitive right clicks (and in fact only issues orders with right-click, which threw me off when trying to build), while others are essential. You move your people around as you would in a proper real-time strategy game, except the pathfinding is atrocious, sending them on longcuts through dense forests instead of along the straight roads. This might be purposeful because your scouts can build signposts to mark paths, but this option is hidden among a dozen others in that tiny, cluttered spacebar menu.

The simple fact is that it will take you an inordinate amount of time and effort to do anything in Cultures, and you’ll be required to do all that and more in each scenario. I haven’t even touched on combat, or trading, or vehicles, or the religion system, after all. A game this deep and complex needs solid tutorials, but I could only get about half of them to even work. I did manage to extract the basics of orders, building, and combat so armed with that knowledge I started the campaign. The very first scenario has you defending a village under attack, using hero units that will earn you a game over if they die.

I don’t think Cultures – Northland is a bad game necessarily, but it’s not one I could ever recommend to anyone. The bewildering level of complexity formed from the crossing of so many disparate systems makes the audience for this game too tiny to even identify. It feels like a game from a completely different time, the kind you had to be there for at release and willing to devote weeks and months to playing. Well, times have changed and when I sit down to build a city or raise an army, I don’t want to have to equip my people or put them down for naps. I mean, I already have two kids of my own.