How many ways are there to kill zombies now? A lot more than there needs to be, that’s for sure. I was socially inept enough to jump on the zombie bandwagon before it was cool, back before 28 Days Later and the Zombie Survival Guide brought them back from their long post-Thriller twilight. I’ve cooled on them enough that zombies as a bullet point is more likely to drive me away from a game, so keep that in mind while I explain just how much I enjoy Zombie Driver HD.

The main draw of Zombie Driver is the story mode, posing you as a nameless motorist in a city beset by the undead plague. Every mission takes place on the same wide-open GTA-style map, sending you to different areas to rescue survivors, destroy zombie strongholds, or defeat enormous bosses. Ramming is sufficient to splatter most zombies but for bigger targets there are weapon pickups scattered all over, giving you machine guns or flamethrowers to cull the hordes with. You’ll also find repair pickups (which you will need because damage can come in huge bursts) and money, used between missions to upgrade your cars. And that is cars plural, because you unlock sports cars and limos and police cruisers over the course of the campaign. There’s not a lot of variety in the missions and the characters are all voiced so badly it’s funny, but they make simple excuses to run over thousands of zombies.

The driving really is the best part of the game, appropriate for a game called Zombie Driver. Your vehicles are different degrees of responsive but all are fast and all make satisfying messes out of the undead. You’ll fight different kinds of zombies including dogs and giant exploders and worse, and they all erupt into fountains of giblets and leave crimson streaks on the pavement. It’s a viscerally satisfying game, even if the sound effects aren’t always up to the task of capturing the slaughter. Weapons do tons of damage and clear out crowds, and you get mounting monetary bonuses for long streaks of carnage. Much like in Carmaggeddon, It’s easy to lose track of mission objectives just because you’re having so much fun roadkilling things. 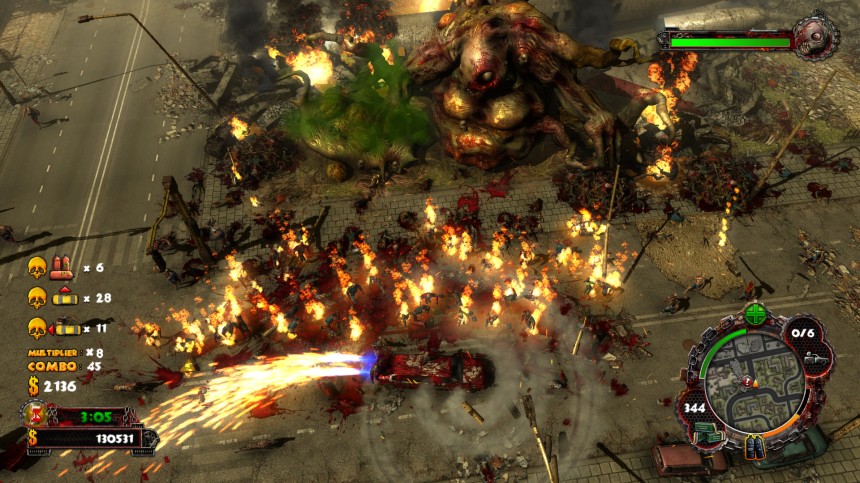 The HD in the title does indeed mean this is a remaster of a previous Zombie Driver, but with more going for it than just prettier graphics. The campaign is longer, with a full 31 missions and several new bosses to battle. There are new vehicles as well, which can also be used in the game’s Blood Race and Slaughter modes. Blood Race is, again, much like Carmaggeddon where you race against other cars, crushing zombies and blowing up your opponents to progress. Slaughter is you against mounting waves of zombies with its own progression system of weapons and upgrades. You’ll find plenty to keep you busy as long as you enjoy plowing through zombies, and when it’s done this well there’s really no reason not to.