Mutant Mudds is an odd throwback platformer, in that it doesn’t throw back to any one particular game. You can trace Shovel Knight back to a few NES titles, and Freedom Planet is Sonic with the serial number filed off, but this one is its own little homage to classic gaming. While it doesn’t break any new ground, it hits all the traditional platforming notes well enough to stand on its own, at least for a time. 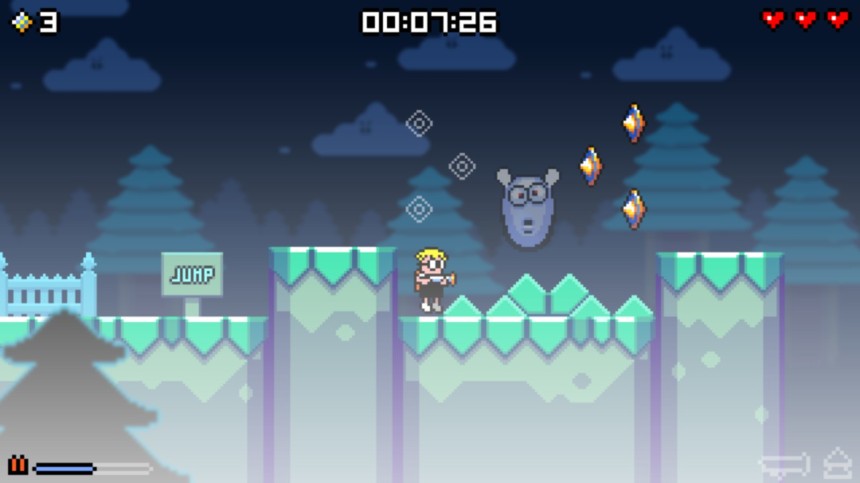 Your character is some pixelly little nerd living with his grandma. A gaggle of space mud creatures attack, leaving your geek avatar to take the fight to them by collecting diamond things and squirting them with water. The controls are as simple as they get; you can shoot, you can jump, and you can hover briefly by pressing jump again. If there’s a way to hook up an NES controller to a computer, it would be all you need to play this game. The levels are equally simple, featuring spike pits, moving platforms, vanishing platforms, and goopy enemies to clear out before making your next leap. There’s one additional gimmick, portals that send you to the background or foreground, but outside of those it’s a very straightforward design.

If that was it, Mutant Mudds wouldn’t be worth delving into. But the creators smartly took that simple foundation and went deeper with the content. Within each of the game’s 16 levels are 100 diamonds to find, which unlock upgrades for your gun, jetpack, and jumps when you find enough. Completing the four levels that comprise a world then unlocks an additional stage to tackle. Each level also contains two secret stages, one fairly easy to find and one requiring certain upgrades to reach. These secret stages kick up the difficulty pretty hard over the base game, some of them taking me dozens of tries to complete. And then there are ghost versions of the base levels, with new hazards and invulnerable enemies.

You’ll find more than enough platforming here to keep you busy, and the challenge forms an even spread between easy and nigh impossible. There’s no sprinting and your hovering is limited, so navigating the levels is a slower, more deliberate affair than in Mario or Sonic. You’ll encounter plenty of tiny platforms and tight jumps, but the pace makes them not all that stressful to tackle. The margins on moving and disappearing platforms are pretty tight as well, which can be frustrating until you come to grips with the pace of the game. Once you get to harrowing combinations of hazards in the secret levels, you may very well reach you limit.

The only other threat to your enjoyment is how basic the entire package is. Solid (if plodding) platforming is all well and good, especially expanded upon as it is with the secret levels and upgrades. But platformers are a crowded lot and have come a long way from the well-worn fundamentals that Mutant Mudds is built upon. It’s the very essence of a game that’s just good enough, one that does just enough to warrant a look but little more to keep you coming back. I enjoyed my time hopping about and bloop-blooping water bubbles at monsters, but the moment I moved on I never found the urge to look back.

Regardless of your skill level, Mutant Mudds has plenty of simple, if basic, platforming to offer. It occupies an odd place in retro gaming, not fully 8-bit or 16-bit in its stylings, but a unique blend that still manages to feel natural and approachable. The volume of levels to explore and secrets to find help give it some staying power so long as you’re satisfied with the limited gameplay offered therein. It’s far from an essential of the genre but it’s a fine example of platforming fundamentals, and in that does enough to please me.