I can still remember the birthday I got Zelda II: The Adventure of Link. Being a huge fan of the original, I was so excited to dig into the sequel despite knowing nothing about it. For years it was one of my biggest NES disappointments, being too hard and too confusing for my elementary-aged self. I’ve learned to appreciate it in the intervening years, as well as similar games from the era like Simon’s Quest and The Battle of Olympus. I only bring this up because Elliot Quest has done an amazing job of refreshing all those memories, good and bad alike.

You play Elliot, a terminally ill youth on a quest to maybe save himself through divine intervention. There’s a pretty rich and developed world to explore that contains four guardians that might have the key to saving Elliot’s life, and it’s your job to guide him through those forgotten places, and the cliffs and caves that lead to them, mostly unscathed. The world map is huge, with tons of locations of interest, side areas, secret areas, and even enemy encounters.

Elliot’s default weapon is a bow that fires in an arc, but you gain experience from enemies that can be used to upgrade your attack (and movement and health and magic) that can make it fire faster or straighter. You’ll also pick up magic spells, items like bombs and potions, and abilities like double jumps from the many locales you visit. Almost every single area has alternate paths and secrets accessible only with the right powers, so you’ll have plenty of reasons to revisit parts of the world.

There are SO many paths and secrets, in fact, that it can often be hard to tell where you’re supposed to go next. My main complaint about Elliot and his Quest is the difficulty, and it’s a two-fold issue. The game dumps you in a wide-open world with a fairly clear path to the first temple, but after that there are tons of caves and forts and forests and cliffs that may or may not be the path ahead. You’ll need to be very familiar with your abilities to know how to proceed, and many of them are creative enough to make that difficult. Your reward from the first major area, for example, is unlike most powers found in platformers and takes a good bit of experimentation to understand.

Even if you know where you’re going, though, there’s no guarantee you can get there alive. Elliot Quest can be very difficult at times, with a major spike around the second temple that came as a shock to me. Some enemies are posed in ways that make them almost impossible to avoid, and invincible enemies start appearing with more and more frequency the further in you get. Checkpoints are plentiful but you lose XP every time you die, a particularly brutal punishment considering how challenging some sequences can be. After a few hours my problem wasn’t so much where to go, as my options being almost too difficult to face. 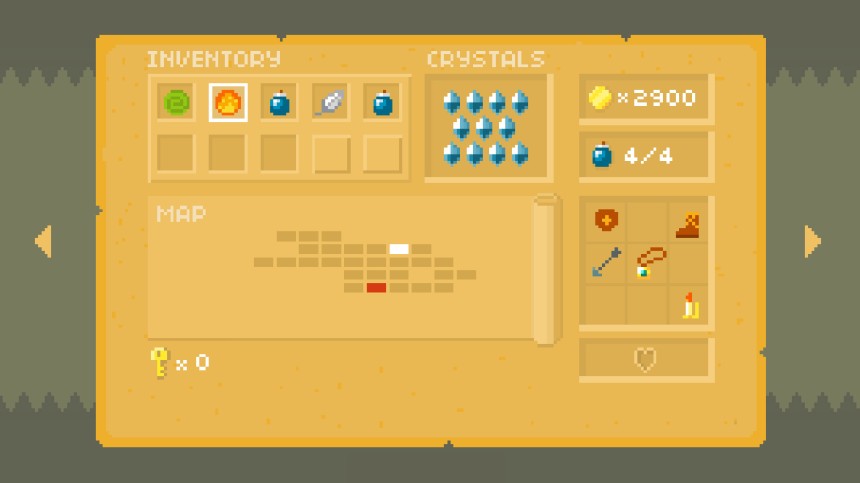 It’s pretty remarkable how faithfully Elliot Quest follows in The Adventure of Link’s footsteps, down to the confounding levels and difficulty spikes. They’re both games that demand a lot of time and attention to appreciate, but are undeniably worth it in the end. Elliot Quest has an absurd amount of secrets and side content to uncover, all presented in charming pixel graphics and pleasing ambiance. If you like your retro platformers challenging and engrossing, you’ll get all that and then some here.