I was unaware that Downwell had any competition in the “low-res roguelike platform descent” genre until my friend put me onto Probability 0. I honestly don’t think Downwell needs any competition, but it is always nice to see new spins on ideas. The presentation of Probability 0 makes most of the case for its existence, and the unique challenges of the descent and your powers round out this clever offering. It’s not quite as gripping as its competitors, but it certainly has a place. 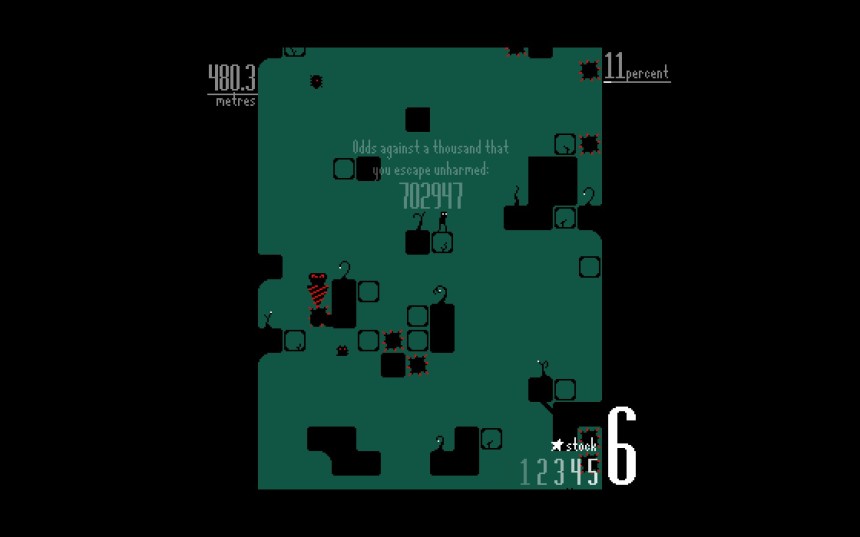 There’s less of a setup and more of a high-concept motif here, with your silhouetted pixel man descending into a never-ending pit of darkness and battling strange monsters along the way. You start out only punching and slinging stars downward, but defeating enemies levels you up and allows you to select from dozens of new abilities across several tiers. There’s space for some actual builds here, such as ones heavy on punching, or stars, or defense, or contact damage, and so on.

Despite the advancement options, there’s not much variety of gameplay to use them on. You’ll encounter more and stranger monsters the further down you go but the basic structure of the pit doesn’t change from assortments of blocks and spikes. It’s not necessarily a bad thing, it just strays closer to an infinite runner than, well, Downwell. The fixed scrolling also means your pace is mostly dictated by the game, making Probability 0 feel the more measured and technical of the two.

The title refers to the game’s most unique aspect, the probabilities that constantly flash across the upper center of the screen. This is essentially your health, as the random probabilities decrease as you get hit, from six digits all the way down to singles. It’s a clever touch that really supports the surreal, striking feel of the game you get from the stark graphics and steady, low-fi soundtrack. There’s two difficulties to tackle plus a mode where you can get a head-start based on your previous records, but again, not a lot of variety between runs aside from your builds. As long as you’re okay with that, though, there’s a pretty good chance you’ll enjoy this one.