This was one of those games that I never really paid much mind to while others were raving about it. Some games just pass me by in the moment, like Pokemon when I was a kid or Halo when I was in college. I don’t remember how I ended up with One Finger Death Punch but the moment I got it, I was addicted to it. If it took me more than 30 seconds to decide on what game to play for the night, I fired it up. If I had 5 minutes before I had to go somewhere, I fired it up. It took nearly a dozen hours for the novelty to wear off enough for me to look at other action games, which is not something I can say for many other titles. 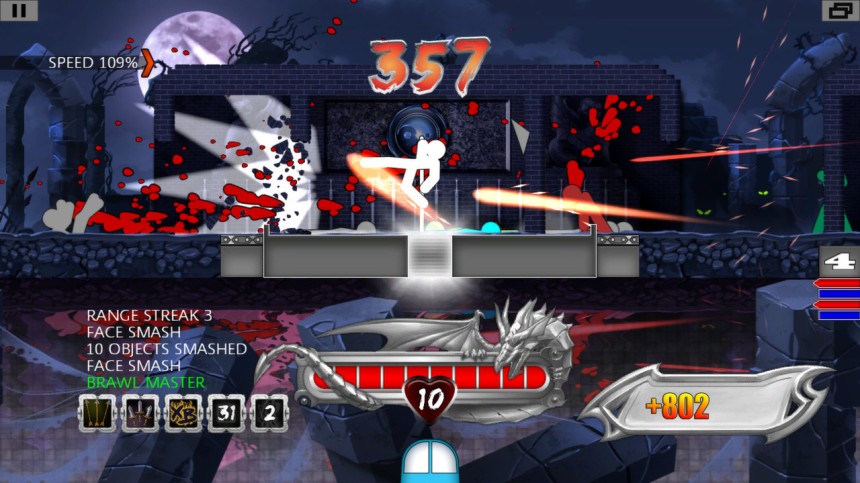 One Finger Death Punch is a two-button fighting game, pitting your kung fu stick guy against hordes of other stick guys. Playable with mouse or controller, your left button attacks to the left, and your right button attacks to the right. That’s it. There’s no movement, no jumping, no button combos, just two attacks. The trick is that enemies must be close enough to hit when you push the button, otherwise you whiff and leave yourself momentarily open to get hit. With hundreds of marauding stickmen bearing down with you, some requiring multiple hits or juking on you, brawls can get frantic real fast.

The beauty of OFDP is how it plays out your simple button presses. Each attack is animated in a different way, forming a ballet of murderous moves when the enemies pack in around you. There are tons of special attacks that come up as the right circumstances are met, such as power-smashing foes through walls, pinning them with knives or arrows stolen from attackers, or impaling your hapless opponent on a fallen weapon. Weapons and passive special abilities can increase your range or set up free combos on groups of enemies, so you’ll always be looking for those key openings. The pace of the game is exhilarating, and once you learn to keep up with it every level becomes a whirlwind of broken spines and flying bodies. It’s like a rhythm game where every beat kills a person.

Battles can take a minute or less, so the developers smartly included hundreds upon hundreds of levels and modes to enjoy. The main game has a world map with hundreds of stages across multiple paths, including time attacks, survival rounds, weapon stages using nunchakus and not-lightsabers, boss battles, and sepia-toned retro film battles. Some paths unlock new passive skills as well, such as longer weapon durations and free hits. There are three difficulties on top of that, and a host of survival modes to beat your stick head against. Of particular note is a genius difficulty system that adjusts as you play: Every time you win a battle, the game’s pace increases slightly, and when you lose it drops back down. There’s no incentive to keeping the pace high, it just keeps the game at a difficulty appropriate to you.

I really cannot stress enough how viscerally fun it is to murder hundreds of stick dudes, and the vast amount of stages and modes to murder them in makes this an ideal package. Games like One Finger Death Punch deserve special recognition for creating a simple, enjoyable gameplay concept and then giving you nigh-infinite permutations of it. If you like fast-paced action you’re sure to love this, and there’s enough to love to keep you busy for weeks on end.