I’m a huge fan of classic DOOM and Quake, the latter particularly because of its unique atmosphere of eldritch horror. Not many games capture it quite as well, but Teleglitch gives it a terrifying run for its money. Between the gritty brown surfaces, the spilled gore, and the silent uncertainty of what lurks around every corner, this title takes that otherworldly horror and mixes it with hectic action and classic roguelike tension. Creepy, intense, and challenging, this is a worthy entry in both the roguelike and survival horror genres.

Posed like a top-down version of those classic shooters already mentioned, Teleglitch sends you through branching, randomized levels in search of escape. The science colony you’re stationed on has gone completely to hell thanks to some questionable teleporter experiments (sound familiar?), leaving you as the only level-headed person alive among killer cyborgs, ravenous zombies, and worse. Along the way you’ll find and assemble an arsenal of space-age weaponry as you learn more about the fate of the colony and the bizarre anomaly consuming it.

No matter how seasoned a space marine you might be, Teleglitch will have you forever dreading what’s around the next corner. The top-down perspective is based on lines of sight, so anything not directly in view of you is blotted out by thick, sharp shadows. You start with naught but a pistol and knife, but over the course of the game you collect weapons, ammo, and other junk that can be combined into a huge assortment of gear to help you survive. The crafting system is robust, easy to navigate, and has a number of meaningful choices and secrets to work out. It’s a refreshing addition to the game, as opposed to a lot of modern crafting systems unceremoniously bolted onto their games. 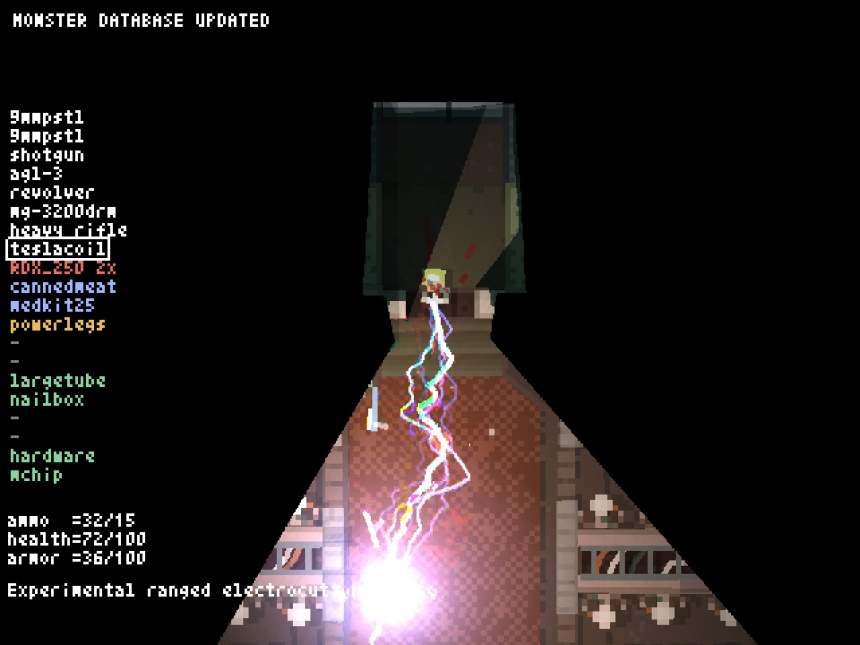 You’ll need every tool at your disposal too, because nothing in Teleglitch holds back. You’ll be facing waves of mutants, zombies, cyborgs, robots, and far more exotic things at every turn. While the first few levels pit you mostly against melee enemies, you’ll soon start running afoul of gun-wielding foes that can drop you almost as fast as you can drop them. The limited sight lines become a real terror as you creep down the derelict corridors, tensed for the next shootout. It’s one of those games that really, really makes you work to beat it, and it’s intensely satisfying when you finally pull it off.

This is one of those rare pixel art games that’s ugly as sin, but once you start counting bullets in your clip and learning how to construct quad-barreled nailguns, you won’t even notice. The minimal graphic design does do it some favors, leaving effective elements of horror to your imagination. The sound design is incredibly on point, with ominous cues and snaps of static in just the right places. And if you like the combat, they even added a series of arenas to blast your way through. There’s a lot of secrets to discover, a lot of monsters to fear, and a lot of ways to mow them down. All told, these features combine to form one of my all-time favorites on Steam, spanning the roguelike and horror genres.