I’m pretty sure every nerd from my generation wanted to be a starship captain at some point. All of us Star Wars/Star Trek/Babylon 5/LEXX fans made do with the space sims we got, but none of them quite hit the mark of ordering evasive maneuvers or intensifying forward firepower. Despite plenty of attempts at capital ship management over the years, none have captured the spirit of being a space commander like FTL. Featuring equal parts tactical combat, executive decisions, and airlocking tiny crewmembers, it’s the one captaining sim that crosses over into whatever part of sci-fi tickles your fancy. 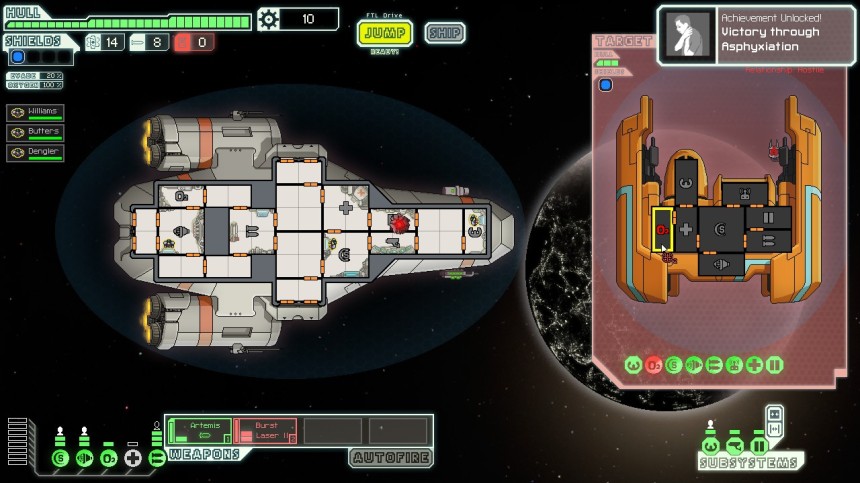 In a charming twist, you are a federation captain trying to outrun the dastardly rebellion with valuable intel on their next move. There are dozens of ships you can start with, all featuring their own armaments, crews, and gimmicks, and all needing to be unlocked through deeds in game. You then have eight sectors of space to cross without being blasted, eaten, stranded, or otherwise murdered by hopping from jump point to jump point, one step ahead of the ever-encroaching rebel fleet. Some jump points will have enemy ships to fight, some will have story encounters where you get text options, some will have merchants, and so on. There’s a remarkable amount of things to run into in FTL, so much that even 30 hours in you may be encountering things that are new to you.

A large part of that journey of discovery is going to be the enemy ships that try to kill you. There are many kinds across the different races and factions, each one randomly rolled with weapons and systems. This is where the combat system really shines, because your own weapons and systems can be targeted manually to focus on the rooms that are causing you the most problems. If they have really nasty guns, you can obliterate their weapon control. If they have teleporters to send over boarding parties, you can blast it. If they’re trying to get away, you can knock their engines out. Battles play out in real time but at a very measured pace, and you can pause freely to assess the situation and give new orders. It’s an armchair commander’s dream come true, watching the little crews scramble around their ships, fighting and putting out fires, as both vessels trade volleys. 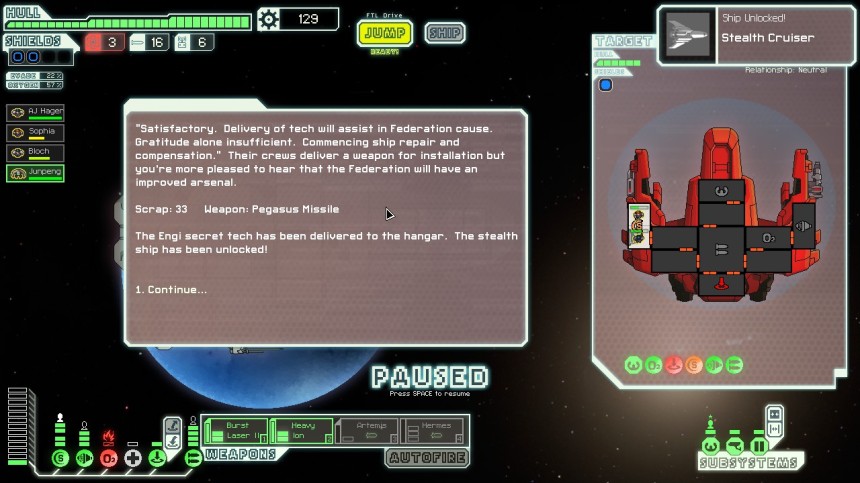 There’s a lot to learn about the game, especially after the free update it got awhile back. Your ship can be upgraded with teleporters, drones, mind control, hacking, cloning bays, and more. Currency comes in the form of scrap, and learning how to best use your scrap might be the hardest part of the game since it needs to be spread across buying new equipment, upgrading your ship, and repairing your hull. FTL is a carefully-balanced game, keeping you a hair away from cold vacuum unless you’ve really mastered its intricacies. You need to know when to retreat from battle, when upgrading doors is more important that shields, and how long your crew can hold their breath. The learning curve is steep, but if you like the gameplay, having more to learn keeps the replay value high.

Excellent, detailed pixel art and a delightfully atmospheric soundtrack round out this extremely deep package. With three difficulty levels and a bunch of unlockables and (internal) achievements to shoot for, FTL is an easy recommendation to anyone wanting a spaceship game in general. Your command over your vessel is so nuanced and gratifying that you’ll find yourself caught up in the plight of your tiny crew over and over again. Mastering the art of combat and the delicate resource balance will take time and patience, but sticking it out to become a proper captain is a fantastically rewarding experience.