I love feeling like a badass in video games, especially since I am very much not one in real life. “Badass” covers a lot of ground, though, running the full range from nailing a tricky level in Super Meat Boy to slo-mo capping a room full of soldiers in F.E.A.R. or Max Payne. What makes Super House of Dead Ninjas so enthralling is how it hits so many of those badass sweet spots, allowing you to pull of wild high-speed maneuvers while mulching hordes of baddies. Not only that, it does it in a rich, clean package that’s full of tantalizing secrets and even does SNES nostalgia right.

You’re a ninja, there’s a giant tower of evil, time to kill things. Armed with your sword, shurikens, bombs, and screen-clearing ninja magic, killing things comes fast and hard. Floors of the tower are mostly empty hallways to dash down with a demonic foe or two occupying them, and though the enemies are incredibly varied in how they attack you can reduce all of them to a fine mist with only a strike or two. Your downward attack in particular turns you into a whirling dervish of murder, and there’s really no reason not to lightspeed cartwheel cuisinart through everything in your way. Speedy, bloody kills also build your Rage meter, which makes you invulnerable and even more lethal as long as you can maintain it.

Though we’re talking hundreds upon hundreds of randomly-generated floors, they pass in such a flash that even a good run only takes 10 minutes or so. Every 150 floors there’s a boss, but they all have fairly simple patterns you can master after only a few encounters. There’s not a ton of variety to the actual murderous descent, but the combination of random floors, random enemy layouts, and murderunning as fast as possible makes for a lot of hectic encounters. Anyone can have a good time julienning foes but to get good at Dead Ninja Storage means thinking on your feet and having the reflexes to respond to anything. 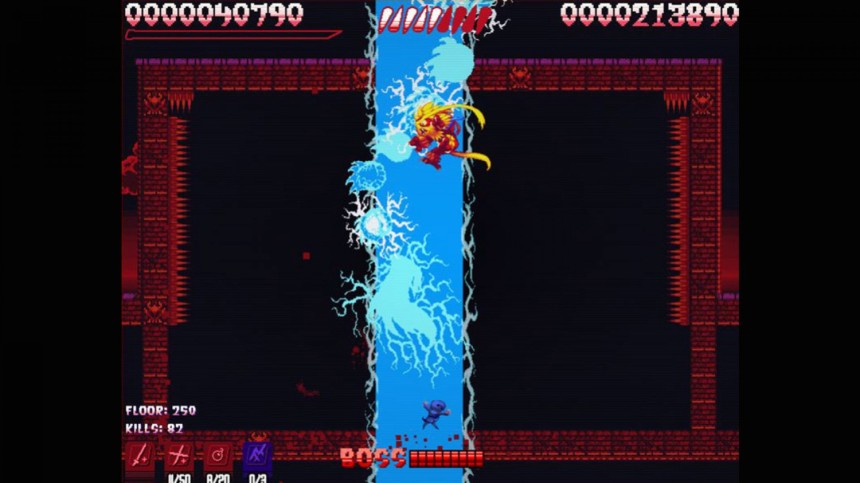 There’s a load of secrets tucked away in those same halls, too. Everything from mysterious letters to hidden fairies to cryptic ghosts are there to be uncovered and help you build your impressive arsenal. It really is impressive, spanning katanas, scythes, shuriken, whips, bombs, ninja magic, and more. All your goodies are unlocked by reaching various milestones and achievements, which is a sure-fire way to get people to keep coming back for another run. You also have three difficulty levels and multiple challenge modes once you really start to master the game, because they will delight in kicking your ass.

All of this is presented in a shockingly faithful Super Nintendo graphical style, right down to the logo design. The audio is definitely not limited to 16 bits, but the sinister narrator and elaborate sound effects do wonders for the dark, Ninja Gaiden-lite aesthetic. Super House of Dead Ninjas really is just a treat from towering top to bloody bottom, giving you tons of enemies to splatter in tons of entertaining ways. If you like platformers at all it’s a good pick, and if you like feeling like a sword-swinging avatar of death, it’s a great one.