I was really into art as a child, but my interest in it faded as I came up against the limits of my talents. Shapes came naturally to me, while colors very much did not. Langoth feels like a game crafted by someone untalented with colors OR shapes, someone lacking the most basic understanding of palettes or lighting or level design. There’s an alarming lack of artistry in a game that appears to hinge heavily on it, enough to put me off after a scant sixteen minutes of floaty platforming and confusing roaming.

The store page is quick to inform you that Langoth is old English for the feeling you get when you experience paradise and then lose it. I also remember the last time I had Krispy Kreme but this isn’t about donuts, it’s about a digital world that’s been corrupted and set to be rebooted. That’s bad, I guess, because you play one of two tribal TRON rejects out to restore the integrity of the code and save your awkwardly-designed world from maybe becoming a better game. None of this actually comes out in the gameplay, mind you, so feel free to make up your own story to go along with the inexplicable tasks ahead of you.

An opening animation shows your character (Adam or Eve, identical save for massive melting breasts) taking some kind of prism within themselves and making it glow green. Then it points you at a giant locked door. Once given control you’re free to scamper about the grounds, picking up purple gems and scads of bombs, avoiding or killing glowing shapes that serve as monsters, and finding glowy green fountains that somehow unlock the big doors. You’ll need to do some basic platforming across the plain geometric shapes sprouting from the garish desert, sometime dodging swinging instant-kill hammers or hopping across spinning platters. Your jump is extremely floaty, and paired with the swooping camera it can be hard to aim in the right places. 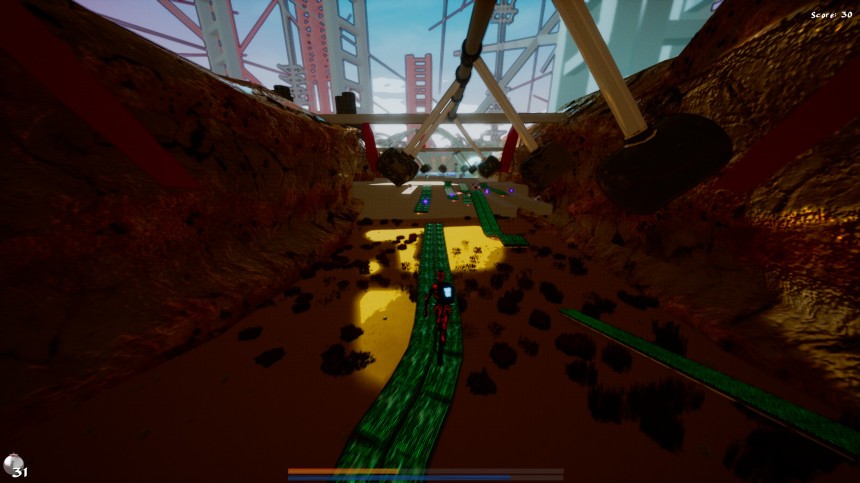 If you’re looking for a point in all this, you’re not going to find it. Langoth’s first mistake is explaining absolutely nothing about the gameplay, either through tutorial messages or clever level design. It seemed to me that I needed to find the green fountains to open the doors, and that worked for the first few areas. But then I climbed across some spinning platforms to reach one and it did nothing. I couldn’t find anything in the area to open that particular door, though I’ll be the first to admit I didn’t look very hard. And that’s the second mistake, giving the player no compelling reason to forge ahead. I don’t know what I’m opening doors for, but the areas I saw were unappealing enough to discourage me from finding any more. The enemies are geometric shapes you kill by touching or pooping bombs on, the purple gems have no discernible purpose, and there are no story hooks at all to inspire exploration.

There are more than enough games on Steam that don’t aspire to much but still manage to create simple, compelling gameplay loops to offer. Langoth can’t even clear that bar, offering only a jumbled, ugly world full of unexplained gewgaws to collect on your way to somewhere else. If I’m reading the achievements right there are only three levels in the entire game, so I doubt I’m missing out on much of a journey to begin with. The achievements also say that 2.7% of owners have even loaded the game, and I can say with certainty that the other 97.3% aren’t missing out on anything at all. 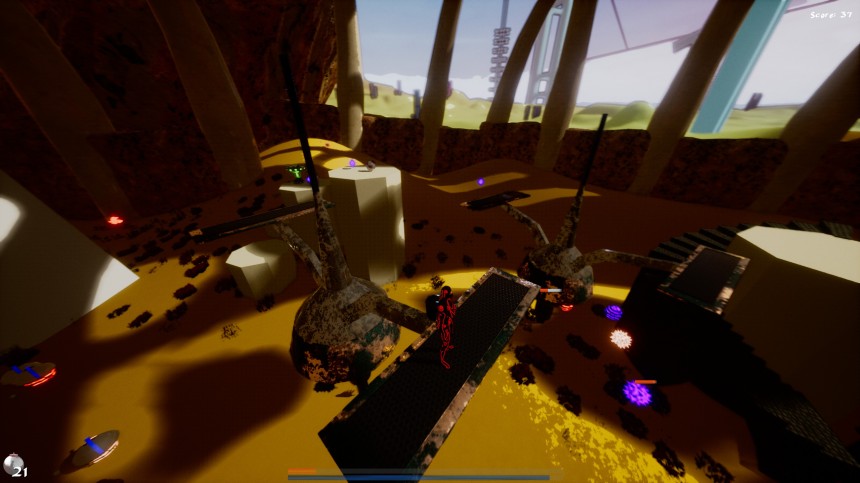