Review: Left in the Dark: No One on Board

A lot of hidden object games play at horror to hold their player’s attention, throwing up spooky faces behind windows or jamming items to find in skeletons. Left in the Dark leans harder on these tropes than most, electing to base its plot around a mysterious slasher villain and a derelict ship full of his victims. It feels like a premise that’s hard to foul up (at least by hidden object standards) but that’s one challenge accepted and slam-dunked here by a distant, poorly-defined plot. Despite the persistent efforts to startle, I found the hardest part of this one to be staying awake.

You play an unnamed detective (which should be your first red flag) summoned to Port Providence over the appearance of said derelict ship. The vessel went missing years ago and has suddenly reappeared with nary a sign of its crew or cargo. Once aboard you find your nameless self at the disinterested whims of a hooded killer brandishing a meat hook. Solving the mystery of the ship and the killer will take you from the bowels of the boat to a distant deserted island, collecting dubious junk and solving simple puzzles along the way.

Do I sound a little down on the game? In retrospect it seems hard to pick out parts that were really worth any sort of attention. Design-wise the game follows the template of so many other hidden object games, with a network of scenes to traverse and click for inventory items, HOG scenes to click for more items, and roadblocks to use those items on to pass. The HOG scenes are a good encapsulation of what you’re getting in this game, as they task you to find 12 items with no gimmicks and can be passed almost entirely through random clicking. This is no exaggeration, out-of-place objects are obvious and few enough in number to just click on one at a time until you clear the scene. There’s an achievement for solving a HOG scene in under a minute, and I think I fulfilled that requirement with every single one.

Don’t expect the puzzles to do much for you, either. All you’re getting here are the tired old rotating ring picture and swapping fuses and such. I’ve seen plenty of neat gimmicks in HOGs at this point and Left in the Dark doesn’t borrow any of them, placing it much closer to your average budget offering than what Artifex Mundi normally puts out. That just leaves the story to carry your clicking, and that’s probably the worst part of the game right there. Aside from some sparse notes about an old family and a tragic fire, you’re not going to get any kind of explanation about the ghost ship or its shrouded killer. The various parts of the mystery don’t actually seem to be connected at all, and the big killer reveal at the end basically has to explain why you would even care about who it is. They don’t even make much of a case for it, either.

The graphics are certainly adequate for a game of this caliber, featuring enough detail and color to keep me from ever missing anything of note. The sound is fine as well, aside from the normally awkward voice acting. So that’s about as far as you can get with this one, an adequate hidden object game that doesn’t do a single thing to excel in any way. It’s not bad, certainly not as bad as some HOGs I’ve downvoted, but in a field as crowded as this one being just OK really isn’t OK. Left in the Dark is one of those better-than-nothing HOGs, the kind you only resort to once you’ve played everything else. That’s about as nice as I can be to a game that nearly put me to sleep more than once. 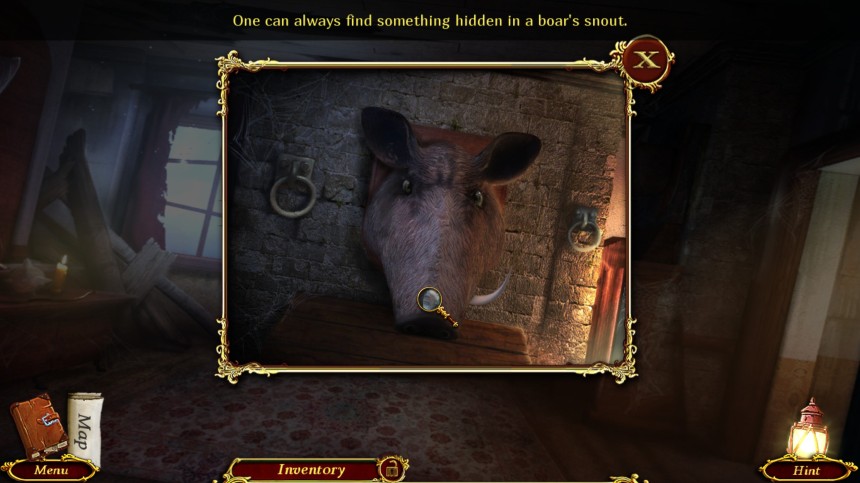