Horror adventures tend to have you investigating some horror like a ghost, not casting you as an investigating ghost. Goetia bucks that trend in a big way by giving you control of a plucky little ball of protoplasm in search of answers. They won’t come easily though, and in fact turning them up may be too great a challenge for many players. A lot of this is down to how the puzzles are designed, clever though they may be, making a pretty steep barrier to entry to an otherwise casual and creepy game. Still, the other elements work well enough to make this little ghost tale one worth seeing.

You’re dead, that much should be evident from the dreary grave you start in and the incorporeal form that follows your mouse cursor along. Your ethereal charge was a young girl before her demise, and your adventures together are mainly concerned with why she hasn’t passed on to the great beyond. Her family features heavily in this mystery, and as you explore their manor and its surroundings you begin to uncover a plot of diabolical portend. I won’t go into any more detail than that because some of the encounters are fine surprises, but there’s plenty of supernatural machinations to delve into here.

This setup is perfect for the point-and-click genre, since your ghostly friend always hovers around your mouse. You can move freely around the screen this way, unimpeded by walls or structures, and fly on to the next area simply by clicking on the edge of your view. The cursor also changes to indicate something interactable, and those points of interest can be inspected, used, or possessed as is appropriate. Those first two options should be self-explanatory but possession is the important one here, because it’s how you’re going to solve many of the puzzles in the game. As a ghost your little ladyfriend is limited in how she can affect the world, but possessing items allows her to fly around as that item and place or use it wherever it is needed.

You can only possess one item at a time, of course, and they stay where you leave them. This makes inventory management in the absence of an inventory a key aspect of the game, one that contributes largely to the steep difficulty. You might come across a wooden horse you can possess and have no idea what to do with it, and then find a note an hour later about a wooden horse and not remember where you left it. Most items are used in the immediate vicinity but not all of them, and the ones that need to be taken elsewhere can really throw you for a loop. Figuring out where items need to be used also figures heavily into what ending you get, making the best ending a steep challenge to reach.

That’s only half of the puzzles, mind you. The other half are more conventional code-cracking, lock-picking, button-pressing adventure game puzzles. There’s plenty of creativity and variety to find in them, everything from locating the correct key on a key board (a wall-mounted board of keys, not the thing on your computer) from reading notes to typing out an audio code in a text parser. You’re also going to contend with more esoteric puzzles like figuring out a sequence of gravestones from poetry or reaching a purely arbitrary weight on a scale, and it’s here that the precipitous difficulty rises up once more. I’m no point-and-click pro, I resort to walkthroughs on plenty of titles, but Goetia reached a point where I had absolutely no clue how to proceed, and even after consulting a walkthrough felt unprepared to follow through.

What’s crazy is that the puzzles aren’t bad, they’re really that hard. They’re not illogical like cat hair mustaches or brutal like throwing a shoe at a cat so you don’t die an hour later. Goetia’s puzzles are just extremely puzzling, fully expecting you to pore over every note and process every potential connection between clues. The solutions make sense when I look them up, but at the same time I have a hard time imagining how I would have sussed them out myself. To be fair the game really tries to help you along, with your ghost girlie often musing out clues when she find something important and your journal listing similar suggestions at each milestone. But you’re still going to have to be paying attention and thinking outside the box, because some of these puzzles punch right through the box into seemingly non-Euclidean space.

I’m not even sure the difficulty is a shame or not, because like I said it’s not at all unfair. It’s a very challenging game, and it fits with the excellent atmosphere of ancient secrets and ghostly intrigue. Waking up dead and alone decades after you lived would be a challenging situation for anyone, and answers would not come easily. They certainly don’t come easily here but they’re worth chasing down, presented in detailed, moody graphics with some delightfully reserved sound design. Goetia is a gem of an adventure game but it’s edges are sharp enough to cut, and you’ll need to be even sharper to even reach the end of it. 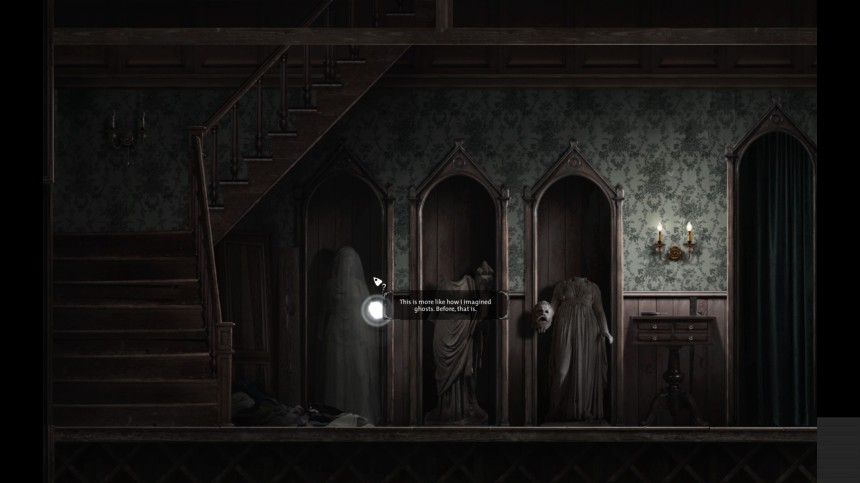