Low-resolution games catch a lot of flak for being ugly or low-effort, but there’s artistry to even simple looks like that. Beauty isn’t why I’m a big fan of the look, though. It’s common knowledge in entertainment that the less you show your audience, the more their imagination can fill in the gaps. This can be a huge boon to horror in particular if the scene can be set to pique the imagination in just the right way, and it’s why games like The Last Door and IMSCARED work so well. It’s why FAITH works at all, in fact, because a more grounded or serious look might not sell the grim events quite as well.

You play a Catholic priest one year out from a fateful exorcism in the wilds of rural Connecticut. There were only two survivors of that horrible ordeal, and your guilt compels you to drive back out and finish what you started. You’ll do some snooping around in the woods to reveal some backstory on the place, then once you’re in the house it’s up to you to put an end to what you find there. All you have to carry you through is, well, your faith.

That’s not just poetic license, either. Aside from movement you have one action button, and it’s pray. Holding your crucifix aloft you can pray souls out of ominous objects like stones and graves and rubber duckies, leaving behind notes that reveal the aforementioned backstory. Prayer also dissuades or damages the more aggressive presences you’ll encounter, so long as you’re actually facing the threat. It almost feels a bit like a spiritual horror take on the hunting minigame from Oregon Trail, thanks in no small part to the similarly chunky aesthetic.

The look of the game is what I really want to focus on, though, because without it I’m not sure it would work as well. Early on, during your forest sojourn, you’re going to be accosted by something. It’s just a blocky critter on the scan-lined screen but the way it moves and the shape it takes are likely to trigger that primal terror part of your brain that keys off of something being very, very wrong. Were it a fully-modeled and textured creature it would fall prey to more scrutiny from players, surely appearing horrifying to some but silly or nonthreatening to others.

It works because it’s a blocky mess, because your brain fills in the rest based on that primal lizard reaction you have to it ambling towards you. The sound design deserve significant credit here as well for picking up with the static-strained synthesized voice that screeches near-incoherently at you. That jarring audio along with the unsettling imagery help turn a white blob chasing your blue blob into nightmare fuel that’ll make you jump even after the twentieth time it screams out of the woods at you. And the same is true for scares throughout the game; every fright gives you just enough visual clues to know what the threat is, but enough vagueness to make it something personally afflicting in your mind. 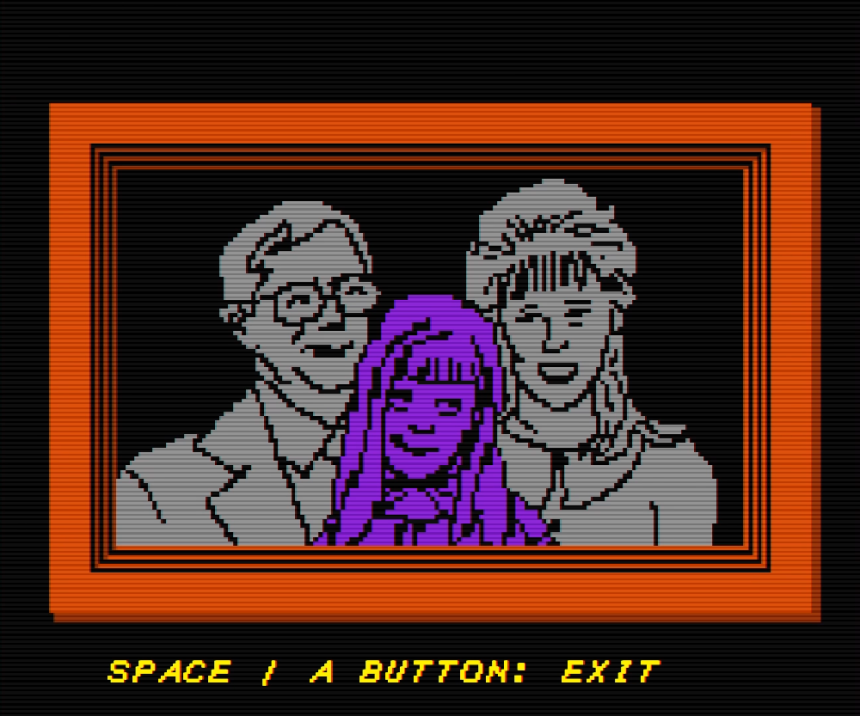 There’s barely anything more to the gameplay than exploring the house and its environs to find the next spooky happening, and I admit the glacial pace your character moves at can make this tedious. Some of the clues don’t follow clearly from one part to another, making progression possible more through lack of options than a defined path. It fits with the ancient Atari look and feel, though, right down to those lovely, familiar scan lines. Presentation can go a long way in any game and it does significant work here, both in making you comfortable and creeping you out. FAITH is an excellent example of doing so much more with less, turning the most basic graphics and sounds into something thrilling and engrossing.