Back in the heady NES era, auto-scrolling levels always seemed to cause people the most stress. In a game like Mario or Castlevania where you normally get to explore or measure your movements, scrolling forces you to think on your feet and act under duress. As tends to happen in this eclectic genre, someone took that concept and applied it to the traditional roguelike formula. But rather than simply turn a stressful game design into a pressure-cooker, One Way Heroics expands on every aspect to produce something unique, engaging, and addictive. 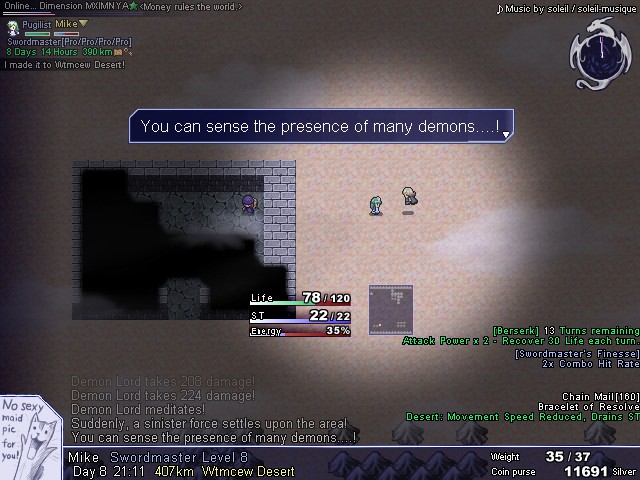 The Land of Generic Fantasy is in peril, and the evil Demon Lord is to blame. For any other game this would get an eyeroll from me but here the drama plays out over dimensions, not continents. Each world is threatened by an inexorable wall of darkness that moves ever rightward, consuming all in its path. Only by defeating the Demon Lord  can the darkness be stopped, at least in that particular dimension. With little time to prepare, you must scour the land for equipment and allies before running afoul of your nemesis in a climactic final encounter.

Don’t let the ceaseless march of oblivion put you off, because this is a traditional roguelike at heart and that means everything is turn-based. You can sit there as long as you want, staring at the unmoving void or frozen enemies, all waiting for you to take your damn turn so they can get back to terrorizing the land. That time will be invaluable for planning your moves, especially if you get cornered in a dungeon being consumed by the darkness or end up stuck behind a mountain range. It’ll also give you time to use your special abilities or consumables you’re inevitably going to hoard your first few runs.

Once you get a feel for the game, staying several steps ahead of the murderwall will be of little concern to you. Instead, you’re going to have to come to grips with the off-beat progression system this game has. If you’re coming off other traditional roguelikes you may be expecting a fair spread of weapons, armors, and consumables spread across the land for you. On good days that’ll be the case but One Way Heroics has no qualms with denying you any of those, even simple foodstuffs necessary to keep your heroic avatar chugging along. New gear is extremely sparse, food items need to be bought if you hope to keep a reserve of them, and enemies rarely drop anything besides some modest coin. Even treasure chests hidden away in dungeons or lakes must be bashed or lockpicked open, and so are worthless without a special skill or plenty of time to get through their unexpected defenses.

The game’s uneven power curve will keep this from appearing much of a problem for awhile, but soon enough you’ll run across a minotaur or a golem or just a really beefy bandit who explodes you in a hit or two. I’m sure your first few deaths will be quite sudden, and the game is nice enough to advise you post-mortem about how to improve your chances. You’ve got some powerful innate abilities to overcome tough monsters and tight spots with the darkness, and you’ll need to use them freely to get through the sudden difficulty spikes. The bright side of the difficulty curve is that it’s still easy to learn and overcome, and once you start sticking it to the Demon Lord the real fun can begin.

One Way Heroics does more than stick a pursuer onto the roguelike formula. The dimensions your adventures play out in aren’t just called that for kicks, they can have wildly different topography, unique landmarks and treasures, or powerful house rules like no leveling up or no item drops. Every time you start a game you can pick a new random dimension, a specified dimension, a dimension you failed to conquer before, or one of three daily challenge dimensions featuring those wild house rules. And this is on top of the numerous character classes and unlockable perks which can start you off with handy stat boosts, extra skills, or even a pet. Plus there’s the dimensional vault which lets you carry over helpful items from one world to the next.

It’s the simple fun of running riot over a fantasy world in short sessions, mixed with an expansive backend full of unlocks and game modes, that makes One Way Heroics special. That key one-more-round appeal is here in full force, taunting you to try again every time you get crushed by a skeleton or devoured by the darkness. There’s something to be said for the unique presentation as well, a veritable circus design of windows, text panels, indicators, and progress bars. It can be daunting and downright ugly at first, but after awhile even that starts to feel comfortable and familiar.

The graphics are certainly not a strong point of the game, featuring basic RPG tiles, tiny sprites, and a disappointingly bland palette. Nor is the sound design of much note, though it succeeds in capturing that JRPG upbeat heroism as you travel from fields to deserts to tundra. But it fortunately lives in a genre dominated by ASCII art and silent combat, and besides none of this stops the game from just being flat-out fun. One Way Heroics starts out with a bold gimmick and builds it into a vast and entertaining experience, one that gets deep hooks into you once you learn how it all works.