I’m pretty sure “teen princess management visual novel” is enough to get serious side-eye from most folks, but what if I told you this one takes royal intrigue seriously? Despite the anime characters and outfit selections, keeping track of court politics and avoiding death by poisoning are going to be your primary concerns in this one. There’s a surprising amount of depth in the decisions you need to survive to coronation, and plenty of ways to get sidetracked into an early grave. In fact, this one is so technical that it might even put off fans of intrigue from the other end, with the impressive volume of numbers and skill checks to keep up with. 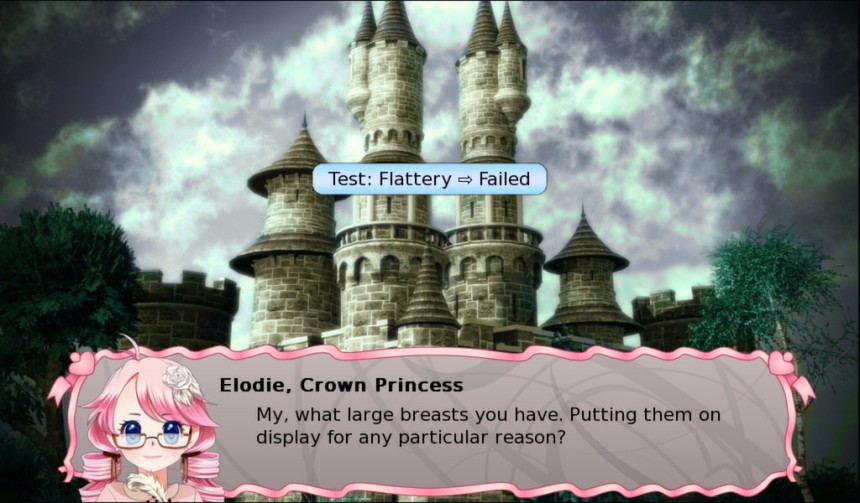 Elodie is the fourteen-year-old princess of Nova, and with her mother gone is on the fast-track to the throne. With the guidance of the outgoing king she has a little less than a year until coronation, leaving plenty of time to learn, train, and die. The numerous dukes and regents of the land will not miss this opportunity for a power play, forcing Elodie into situations where she must choose suitors, settle disputes, wield military might, and root out spies. As if that weren’t enough there are the mysterious circumstances of her mother’s passing to look into, and equally mysterious powers at work surrounding those events.

Put any fantasies of some kind of anime Crusader Kings out of your head, because this is still a visual novel and that means lots of reading and not much action. For each of the 40 weeks until Elodie’s coronation, your main concern will be selecting her two subjects to study. Once her classes are complete, you’ll read through the week’s key event which can branch or offer choices based on the skills she’s studied up on. The week ends with your choice of activities that change her mood, which in turn provides bonuses and penalties to studying certain subjects. The actual gameplay, then, is figuring out which skills to train when, and how to get Elodie’s mood to support what she needs to study.

This is no mean feat, because there are over 40 skills to train all on scales from zero to a hundred. Their applications won’t be obvious until you’ve attempted a few runs either, unless you’re somehow clairvoyant enough to know what value flower arranging, naval strategy, or falconry will have on the road to coronation. Skill checks can also be shockingly steep, as I failed one I had at 70 not even halfway into the game. With the added layer of the mood system which can essentially lock you out of training certain skills, you really need a plan for character progression and you’re very much not going to have one on your first few runs.

You’ll come across quite a few ways to die here, whether it be on the point of a sword, wracked with poison, or mystically suffocated. Each time you perish, you’ll hopefully make note of what skill checks you failed when and take steps to overcome them the next time. Events are not random in Long Live The Queen, the same things happen on the same days (though the story can branch significantly based on choices). That means you can identify ideal paths and how to reach them via skill training, which forms a gentle if potentially tedious learning curve. Some of this tedium is eliminated by the promise of finding new scenes and new ways to die, but ultimately it’s still very technical, number-driven trial-and-error gameplay. 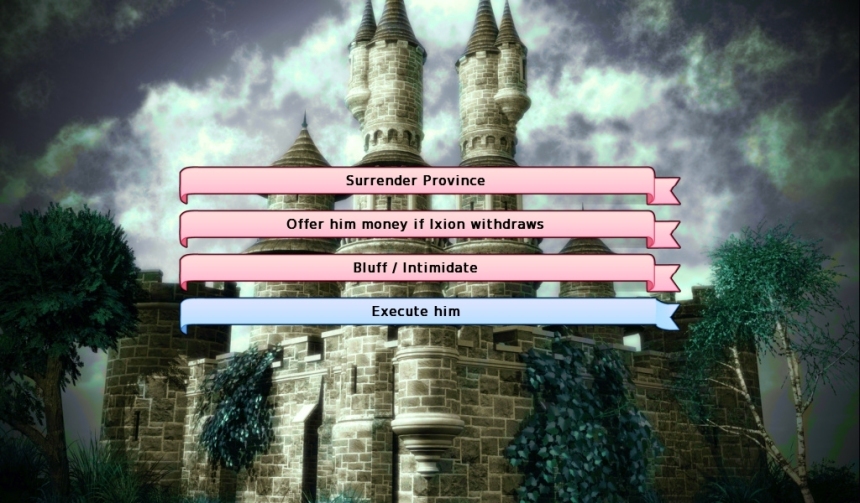 Assuming you get into the surprisingly detailed story though, this shouldn’t be much of an issue. There’s a lot to learn about the world and the nobles here, complete with elaborate titles and dense webs of intrigue. As light and fluffy as the anime art style makes it look, there’s some real Game of Thrones gravitas in the narrative especially when you’re passing judgment on murderers or navigating a ballroom of suitors. You’ll also get a load of backstory when studying up on subjects like history and foreign relations, actual fleshed-out facts about the subjects within the game world.

You can run through a single game of Long Live The Queen in thirty or forty minutes, but it’s going to take you hours upon hours to suss out what you need to see everything the game offers. Mathing out skill checks isn’t going to be compelling gameplay for everyone but the detailed story and narrative branches do a lot to make it appealing. I’ll admit not being very invested on my first few runs but once I found hints at some of the more obscure branches, I was compelled to see them through. I haven’t actually managed to make my queen live very long yet but even failing to keep her alive has been fun, and only gets more interesting the deeper you dig into the many plots hidden here.