It’s been ten years or so since I first played Meritous, and the memory remains fresh in my mind. I was on an indie kick, inspired by free releases like Spelunky and Cave Story to scour the internet for the next big hidden gem. Meritous is definitely big and definitely a gem, but it obviously never reached the same heights that those other two games did. There are reasons for that we’ll get into, but nothing that unseats it as a formative indie experience for me.

What story there is lies solely in the help menu, describing the massive subterranean dome the game takes place in. Somewhere within its vast network of chambers is an artifact of untold power, and you’re out to get it. The only tool you have in your search is your psi circuit, a chargeable weapon that releases waves of energy that crystallize enemies. Fighting through the seemingly endless creatures of the dome eventually leads you to the artifact you seek, as well as an unexpected presence guarding it.

The story is obviously not the big draw here, but rather the unique game world this all plays out in. Meritous plays sort of like a discount Zelda, controlled from a top-down perspective overlooking a vast array of chambers. If anything, “vast” is a gross understatement here though. The game world consists of fully three thousand rooms, all connected in a giant network you’ll need to map out. Most rooms are empty except for enemies but enough have fast travel and save points to make exploration fun instead of a chore, and you’ll need to dive deep to find the many artifacts and bosses hidden away in the maze. 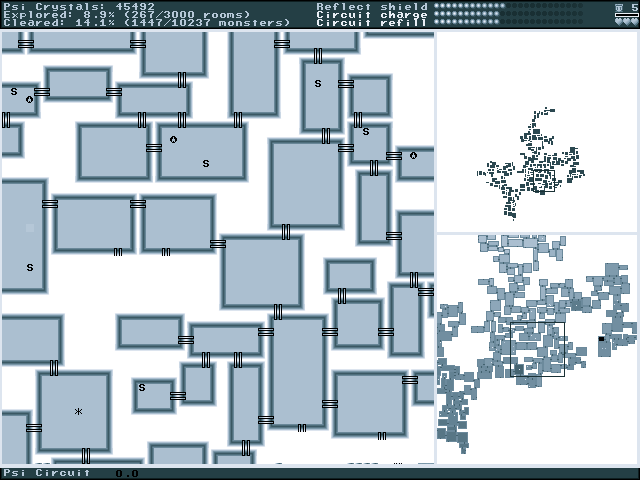 Scattered across these thousands of rooms are over ten thousand foes to overcome with your one single weapon. Your psi circuit is a one-button attack, charging up while holding Space and firing when you release. It sends out a giant shockwave that turns enemies to crystal, and comes with helpful indicators telling you if foes are within range, and if your charge level is enough to finish them. You have to let it cool down just as long as you charged it up, though, so survival depends heavily on intelligent use of your one unique weapon.

It’ll also depend on your dodging skills, because Meritous is very much designed in a bullet-hell vein. The most basic enemies will sling huge bursts of shots your way, and getting hit interrupts your psi circuit charge. On the bright side, your attack can also turn shots into crystals just as it does to enemies, and those crystals are used to upgrade your attack and build up a reflective shield to help you weather particularly harrowing chambers. Enemies will also chase you between rooms once they see you so there’s a great deal of strategy to both exploring and using your powers. 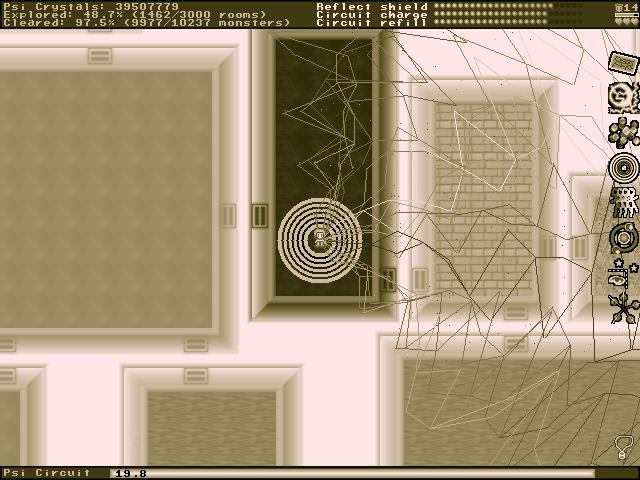 For a free game, Meritous represents an immense amount of content built around solid and creative mechanics. It can certainly become repetitive exploring thousands of mostly featureless rooms but the enemy variety and constant progression do plenty of work to keep it fresh. The simple 2D graphics are easy on the eyes and feature some lovely palettes, and the soundtrack is oddly intense and adds to the otherworldly atmosphere of your surroundings. It’s a remarkable game through and through, doubly so for coming into being so early in the indie wave we’re still swept up in now. Hopefully it still serves as inspiration for developers looking to give their games unique mechanics or structures.