I knew pretty much all there was to know about Lara Croft before I ever even played a Tomb Raider title. Despite my deep and abiding love for Indiana Jones I never had any interest in her games, not until the distant Guardian of Light made it to Xbox Live Arcade. That primed the big Tomb Raider reboot to be the perfect place to jump on the raiding train, especially with its open world features and collectibles that felt included just to appeal to hopeless packrats like myself. I expected a bit of spectacle with it but what I got far surpassed my expectations, both in enjoyment and intensity.

Forget the T-rex slaying supersoldier Lara you might remember from your childhood, this one is a humble researcher on an archaeological expedition. The crew of the research vessel Endurance is on the trail of the lost Japanese kingdom of Yamatai somewhere in the west Pacific, and ends up shipwrecked on a mysterious island. Things go south for Lara and her friends very quickly as the island’s ruthless inhabitants hunt them down for their own ends. Pushed to her limits, Lara begins to grow and adapt into a warrior who can fight back against her foes and save her friends from threats both familiar and fantastic.

“Pushed to her limits” is not just flowery language, as much as I like being flowery. The hallmark of the Tomb Raider reboot is struggle, illustrating exactly what dire circumstances transform Lara from a bright-eyed scholar to a stone-cold killer. In the first twenty minutes of the game she wades through filthy water, eats a chunk of rebar to the gut, and weathers a brutal assault. The game never really lets up on poor Lara either, reuniting her with friends before cruelly snatching them away, sending aircraft and entire villages tumbling at her, and sticking you with some of the most disturbing death animations around if you foul up certain escapes. Honestly it can feel like a horror game at times if you’re not so good at avoiding the quick-time-event fatalities. 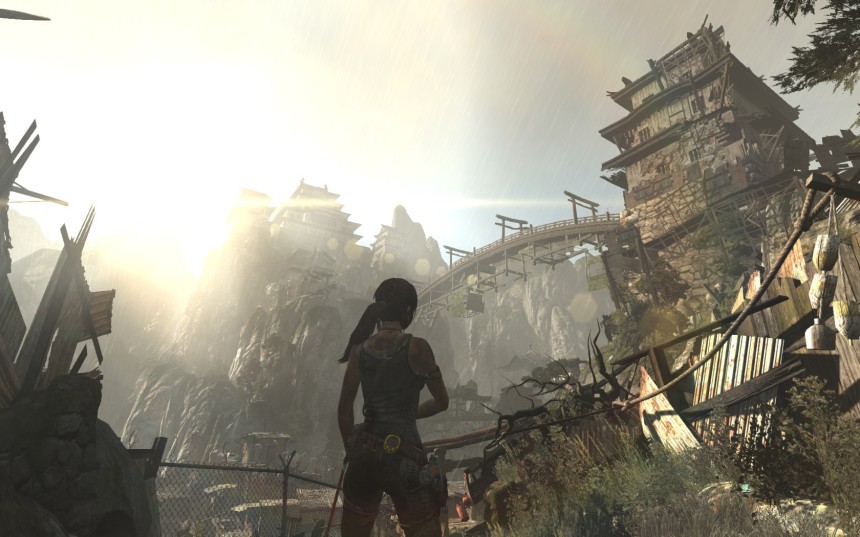 I’m getting this out of the way because it’s an important caveat to an otherwise magnificent game. You’ll need a bit of a strong stomach to get through this one, or at least suspension of disbelief that wading through pits of fouled blood won’t kill a person via disease outright. Lara’s journey is a harrowing and stressful one but it’s also full of incredible sights and setpieces to experience. Early on you have to climb a radio tower and the sequence is done so well that I began sweating and second-guessing my actions, even while marveling at the incredible scenery. The many escapes from collapsing or exploding structures are done just as well, and the story beats that accompany them help build the legend of the warrior woman Lara becomes under your control.

In terms of control, Tomb Raider plays much like other third-person adventures like Arkham Asylum or Shadow of Mordor. The melee brawls of those games are traded for fast-paced cover shooting and vicious ice-pick takedowns here though, so if you were looking for more blood with your tower-climbing and spelunking this will do the trick. Lara isn’t Rambo (yet) so your best options are always going to be stealthy takedowns and long-range gunning, though later in the game the robust upgrade system opens up additional options for close-combat management that can alter your playstyle. Weapon upgrades also provide you more reliable tools for staying in the middle of the fight and always being the last one standing. 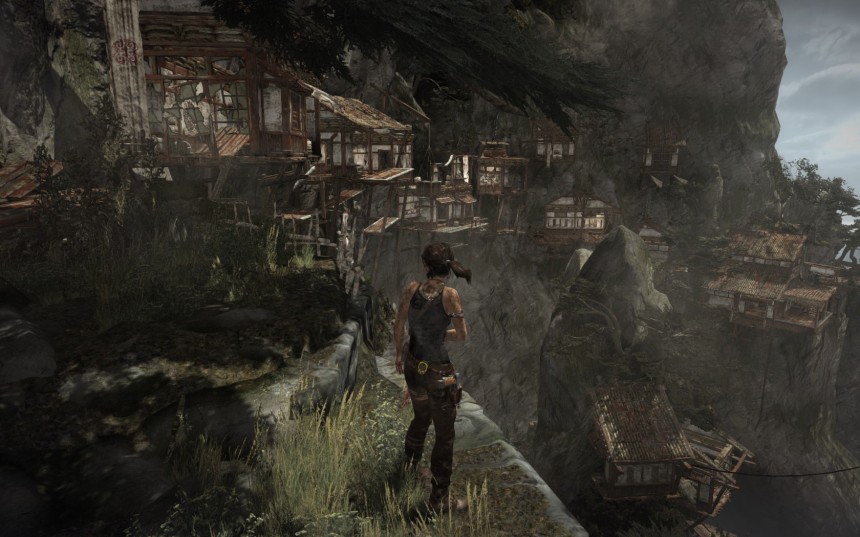 The real meat of the game is the exploring and, dare I say it, tomb raiding, and in these areas it does not disappoint. The vast island you find yourself in is divided into discrete regions that can be fast-traveled between once you establish camps in them, and each contains a variety of artifacts and notes to turn up. The collectibles are very well done here, providing valuable backstory on the bizarre events in the island’s history and entertaining challenges in reaching them. The tombs themselves are by far the highlight of the game, cleverly-designed puzzle dungeons that will tax your brain at least in a small way before allowing you access to the historical riches within. If I were to lay one real complaint against the game it’s that there aren’t enough of these tombs to raid, both because they’re so entertaining to raid and because it’s the name of the game for God’s sake.

Even four years out the graphics are breathtaking at times, tracing every detail of ancient villages and ruined bunkers in the very grain of rotting wood and cracked concrete. Locations look both real and fantastic, images right out of National Geographic of places you can barely believe exist on the same planet as you. Vast caves, cliff-side temples, and snowy peaks await here, matched with some expert sound design that brings it all together with meaty impacts and threatening booms. It’ll take you nearly twenty hours to see everything this title has to offer, and every minute of it promises to be an incredible journey. I may have missed out on Lara’s early adventures but this reboot does more than enough to make me a huge fan, and eager to see what comes next.