The gaming landscape is vast enough that truly unique games can still emerge from the field, either through never-before-seen designs or groundbreaking combinations of existing systems. Hand of Fate exemplifies the latter, a game composed of familiar parts assembled in such a way to create something singular. But its success stems only in part from its uniqueness, because the expert care and polish that it is presented with makes it an absolutely engrossing experience from start to finish. 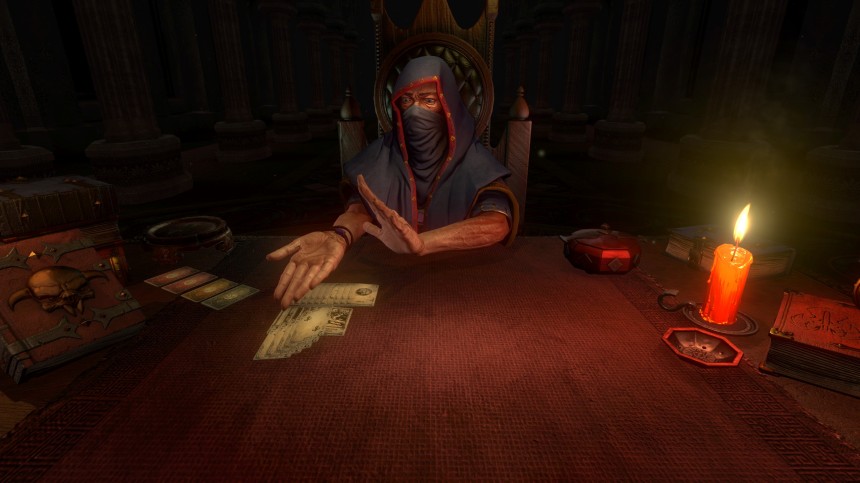 You have been invited to the table of the enigmatic Dealer, a reclusive mystic who challenges guests to games of cards. We’re not talking bridge or blackjack here though, we’re talking games of life and death. The Dealer’s deck approximates a hero’s journey through treacherous lands to vanquish deadly monsters, full of ambushes and chance encounters. To embark on these journeys, you must assemble your own deck of equipment and events which will determine what you find as you fight your way to your nemesis. Your success will rely as much on luck as it does your skill with both card and sword.

As much as I love waxing poetic about games, I’d be doing you a disservice if I didn’t spell out exactly how the game is played. Before each round you build two decks using cards you’ve unlocked, one of items and one of encounters. The Dealer mixes in non-optional cards like bosses and enemy ambushes and then lays out a grid of cards from your encounter deck to explore. Moving your token onto a card brings up a short text segment about what’s happening to you, often with choices to make and risks to take. For combat, you are moved to small arenas where you battle enemies in third person with your arsenal of weapons, shields, armors, artifacts, and blessings. 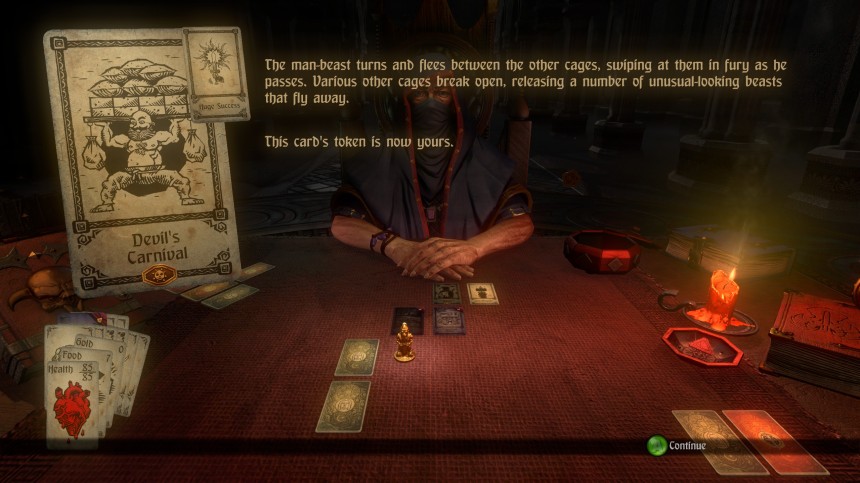 It’s a board game, one formed at random from your choice of deck and different every time you play. It’s dynamic as well, for some of your choices force new cards to overlay existing ones, usually to continue plot threads or give you destinations for quests. Some of the items you find can reveal important cards in the layout but in general they’ll be face-down, forcing you to explore carefully. Each area has an exit to another grid of cards until you reach the end and locate the boss. The end effect is a very roguelike dungeon crawl, working your way through unknown environs toward a goal while maintaining the resources to get there without dying.

Death will end your attempted run, lest you forget this is a roguelike, and death can come in a number of ways. You have three figures to track as you trek, your health, your gold, and your food. Health and gold are just what you’d expect but food complicates their management, because every time you move to a new card you must consume a unit of food. Eating restores a small bit of health but when you run out, you’ll lose health for each step. Buying food from shops or seeking it out as rewards is key to survival, especially since food itself is used in many encounters to barter for better options. Encounters themselves will likely never kill you outright but can put you in terrible positions by sapping your food, your gold, or even your maximum health.

Combat is the most obvious place you can die, but if you’ve ever played an Arkham or Assassin’s Creed you should be well-prepared for this. Generally you’ll be facing crowds of enemies but your spry avatar can interrupt most attacks with his own, block and counter with his shield, and execute downed enemies with a lengthy series of blows. Using only the directional stick and attack button you can float from foe to foe, beating them down in a ballet of brutal swings. Special powers granted by artifacts and blessings can have a big impact here as well, dispatching some enemies outright or even earning you extra gold or health for attack combos or kills.

While all of these elements form a unique and engrossing whole, it’s the presentation that elevates Hand of Fate to the next level. Aside from the combat interludes you spend the entire game seated across from the Dealer, and he is not a quiet fellow. He’ll muse about the potency of his minions, judge your actions, drop hints of concern, and so much more that you would expect from a fully-formed character. With mere mentions he hints at a wider world and tale beyond the table, and then he just as easily chides himself for making a card too powerful. The Dealer also manages his table with magical flair, moving and shuffling cards through grand gestures and the delectable sound of cards fluttering against each other.

There are other aspects of the presentation that charm, such as the crisp graphics and expert sound design. The only place the aesthetics falter is in the battle animations, which look far stiffer than the feel in practice. Outside of that though, it’s a polished, charming title that will last you a great many hours. Story mode encompasses twelve challenges, and there’s an endless mode where you can continue to chase down new cards and secrets. With so much offered in such a gratifying package, it’s hands-down on of the most unique and enjoyable roguelikes I’ve tried.