Perfecting a formula is a noble goal, but the most important aspect of a great game is the fun factor. Not every system and challenge has to be tweaked just right, they have to be fun to work through. Dungeonmans gets that, and perhaps gets it better than almost any other roguelike out there. I started my adventures skeptical of the traditional mechanics and limited skills and sudden difficulty spikes, and soon found myself not wanting to stop. It doesn’t all fit together perfectly, but it fits together in a ridiculously fun way that I can’t seem to quit.

Guess what a dungeonmans is? It’s a mans that raids dungeons, of course! You’re responsible for an entire academy of aspiring dungeonmans, in fact, playing as their newest graduate on a quest to defeat some vague evil vaguely off to the southeast. Your journeys across the procedural world and into the procedural dungeons will yield loot for your mans and artifacts for your academy, increasing the former’s odds of survival and the latter’s capacity to aid future dungeonmans when your current one inevitably expires. And perhaps by building up the academy to legendary stature, you will one day cultivate a mans great enough to raid that final dungeon.

At the core of Dungeonmans is a wholly traditional turn-based roguelike, inspired by the ASCII deathtraps of yore. You scoot your mans across a grid of dungeon tiles, bumping into foes to defeat them and hoovering up the loot that drops. In place of letters and numbers are lovingly-rendered sprites of burly men, gooey slimes, and piles of coin. You’ll never misunderstand what you’re facing thanks to the detailed art and striking particle effects that highlight bosses and add real weight to the skills being thrown around. Screen shakes and massive explosions give Dungeonmans far more life than any game of NetHack you’ve played.

Lively too are the dialogues and item descriptions you’ll find no shortage of in your travels. As the name suggests, Dungeonmans takes a tongue-in-cheek approach to traditional dungeon diving on every level. Your foes include gelatinous geometry, bees that literally practice carpentry, giant pangolins, and cockney hooligans. Equipment is crafted from the finest Burlylium and Crushonium, yielding enchanted beatsticks and gladiator skirts. And every line spoken by you or anyone in the game is dripping with sarcasm and wit. It’s the kin of humor that could grate over time, but is smartly relegated to item descriptions and dialogues between dungeon runs, never overpowering the core gameplay.

What does impinge on the gameplay are some of the unpleasant holdovers of the genre. Roguelikes are tricky things to balance, especially coming from its dark and brutal originators. The top killer of your dungeonmans will no doubt be difficulty spikes, usually champion monsters far beefier and deadlier than the chaff you’ll cut through to reach them. Those with elemental attacks are the worst, because you probably won’t be paying much attention to resistances (or really know how to raise them starting out). The game certainly tries to warn you with general difficulty levels posted for areas of the world, combat log observations about powerful enemies, and glowing auras singling out bosses. But you’re still not going to know how you stack up until you go toe-to-toe, and by then it can easily be too late for your poor mans.

There are other annoyances to single out, like the item ID system that really just wastes your time (complete with an enemy that can UN-ID your items!) or the occasionally lengthy animations that break up the flow of turn-based combat. But despite these issues, I can barely stop myself from playing long enough to get angry about them. Even when I die after hours on a particular mans, I find myself immediately considering my next character. And that’s because what Dungeonmans does right is boil down roguelike combat to only the best parts, and layer loads of rewards over them. The skill system is limited in a smart way, leaving you just the core skills and passives you want for your style of mans. Combat can pass in a flash, enemies drop loads of loot, and the visual effects are lush and satisfying.

Then when the last foe falls and the blood pool on the cold dungeon floor, you haul your loot back to the academy and set about building the next generation of dungeonmans. Books, artifacts, and equipment can be donated to supply later characters. Gear can be melted down to make upgrades for current or future mans. Combat stats are tracked for the many enemy types in the game. And Proofs of Stremf persist between characters, allowing new mans to start with greatly improved stats. You can also upgrade towns you come across to access better shop items, or track down the final resting places of your previous mans for significant bonuses. 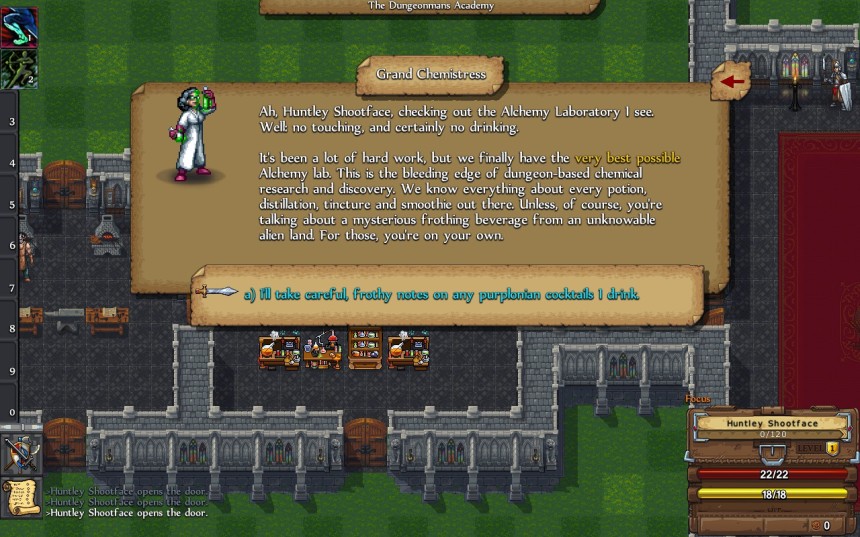 Above all, Dungeonmans is a game that wants to be played at your pace. The design of the random overworld gives you general difficulties for areas, and if a dungeon feels to hard you can always escape and shake down easier ones for better loot and more XP. Different dungeon and encounter types also offer different rewards so you can focus on developing however you want. And the overworld persists between characters so you don’t have to keep re-exploring, although you can always re-generate the world while keeping your academy if you’re so inclined. Any complaints about the game pale in light of how solid the core design is and how robust the progression can be. I expect to be dungeon diving with my mans for quite some time, with ever more to see and crush as the hours pass in a happy daze.