When was the last time you insulted a sheep into submission? Or complimented a mummy on his wrappings? Or engaged in a battle of charms with a vampire? Unless you’re leading a way more interesting life than the rest of us, or have already played Renowned Explorers, the answer should be never. And that should also be the big reason you ought to play Renowned Explorers, because the battles are nothing like you’ve ever experienced. They’re far more than battles of wits, far more than rock-paper-scissors strategy, and support a game far more charming and entertaining than most adventure jaunts you’ll find.

The Renowned Explorers are a club of intrepid adventurers brought together by a common love of antiquities, danger, and glory. They hold annual competitions to see who can amass the most prestige for themselves, and you just happen to want a piece of that. Assembling a crew with two other like-minded explorers, you embark on a series of five expeditions around the globe to uncover treasures and secrets for the world. If you play your cards right and use every tool at your disposal, you can claim the title of Most Renowned. Otherwise, you’ll leave behind little more than rumors of your last great journey.

At the heart of this title is something of a text adventure. Each of your expeditions sees you leading your crew around to points of interest in whatever region you’ve jaunted off to. At each point you’re given a description of what’s happening, and a load of choices in response. Depending on your decisions you might end up finding a hidden treasure, scoring some gold or research, battling bandits or natives, or pulling yourself out of some other dire predicament. These story snippets are the gears that power everything else in the game, and considering how many systems that covers it can be daunting to figure out how best to approach a simple text prompt.

Your options at each stop are usually presented with a percentage of how likely you are to succeed, which is heavily dependent on your crew, their skills, and other decisions up to that point. Characters are loaded with six different stats, a list of skills across multiple disciplines to learn, and slots for different pieces of equipment. Challenges may call for specific skills, completion of previous encounters, or sometimes just the luck of the draw. Success means scoring tokens which are converted to currencies used to gear up between expeditions, while failure can cost you stat penalties, supplies which are used to traverse the map, or resolve which works as your extra lives in combat. While the text portion of the game generally won’t end a run on its own, it can tee up a defeat in combat with mounting penalties.

Combat isn’t the main focus of the game, but it’s perhaps the most unique element. Encounters play out on familiar hex(ish) maps where you and your foes take turns moving around and using skills. The difference here is that instead of different weapons or attacks, you have three schools of abilities with wildly different effects. Aggressive actions are attacks, devious actions have negative emotional impacts, and friendly actions have positive ones. All of these when used on enemies deplete their spirit, and reducing it to zero defeats the unit. But everyone also has an emotion meter that tracks whether they’re happy or sad, and what specific emotion that puts them in. Furthermore, there’s an overall mood determined by the predominant actions on both sides which can incur huge (like 50% huge) bonuses and penalties depending on how the two teams are feeling. 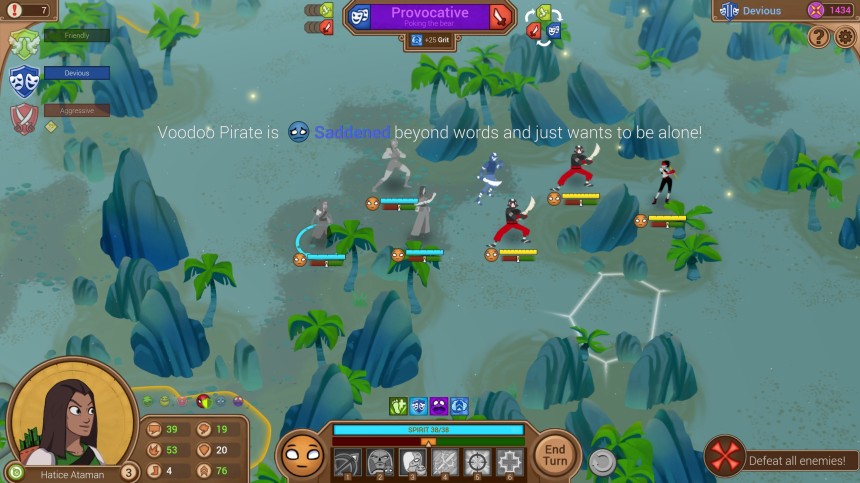 The interplay between these different approaches affords a wealth of tactical options. Each mood affects attack and speech stats, so a clever player will make their enemy enraged before hitting them to lower their armor, or sadden an enemy that’s about to attack to lower their speech. Items can play a part in this as well, boosting key stats or even giving bonuses when attacking enemies with certain emotions. Really you have enormous control over the approaches your team can take, but to succeed in more difficult areas you have to focus on one or two and stack up your bonuses for it.

The same is true for the resource game, as winning the game requires you to accrue enough renown to beat out the other explorers. Renown is earned from most things you do but there’s a ton of ways to boost your earnings, and ways to focus on a few resources to really pump your results. Gold is used to buy items, status lets you recruit an entourage that provides further bonuses from tokens earned, and research lets you unlock studies that produce all kinds of powerful effects. Choosing how to spend these currencies to build your renown machine is the real meat of the game, and mathematically-minded players may find plenty to chew on here. 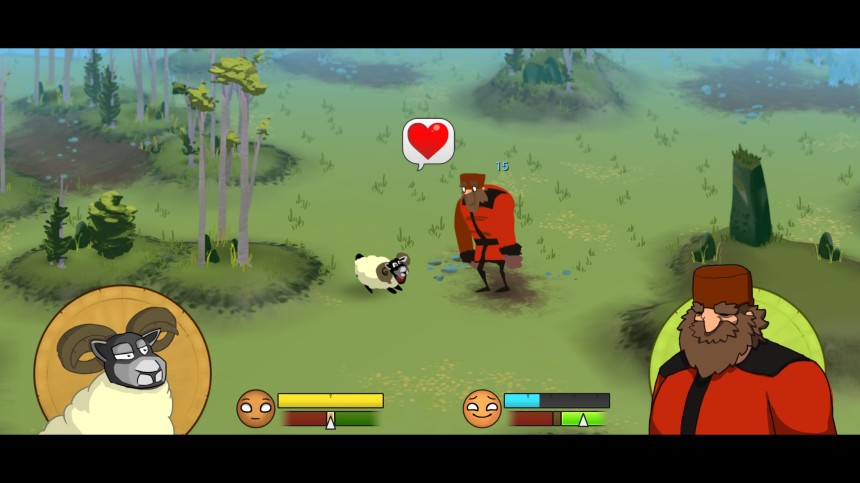 With a design this tight there’s not much to critique, aside from seeing the same encounters over and over as you sink more and more time into the game. The variety comes from the different crews you can assemble, and the different choices you make in building them up, but you’ll still end up reading the same passages again and again. It’s an issue the developers seem keenly aware of if the different expansion DLCs are any indication, and there are so many treasures to find and unlock anyway that it shouldn’t be too much of an issue. Wrapped up in such a charming presentation, it’s doubtful you’ll have any bones to pick until at least a dozen or two hours in. The unique strategy and combat may take some getting used to, but once it clicks you’ll have a hard time stopping yourself from launching just one more expedition.